Two former Byzantine churches of Istanbul, the famed Hagia Sophia and the Church of the Holy Saviour in Chora, which served as museums for decades, have been converted to mosques in the space of a month. This has raised concerns. Istanbul’s Greek Orthodox community knows that more is at stake than these two monuments. 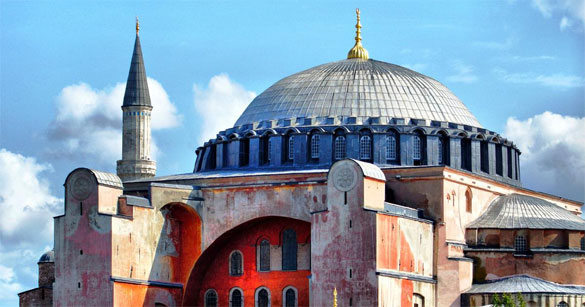 Istanbul’s Greek Orthodox, the Rum Polites, form the greater part of the flock of the Ecumenical Patriarchate, the traditional centre of the Eastern Orthodox Church. Having been numerous and influential during Byzantine and Ottoman eras, they now constitute a small minority of merely 2,000. The traumatic experiences they have suffered, including pogroms and expulsions, have caused them to become globally dispersed. But the Rum Polites continue to retain a strong connection to Istanbul and its Byzantine heritage, made palpable by architectural landmarks like Hagia Sophia and Chora.

Hagia Sophia and the Church of the Holy Saviour in Chora were revered churches of Byzantine Constantinople. Hagia Sophia served as the imperial church of the Byzantine Empire and awed with its architectural ingenuity. Chora was part of a rural monastic complex and was richly adorned by stunning mosaics and frescoes.

Both sites were converted into mosques by the Ottomans: Hagia Sophia immediately after the fall of Constantinople in 1453, and Chora half a century later. Then in the 1930s and 1940s during the Turkish Republic, Hagia Sophia and Chora were turned into museums, illustrating the secular ethos and Western-oriented attitude of the newly formed state. The figural representations in the mosaics and frescoes that were plastered over by the Ottomans were uncovered during extensive restoration projects in this period.

This republican resolution was undone when Chora and Hagia Sophia were officially re-converted into mosques after president Recep Tayyip Erdogan’s recent presidential decrees. 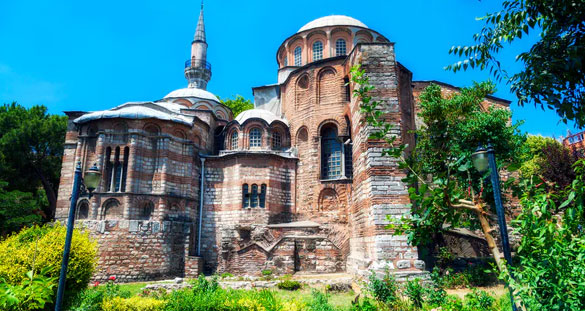 Church of the Holy Saviour in Chora, Istanbul, Turkey. Acsen/Shutterstock.com

The Rum Polites, as many other Istanbulites, fear that the conversion of historic Byzantine churches into mosques will lead to the decay of the city’s multi-layered history and cosmopolitan identity. Reacting to the conversion of Chora, Laki Vingas, the chairperson of the Association of Rum Foundations, said: “There should not be any competition between civilisations, especially in a rich cultural city like Istanbul with a history of being an imperial capital over 1500 years.”

As museums, Hagia Sophia and Chora embodied both Byzantine and Ottoman pasts, and became symbols of multi-faith co-existence. Their conversion implies a hierarchy prioritising their Islamic past over all other layers.

Erdogan’s decision reflects a rhetoric of conquest that heightens the alienation of Istanbul’s Christian past.

In his July 10 speech announcing the decision to open Hagia Sophia, the Turkish president highlighted how Hagia Sophia’s conversion would gratify “the spirit of conquest” of Mehmet II. On July 24, Ali Erbas, head of Turkey’s Directorate of Religious Affairs, gave the first Friday sermon at Hagia Sophia with a sword at hand, symbolising a tradition of conquest. Such a discourse arguably brands Turkey’s non-Muslims as re-conquered subjects and second-class citizens. 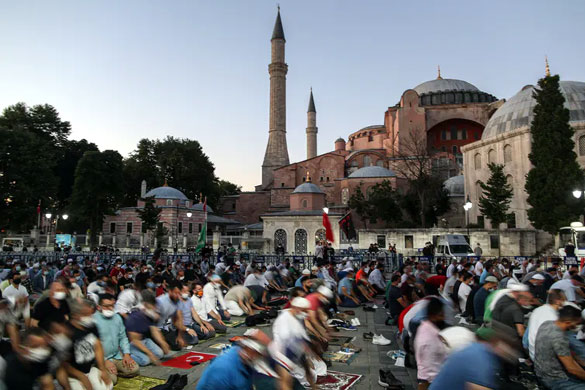 Supporters of Erdogan pray as they celebrate the decision to convert Hagia Sophia into a mosque, July 10 2020. Erden Sahin/EFE

Archbishop Elpidophoros of the Greek Orthodox Archdiocese of America, an Istanbulite himself, told the BBC that Hagia Sophia bears “special feelings for any Christian, especially for the Orthodox who are more directly connected with that monument”. He added: “I am a Turkish citizen, and I don’t want the state to have the mindset of the conqueror, because I am not a conquered minority. I want to feel in my own country as an equal citizen.”

In an equally personal and emotional statement, Bartholomew I, the Archbishop of Constantinople-New Rome and Ecumenical Patriarch, said he was saddened and “hurt” by the conversion.

What Is At Stake?

The conversions of Hagia Sophia and Chora into mosques may be down to Erdogan’s many problems, including his geopolitical power politics, his ongoing battle against the secularist legacy of Turkey’s founder Kemal Ataturk, his appeal to religio-nationalism to revive his electoral popularity, or his tactic to divert attention from Turkey’s economic tailspin. Yet as the Rum historian Foti Benlisoy has warned, it would be a mistake to think that it is only about petty gains in domestic politics.

Instead, Benlisoy contends, these acts of re-Islamisation or de-Westernisation are likely reflections of a “neo-Ottoman” orientation towards the building of an “alternative national identity” that rests on polarisation. Such cultural wars lead to a hostile climate, which, especially for vulnerable communities such as the Rum Polites, further jeopardises their survival in the city.

The community of Rum Polites is as much a valuable part of the city’s cosmopolitan heritage as are Hagia Sophia and Chora. Metropolitan cities like Istanbul must embrace their multicultural legacy in its entirety, both in its urban fabric as well as its cultural diversity, and create a safe place for conviviality. Otherwise, the city’s identity could be endangered.

Some monuments are so grand that they impact a broader population beyond the present city residents or even visitors; they belong to humanity. Yet they remain the prime source of reference for some locals, or their fellow brethren in the diaspora, whose identification with the city is embodied through these monuments. Such is the case with Hagia Sophia, Chora, and the Greek Orthodox community of the Rum Polites, in Istanbul and beyond.