The destruction, conversion and restoration of places of worship are not something new in history. Religion has been an important part of every civilization. The faith of ruler was supposed to be followed by his subjects too. Any deviation or call for a new religion was opposed vehemently if it was antagonistic to official religion.

Religious books document the struggles that prophets had to go through for opposing the official religion and many were put to death for their beliefs. The story of Islam is not different either. Caliphs under the divine mandate carried out conquests and the people of these lands were supposed to pay Jiziya, be rendered as second-class citizens, convert to Islam or fight with the Muslims to either turn up as conquered or triumphant. According to Dr Javed Ahmad Ghamidi, this was based on a divine mandate following Itmaam e Hujjat (conclusive communication of truth) and making the truth manifest on humans. This principle of Itmaam e Hujjat ended with the first generation of Muslims as most lands were conquered (Dr Shahzad Saleem: Playing God: Misreading a Divine Practice).

Later on, the caliphate got degraded to monarchy but the title Caliph was appropriated by monarchs. They carried the conquest spree, exploiting the religious jargon that granted purpose and unity to the Muslim army. The jurists also divided the world into realms coining terms like Darul Islam and Darul Harb. These both were supposed to be in constant tussle with each other, despite the fact that Darul Islam was ruled by multiple Caliphs (read monarchs) who mostly had different goals, ambitions and taste often contradictory and opposite to each other. So, this construction of Darul Islam as a monolith was quite a contrast to the lived reality of Muslims. 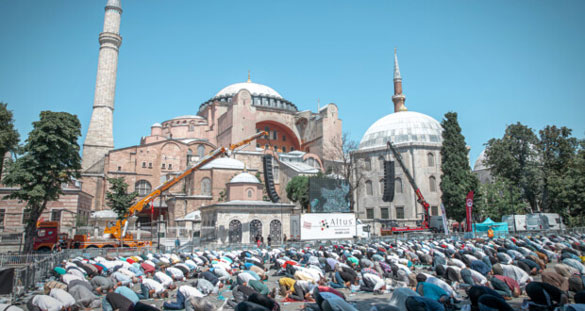 Constantinople was the seat of Roman empire and orthodox Christianity. Muslims conquered it in 1453 and converted the famous church Hagia Sophia into a mosque. In case of conquered territories, we find two types of views among Ulama and jurists. One school of thought upholds the fact that people, lands and every institution of the conquered territory belongs to the Muslims and they have every right to just occupy, utilize, repair, leave or destroy the religious places as they desire. But this view is forcefully contradicted by Quran in the verse, “And had there not been Allah’s repelling some people by others, certainly there would have been pulled down cloisters and churches and synagogues and mosques in which Allah’s name is much remembered.” (Surah Hajj:40)

So, churches and synagogues are described as places of worship as equal in reverence and respect as mosques are. So, occupying them forcefully or converting them is out of question. Prophet Muhammad (pbuh) did not destroy, occupy or convert places of worship, when he conquered Jewish territory in Khyber. Another school of thought believes that if there is a covenant signed with the rulers and religious heads of conquered territory that guarantee the protection of religious institutions then they are not supposed to be annexed or converted. They refer to the conquest of Jerusalem under second Caliph Umar and the covenant. Caliph Umar himself declined to pray inside a church when requested as he was apprehensive that after him Muslims may annex and convert the church into a mosque on the excuse of his having prayed there. So, even though there were no covenants the religious places still had amnesty from being occupied. This is proved by the fact that first Caliph Hazrat Abu Bakr, ordered his army not to destroy or annex, or attack places of worship or hurt anyone who has taken sanctuary in their premises. Clearly Islam upholds the sanctity of places of worship of each religion.

The spirit of Islam was often contradicted or not implemented by Muslim rulers. For instance, Hagia Sophia was a church that was converted into a mosque. Islamic prayers were held there from 1453 to1932. It is not essential whether Muslim ruler Sultan Muhammad Fatih purchased it or annexed it. But in spirit its conversion was wrong. But in 1935 Kamal Ataturk in his attempt to secularize Turkey, converted it into a museum. This move was opposed by a German Erkhard Ungar, who was member of the commission chaired by Aziz Ogan, that exerted great effort in making Hagia Sophia into a museum. Ungar insisted that the place of worship should remain open as it was and put a note of opposition into the report. Despite his opposition, the majority muslim commission went ahead and converted it.

Now in 2020, the judiciary in Turkey has restored the previous status that now reconverts it into a mosque. Recep Tayyip Erdogan has been cashing on the sentiments of Muslims and promoting Turkish history as collective global muslim history. This conversion has drawn a lot of appreciation as well as condemnation. The historical wrongs cannot be rectified, otherwise Kaaba too was full of idols, and many Hindu temples are built on the destruction of Buddhist monasteries.

A process of rectifying history will have no end. We have versions on history and its narratives, not absolute truths and facts. Turkey is sovereign to take decisions like these, similar to Indian judiciary that passed a verdict using the demolition of 500-year old Babri mosque in Ayodhya as an opportunity to allowing the building of a temple there.

If Turkey is a sovereign nation then why this hue and cry all over the world?

Why some Muslims in different countries seem to be jubilant at this decision?

Are transnational Muslim solidarity and sentiments alive in an era of nation states?

Has globalization led to the transnational citizenship and blurred the boundaries of nation states?

Why liberals are aghast at this decision?

The world has attained the status of a global village. Modern means of communication have rendered it possible for news to be relayed across the borders. Media shapes opinions and Muslims have bigger share of negative news. So, every news regarding Muslims in any part of the world is going to help reinforce the stereotypical image of Muslims as well as Islamophobia. Despite separate sovereignty of different Muslim states, the image of Muslims has been constructed as that of a monolith. It has been reinforced by the fact that many Muslims who have never even visited Turkey, are celebrating the judicial decision. They are mentally still living in the era of Darul Islam whereas nation states became an objective reality long back. Turkey will not allow any Muslim to visit it without holding a valid visa. Even for performing Hajj one needs a Saudi visa. Muslim Ulama, jurists and theologians still have not upgraded themselves or Muslim masses to the era of nation states where terms like Darul Islam and Kufr have been rendered redundant.

Muslims world over are dejected, suffering from variegated crisis and possess a very low self-esteem and confidence. Hence decisions like these certainly offer a respite, hope and a taste of success in an era mired with pessimism and failure. So they try to own, appropriate and exaggerate the Turkish judicial decision and romanticize it as a victory of Muslims. Nation states are a reality but modern means of communication certainly have led to the erosion of sovereignty particularly by the transnational corporations, giving rise to a popular culture particularly through media as tools of soft power. Although the states remain sovereign, they cannot escape from the opinions and influence of citizens and leaders of other countries. Also United Nations is a world body, whose signatories are supposed to uphold various universal norms, values, principles and fundamentals of its characters. Further it has led to another form of limited governing body, compliance of whose orders is essentials in various respects.

A few groups give the justification that Christians burnt down mosques or turned them into churches once they conquered Muslim lands particularly in Andalusia, so Turkey did nothing wrong. They forget this fact that two wrongs do not make a right and in that era it was something normal, but now times have changed. The religion of a ruler or leader is not official, as most countries uphold that states have no religion. So, this judicial step does not go well either with the muslim minorities in different parts of the world or with the spirit of Islam. Turkish Judiciary could have restored the church and masjid could have operated equally in the same arena. This would have ushered a new era in interfaith harmony. Instead this step reinforced the Islamophobic image of Islam being intolerant and supremacist, thus opportunities of Dawah (inviting to Islam) have diminished.

In the current times converting, annexing or occupying churches and synagogues is counterproductive. It may win Erdogan an election but it has turned away the hearts of millions of non-Muslims from pristine teachings of Islam. Leaders should not try to act like Prophets as if they are mandated by God himself. In case of Masjid e Zaraar in Medina, Prophet (pbuh) was mandated by Allah to destroy it as hypocrites used its space to hatch conspiracies. Now in the changed current scenario religion is an individual choice and nation states are a reality that have composite societies where both Muslims and non-Muslims are equal citizens. So any decision in any part of the world will have ramifications for others particularly Muslim minorities. Classical jurists could never conceive Muslims as minorities but the reality is that Muslim minorities do exist and rightly or wrongly, they are punished for the action of Muslim majorities existing elsewhere. Hope Muslim rulers and nation states consider this fact before constructing and executing their next adventure.

M.H.A.Sikander is Writer-Activist based in Srinagar, Kashmir and can be reached at sikandarmushtaq@gmail.com