Sultan Shahin's Open Letter To Al-Qaida Chief Ayman Al-Zawahiri: Your Pathetic Braying Is Not Going To Have Any Impact On Indian Muslims

Al-Zawahiri, your latest video message reveals the pathetic state of your half-a-century long campaign of seeking to radicalise Muslims around the world. Your once feared global Jihadi apparatus, the architect of 9/11, is now reduced to a state where it has to latch on to the Hijab of a 19-year-old college student in India to further its prospects.

Not a single Indian Muslim has joined your terror organisation since it was formed in 1988. Yet you formed in 2014 a branch of Al-Qaeda specifically for the Indian sub-continent. 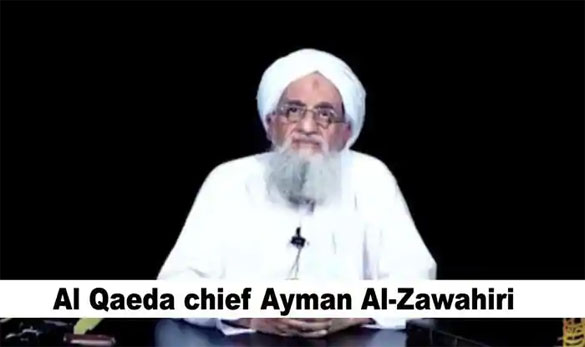 You have had no success in inciting Indian Muslims to join your version of Jihad. Yet, you persist. Now you see an opportunity in the Hijab controversy. You say the Karnataka student Muskan Khan’s struggle for her right to cover her head while attending classes will kindle the “spirit of Jihad” among Indian Muslims. You say her fight for her human rights has exposed the illusion of Indian democracy and our respect for human rights.

How ignorant you are, Al-Zawahiri, of the strength of both Indian Islam and Indian democracy. You have travelled to several Muslim counties on a fake passport. But you haven’t seen democracy in action anywhere. It’s difficult for you to imagine the strength of democratic institutions in India. We have several redressal mechanisms. Yes, Muskan has lost her case in one court, but she has gone to a superior court. If she loses even there, she will accept the verdict in good spirit. That is how the citizen of a democratic country behaves.

In any case, she must have learned by now from the open discussion we have had that hijab is not an essential part of her religion. Most Muslim women don’t wear a burqa or hijab. Yes, it is a part of Indian culture. Many Indian women of all faiths cover their heads. Personally, I feel they should be allowed to if they feel comfortable doing so. But, finally, we all submit to judicial verdicts.

I can hardly stop laughing, Al-Zawahiri, when I hear you talk about “the conflict between the chaste and pure Muslim Ummah and the degenerate and depraved polytheist and atheist enemies it confronts.” Which world do you inhabit I cannot understand? Where is this conflict going on? Yes, a few Islamist terrorists are killing some people, mostly Muslims on a sectarian basis. Since you lot started your terror campaign several million Muslims have been killed and a few thousand innocent non-Muslims too. But, of course, your blood-thirsty souls won’t feel any guilt or shame.

And what is this pure and chaste Ummah? Where does it exist? When Syrian Arabs are displaced in the civil war, they get refuge in neighbouring Turkey and Christian Europe. Not a single Arab Muslim country accommodates them. The only countries that condemn the persecution of Uighur Muslims in China are the Western Christian nations. When a Muslim lives legally in a Western Christian nation for a few years, he or she gets citizenship rights, but even if a Muslim spends half a century serving an Arab Muslim country, he won’t get even permanent residence rights.

You know Zawahiri, the concept of Muslim Ummah is absolutely bogus, yet you keep flogging it, because you have no other arguments to carry on with your terror campaign. Prophet Mohammad (pbuh) formed an Ummah in Madina bound by a constitution written in 622 (CE) called Meesaq-e-Madina that created a multi-religious state comprising Muslims, Jews, Christians, polytheists, and atheists. We Indian Muslims are part of an Indian ummah bound by our constitution which is considered the best in the world.

Also Read:  What Is Wrong With 126 Moderate Ulema's 'Open Letter To 'Khalifa' Abu Bakr Al-Baghdadi’, And Why It Will Not Work? This Moderate Fatwa Does Not Leave Any Leg For Moderate Islam To Stand On

Let me tell you why your Jihadi campaign has not and will not succeed in radicalising Indian Muslims. India is a land of saints and seers, Sufi and Bhakti poets. Ours is a land of composite culture, known as Ganga-Jamuni Tahzeeb. Have you heard of Guru Nanak and Guru Granth Sahib? Of course, you haven't? This inspirational scripture blends together India's Sufi and Bhakti traditions. It has inspired generations and continues to do so. India is a land of Rishis and Munis, Sufis and Saints who have all taught us to live together as a family. India's Sanatan Dharma, also called Hinduism is based on the concept of Vasudhaiva Kutumbakam, i.e., World is one Family. Hinduism considers all religions as valid spiritual paths to God. Ekam Sat VipraBahudhaVadanti is an Upanishadic statement,  meaning One God Is Worshipped In Different Names. Muslims, of course, are guided by Quranic exhortations telling that the world is one; God has distributed people into different races only so as they can recognise one another. Islam teaches us repeatedly in the Holy Quran that all humans are equal before God, regardless of race, class or nationality. Muslims have internalised these teachings, which have also been made popular by Sufi masters like Ameer Khusro with his poetry, which is a beautiful blend of Hindustani languages and Persian.

You al-Zawahiri, however, live in a narrow well. All your thoughts swirl around Ibn-e-Taimiyya, Ibn-e-Abdul Wahhab and Syed Qutb. Their desiccated, supremacist, violent version of Islam has been propagated in the Muslim world with the help of billions of petrodollars in the last four decades. But while it has somewhat affected Indian Ulema, it has not poisoned the minds of Muslim masses. They still live cheek by jowl with their Hindu, Sikh, and Christian brethren and will continue to do so, no matter what divisive tactics you try.

Ayman Al-Zawahiri, the Al-Qaida Leader Calls On Muslims to Attack U.S, In A Speech on the 18th Anniversary of the 9-11 Terror Attacks

Western Battle against Hijab to Be Part of War on Islamic Ummah: Al-Qaeda Leader Ayman Al-Zawahiri