Abbas Siddiqi's Communalism Is Dangerous: Muslims in West Bengal Should Beware Of His Militant Mindset, Throw Him Out Of Furfura Sharif Shrine Management; He Is No Sufi

1.    Abbas Siddiquee said that he would slit the throat of those who desecrated the Quran.

2.    He wants to be the leader of the Muslims of West Bengal.

3.    His statement has vitiated the atmosphere in the state.

4.    Clerics and activists of Bangladesh have condemned attacks on minorities. 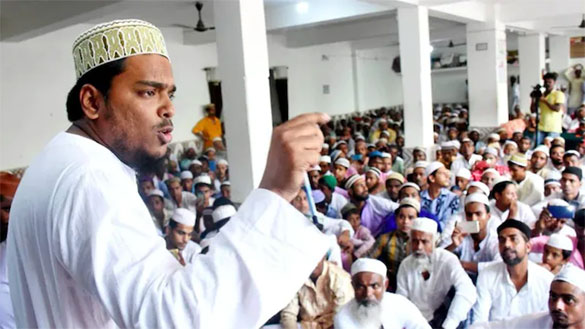 Abbas Siddiqui later released a video on Facebook and demanded strict punishment to those who attacked Durga Puja Pandals in Bangladesh. (File photo)

Abbas Siddiquee, the Pirzada of Furfura Sharif shrine and head of the so-called Indian Secular Front had vitiated the atmosphere of communal harmony in West Bengal by saying that those desecrating the Quran should be beheaded. He had made the statement in a programme in North 24 Parganas referring to the incident of desecration of the Quran at a puja Pandal in Bangladesh during the Durga Puja festivals last week. His inflammatory statement was being seen as an attempt at provoking Muslim youth of the state to unleash violence.

With this disclosure, now it is clear that the incident was a conspiracy of fundamentalist and communal elements to create unrest in the country by causing a communal frenzy.

It should be recalled that ever since the coming to power of Shaikh Hasina in Bangladesh, opposition parties, particularly extremist group Hefazat-e-Islam has been causing unrest on one pretext or another. They had caused unrest during the golden jubilee celebrations of Bangladesh opposing the installation of the statues of Shaikh Mujibur Rahman in Dhaka and in different towns terming it unIslamic.

When we see the current protests against the alleged desecration of the Quran at a puja Pandal in Comilla, the motive and the conspiracy becomes clear.

The extremist organizations opposed to Shaikh Hasina government constantly look for any issue or opportunity to launch violent protests against the government. Since they did not find an issue, they created an issue by sending someone with a copy of the Quran and got it placed at a puja Pandal. And then they started violent protests against the government and making attacks on temples of Hindus and on their shops and houses.

This disclosure leaves Abbas SIddiqui black faced as he had made a communal statement against non-Muslims. According to Iqbal’s mother Amena, Iqbal Hossain who is in his thirties is a mentally deranged man and a drug addict and has been suffering from psychological problems for the last ten years due to some injury.  According to the police, before entering into the Pandal in Comilla, he had attempted to enter another puja Pandal.

It should be remembered that Abbas Siddiquee had formed the Indian Secular Front with the Congress and the Left before the Assembly elections. The alliance failed miserably and Abbas Siddiqui’s dream of becoming the Owaisi of West Bengal dashed too. Therefore, he was waiting for an opportune moment and an issue to raise a storm and assume centre stage of politics.

Unfortunately, he got one in the alleged desecration of the Quran at a Puja Pandal of Bangladesh. He swung into action and threatened to slit the throat of anyone who desecrated the Quran. It should be noted that the Bangladesh government has taken stern action against those attacking Hindu temples or vandalizing Puja Pandals in Bangladesh. Sheikh Hasina government also suspended workers of her own political party for being involved in the attacks.

Moderate clerics of Bangladesh like Abul Kalam Azad Bashar condemned the attacks on minority places of worship including the temple of Ram Krishna Mission. Maulana Abul Kalam Azad Bashar quoted the verse of the Quran “Wa La "Taziru Waziratun Wizra Ukhra" (That no bearer of burdens will bear the burden of another). The Quran says that no person should be punished for the wrongs of others. He said that those who committed the mistake should be prosecuted by the law and punished but the violence by unruly mobs against the minorities was unIslamic.

Mushraf Bin Murtaza who is the former captain of Bangladesh cricket team and the Member of Parliament from the Awami League expressed his anguish at the attacks on minorities on twitter. He wrote, “I witnessed two defeats yesterday. One was that of the Bangladesh cricket team, which pained me, while the other was the defeat of the entire nation that crushed my heart.”

But on the other hand, Abbas Siddiquee, who is a self-proclaimed Sufi associated with a Sufi saint’s Dargah at Furfura Shareef in the state of West Bengal of India made a statement that was dangerous and threatened the communal harmony of the state. Obviously, he tried to create communal tension in the state by instigating the Muslim youth to resort to violence against non-Muslims.

Abbas Siddiquee is the nephew of Towha Siddiquee who is a TMC leader and it seems that he is nurturing the ambitions of becoming a political leader of the Muslims in the state. Abbas seems to be toeing the the policy of Asaduddin Owaisi who  banks on polarization politics or Hindu-Muslim divide risking severe damage to the fabric of communal harmony of the country.

It is an irony that a self-proclaimed Sufi issues aggressive statements like this without waiting for the truth to come out.

Sufis are known for their tolerant, all embracing and forgiving attitude towards all the sections of the society.  But Abbas Siddiquee speaks about killing non-Muslims for the desecration of the Quran though the same Quran for which he vows to die and kill does not prescribe any punishment for insulting Allah, the angels and prophets of God.

The Quran advises Muslims to observe restraint in the face of insults and blasphemy and leave the matter to God to be decided on the Day of Judgment. Abbas Siddiqui’s statements are against the injunctions of the Quran and the spirit of Islam. It seems that Mr Siddiquee is not fully aware of the injunctions of the Quran on social and communal issues. He is trying to exploit his position as a Pirzada to create an image of the leader of the Muslims. Since he knows that with the image of a religious man, he cannot win the confidence of the larger society, he has decided to project himself as the messiah of the Muslim masses and on the lines of the politics of Asaduddin Owaisi, he wants to become the leader of the Muslims at the cost of Hindu-Muslim harmony in the state.

By issuing communal statements, Abbas Siddiquee is only playing at the hands of communal elements in the country and strengthening their hands. Now that the actual perpetrator who is a Muslim has been arrested, the extremist Muslim organizations of Bangladesh need to be held accountable for their actions. The Quran says that when someone brings a news to you, verify it's truth so that you are not misled and land in trouble. The religious organizations and individuals ignored this Quranic injunction too while perpetrating violence against innocent Hindus that have lived in peace and have fought for the independence of Bangladesh along with Muslims and have contributed to the progress and development of their motherland.