Targeting Hindus in Bangladesh Must Stop

Puja Pandals Have Been Attacked With Odious Regularity In Bangladesh; Putting A Question Mark On The Secular Credentials Of The Republic

1.    The attack on the Hindu minority is not a one-off; rather it has been occurring regularly.

2.    The scale and pattern of the attacks make it clear that it was not spontaneous; the Jamaat e Islami and its students’ wing are suspected to be behind this planned attack.

3.    The media is not helping by not naming the Islamist forces behind the attack.

4.    The saving grace has been the civil society in Bangladesh who still nurture the foundational dream of secularism and pluralism.

During the closing days of Durga Puja, Pandals and temples in various towns were attacked in Bangladesh. The most severe of these attacks took place in the town of Cumilla but violence, arson and death were reported from many other towns having Hindu population. The country has nearly 9 per cent Hindu population which has been in decline since many years. This is not the first time that the beleaguered minority has come under attack; such attacks on their lives, properties and symbols have been taking place with odious regularity.

It is a matter of great relief that prime minister Sheikh Hasina issued a stern warning to the perpetrators of violence stating in no uncertain terms that they will be hunted down’ and punished. However, in the same statement, she also expected that ‘nothing happens in India which could influence any situation in Bangladesh affecting our Hindu community here.’ The import of this latter assertion is unclear to say the least. Was she hinting that as long as Muslims are safe in India, Hindus will be safe in Bangladesh? Isn’t this the same hostage theory that was floated during the partition of the subcontinent by some very communal leaders? As head of an independent republic, she should focus on restoring order in her own country rather than looking for excuses elsewhere.

The Indian government, on the other hand, is right to raise the issue of protection of Hindus in Bangladesh. But then, it is rather rich coming from the very same government that looks the other way when Muslim lives and properties are destroyed in India. Do we still have the moral authority to question what is happening in Bangladesh when mosques get demolished here in India in full public view and no one is held responsible for it?

The reason which was given for the attack in Bangladesh is that the Muslim holy book Quran was allegedly desecrated in one of the Pandals. This simply defies commonsense. Why would a religious minority, which is under attack for some years now, do such a thing? Moreover, the pattern of the attack and the fact that it spread in such a short time, all point towards an organized attempt to foment trouble and target the minority population. The attacks do not seem to be the result of spontaneous reaction; rather it has all the hallmarks of a pre-mediated coercive action.

The involvement of Jamat e Islami, particularly its student wing the Islami ChhatraShibir, seems to be more than plausible. The Islamist group has an axe to grind with the government. Sheikh Hasina has put them on notice ever since she came to power, and the courts have handed down death sentences to many of the important Jamatis for their murderous and pro-Pakistan involvement in the Bangladesh liberation war. As such, this party, having political ambitions, would try their best to destabilize the country to bring a bad name to the government. 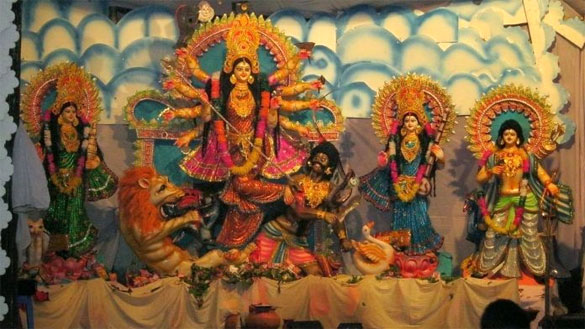 But the attack raises a larger question of the change in religious mood of Bangladesh. The newest member of South Asian countries, the country was founded on secular principles by Mujibur Rahman. And yet, we see a marked shift in terms of performance religiosity and demands to make Islam the state religion from many quarters. In the wake of this transition, religious groups have gained upper hand by forcing their agenda on the government. The Hasina government has resisted some of these moves but she has also given in to other demands. For example, she gave in to the demands of removing the ‘statue of justice’ as well as looked the other way when secular and atheist bloggers were being regularly assassinated by the Islamist right-wing. It is this dithering that has emboldened some of these groups who now have the temerity to openly vandalized empowerment and idols of minority community. The government cannot absolve itself of its complicity.

The media did a commendable job in highlighting these attacks. But curiously enough, it refused to name the perpetrators of the violence. The headlines used ‘goons’, ‘vandals’, ‘miscreants’, etc. to describe those who indulged in the arson. By not saying unambiguously that this was the handiwork of the Muslim right, it is not helping the cause; rather only obfuscating the problem. The evil needs to be named and only then can we find a solution to tackle it. Most Muslims, including the liberal ones, are rather coy in admitting that such violence is justified in the name of Islam. By not calling out such pernicious readings of Islam, they are not attacking the root cause of the problem, allowing it to fester and infect the whole society.

It is heartening to note that the civil society of Bangladesh, particularly its youth have roundly condemned the targeted attacks on Puja Pandals and temples. Many student bodies remained vigilant against any such attacks in their areas by being on guard in and around such spaces. Members of civil society even took out a march to condemn the attacks and soundly denounced some Muslim groups accused of fomenting trouble. It is such acts of empathy that assure us that the founding vision of Bangladesh is still alive in the country; that there are enough voices within the Muslim majority who want a secular and plural Bangladesh. Sadly, the same cannot be said about the majorities of India and Pakistan, who have singularly failed to counter such attacks from the religious right in their respective countries.