In Pakistan, Minority Women Are Kidnapped and Forced To Convert To Islam before Being Married

Growing Crimes against Minorities In Pakistan In Recent Years 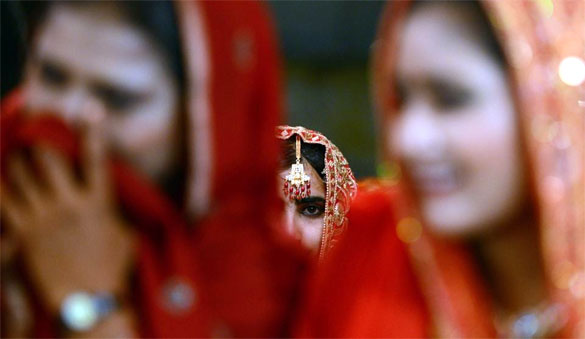 Thousands of girls from minority ethnic groups such as Hindus and Christians are abducted in Pakistan and forced to convert to Islam and marry, according to a Pakistani report. Every year, this is done. Local media reported that the figures were an estimate based on thorough investigations, but not accurate because the exact number was never revealed, citing an inquiry by the British-led All-Party Parliamentary Group (APPG).

The report, which was released in September 2021, focuses on cases of Christian and Hindu girls aged 12 to 25, with religious minorities including Hindus (1.59%) and Christians (1.60%) accounting for 220 million population of Pakistan. Among them, Buddhism, Sikhs, and Kalash are also surveyed with the help of their representative bodies, field survey, and persons appearing before the research institute.

Also Read:   Abduction, Rape, Forced Conversion Of Minor Girls Of Minority Communities In Pakistan Are Defended By Not Only Religious Bigots But Also By Prime Minister Of Pakistan Imran Khan, The Self-Proclaimed Champion Of Minorities Of India

According to local media, the APPG report urges the National Database and Registration Authority (NADRA) of the Pakistani government to produce data utilised by police and courts to determine the age of juveniles, and that they should not be subjected to inconclusive medical tests. According to the report, a substantial percentage of instances include poor and generally illiterate lower-class women who are frequently mistreated and discriminated against, and who are mostly involved in domestic or low-wage work. Exploitation, violence, bullying, coercion, and false promises have all been perpetrated against them.

Crimes against minorities have been progressively growing in Pakistan in recent years, according to the report. The number of forced conversions has increased since the birth of Pakistan in 1947. Women’s predicament in Pakistan is worsening, as a recent report states that 6,754 women have been abducted in the Punjab province of the country. In the first half of 2021, 1,890 people were raped in the province, 3,721 were tortured, and 752 children were harmed. Transparency International Pakistan (TIP) expressed alarm on August 30 about the escalating attacks against women.

Also Read:  Forced Conversion is Unethical and Against the Will of Allah

In Islamabad, there were around 34 official rape incidences and 27 media reports of rape. Officially, 3,721 acts of violence were reported in Punjab, however, only 938 events were covered in the media.

What is the legal position on forced conversion?

The Sindh Assembly enacted the Minority Bill 2016 four years ago, under which the accused can be imprisoned to 3 to 5 years in prison if he forcefully converts or supports the forced conversion. In addition, the bill agreed to create special courts for such instances. Minors’ claims that they have changed their religion cannot be accepted, according to the bill. The decision to change religion will be taken by the children’s parents or guardians.

Also Read:  What Is Iman And How Can A Person Be A Momin, Believer Or Muslim? No Way To Forced Conversion

According to the bill, if the accused is found guilty of forcibly converting to another faith, he would be sentenced to five years in prison and a fine will be paid to the party who was harmed. A fine and up to three years in prison could be imposed on the facilitator. The organisers, clerics, and other facilitators of forced marriages will be treated as supporting actors in this crime.