Foot-In-The-Mouth Imran Khan: 'Uyghur Persecution Is Propaganda of the Western Media and Communist Model of Government Is Unique'

1. Imran Khan says Uyghur persecution by China is only a propaganda of the Western media

2. Imran Khan says that Communist Party of China has beaten western democracies in terms of merit

3. He says China's one party system is better than parliamentary democracy 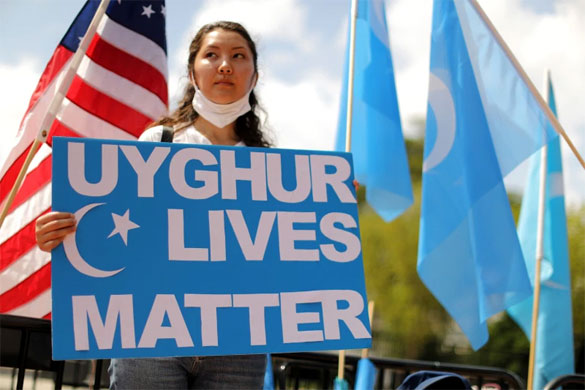 Supporters and members of the East Turkistan National Awakening Movement rally outside the White House to urge the United States to end trade deals with China and take action to stop the oppression of the Uyghur and other Turkic peoples on Aug, 14, 2020 in Washington, DC. (Chip Somodevilla/Getty Images)

This happens when a full-time cricketer becomes the puppet Prime minister of a country with the help of the military. Cricketer Imran Khan became Pakistan's Prime Minister in 2018 with the backing of the Pakistani army that wanted a novice as the prime minister who could play, rather dance to their tunes. As he has come from non-political background, most of the times, he sounds confused when he opens his mouth to say something on issues of national, international and social issues. The result is that on most of the occasions he puts his foot into his mouth.

He did not stop at that. He crossed all the limits of sycophancy when he said that the model of government presented by the Communist Party of China was unique and that one party system controlled by the Communist Party of China was better than the parliamentary democracy of the western countries. He further said that what China achieved through one party rule in terms of social development was not achieved through the parliamentary democracy by the western countries. 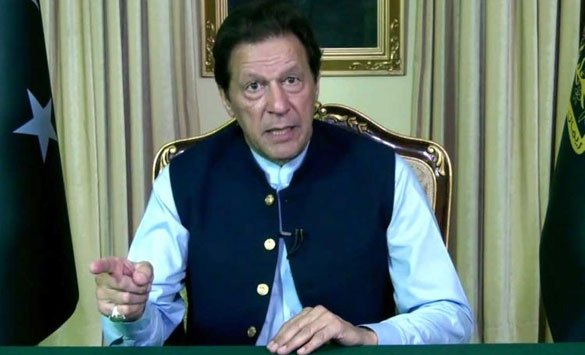 It is not the first time that he has put his foot into his mouth on the Uyghur issue. In 2019, he told Al Jazeera that he did not have any knowledge of the Uyghur persecution. In June this year, he had defended China on Uyghur persecution while talking to CNBC. It is surprising that this champion of Kashmiri cause turns a blind eye to the inhuman and pathetic condition of 1 million hapless Uyghur Muslims only because it has economic and defence relations with China. By rubbishing the Uyghur persecution, he not only did injustice to the Uyghurs but also betrayed more than 50 non-Muslim member countries of the UN who have been protesting against the Chinese persecution of Uyghur Muslims.

More interestingly, he has praised the Communist model of government where one party controls the state and there is no democracy in China though in Pakistan he vows to work towards the establishment of Madina model of government which promises to protect democratic values and human rights of minorities.

In April, Oxford educated West basher Imran Khan had angered feminists and human rights activists by saying that the rise in the incidents of rape in Pakistan was linked to vulgar dress of women. He had said that men could not control themselves on seeing women immodestly dressed thus putting all the blame of rape on the victims themselves. To his remark, Taslima Nasrin had quipped, "I know Imran being aroused on seeing even Burqa-clad women." It should be noted that in Pakistan, recently a 7 year-old girl Zainab was raped and killed. Girls even younger than Zainab are raped by sex monsters in Pakistan. How could then Mr Khan prove his hypothesis. The human rights activists rightly said that Imran Khan did not have a correct understanding of the problem. Actually, he does not have a correct understanding of Islam in the first place though he claims to be champion of the cause of Muslims otherwise he would not have praised and defended dictatorial and oppressive rule of the Communist Party of China vis a vis Madina model. If Imran Khan goes at this speed in praising the Communist model of China, he may one day propose a Communist government in Pakistan.