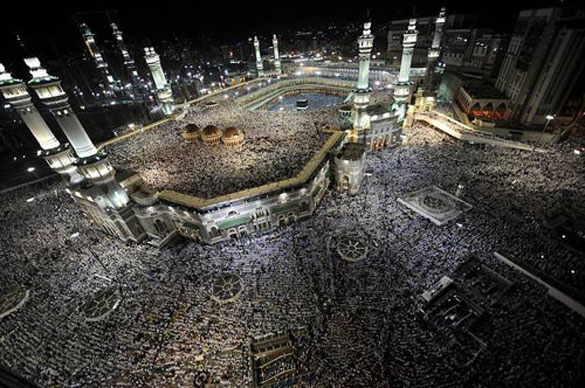 Muslims are often criticised for not speaking out more vocally on key issues that affect their community. Barely a week goes by without the media asking why community leaders aren’t more vocal in condemning button topics such as terrorism or violence against women.

It’s a difficult balance and often the criticisms are unfair. One the one hand ordinary Muslims cannot be expected to answer for everything that is done in their name. But at the same time silence and reticence from a majority simply allows the vocal minority to have disproportionate influence on how Islam is both practiced and perceived by the rest of the world.

One area that you might think would see Muslims speaking out with one voice is the wholesale archaeological and historical destruction of Islam’s birthplace. Over the past twenty years, fuelled by their petro-dollars and intolerant Wahabi backers, the Saudi authorities have embarked on cultural vandalism of breath-taking proportions.

Mecca and Medina, the two holiest cities in Islam, are being systematically bulldozed to make way for gleaming sky scrapers, luxury hotels and shopping malls. The Saudis insist that the expansion of these two cities is vital to make way for the growing numbers of pilgrims in a rapidly expanded and inter-connected world. And they’re right.

But does it really need to be done in a way where luxury apartments and $500-a-night rooms now overlook the Kaabah in Mecca, the one place on earth that all Muslims are supposed to be equal?

Most appallingly dozens of early Islamic sites – including those with a direct link to the Prophet himself – have been wiped off the map. The situation is so bad that the Washington based Gulf Institute estimates that 95 percent of the millennium old buildings in the two cities have been destroyed in the past twenty years.

Much of this cultural vandalism is inspired by Wahabism – the austere interpretation of Islam that is the Saudi kingdom’s official religion. Wahabis are obsessed with idol worship and believe visiting graves, shrines or historical sites that are associated with the Prophet encourages shirq (the worship of false gods). The rampant commercialism meanwhile is inspired by something much simpler – greed.

Muslim silence on this issue isn’t just cowardly, it’s deeply hypocritical. When an obscure group of foam-at-the-mouth Islamophobes got together in the United States to make an utterly pointless and deliberately provocative film about the Prophet Mohammad, or when a group of Danish cartoonists exercised their democratic right to lampoon a religious leader and the creeping self-censorship of the European press, protests broke out around the world.

At Friday prayers, imams and sheikhs wasted little time in giving rousing speeches about how Islam was being sullied and the Prophet insulted. The mobs came out; people died (mostly Muslims).

How many of those imams have bothered to get animated about what has happened in Mecca and Medina? How many are outraged that the house of Muhammad’s first wife Khadijah was pulled down and replaced with a block of public toilets, or that five of the seven mosques marking the Battle of the Trench outside Medina have been destroyed, or that religious police cheered when a mosque linked to the Prophet’s grandson was dynamited? It’s politically a lot more convenient to blame infidels for disrespecting your religion’s founder than it is to point the finger of blame at your own kind.

But it’s not just the Muslim world that has kept mum. When the Taliban – fuelled by same anti-idol zealotry that burns within Wahabis – blew up the Bamiyan Buddhas the world was incensed. Governments spoke out, academics were outraged and column inches filled up. With a few notable exceptions the destruction of Mecca and Medina has largely passed unchallenged.

Partly that’s down to the enormous influence Saudi Arabia wields. As the gate keeper to the cradle of Islam (since 1986 the Saudi monarchy has modestly awarded itself the title Custodian of the Two Holy Mosques), it controls who gets to go on the annual Hajj and Umrah pilgrimages. Muslim countries are terrified that any overly critical statements about what is happening in the Hejaz might lead to a reduction in pilgrim quotas.

Although the Muslim media has been pretty shamefully silent, credit should go to Al Jazeera who did manage to get in and film a documentary last year about the archaeological destruction of Mecca.

Equally, in the West, archaeologists and historians – who should be on the front lines of a no-cultural-destruction-of-Islam protest – keep quiet because they won’t be allowed in to the Kingdom again if they speak up, whilst governments prefer to keep the Saudis onside because of their enormous oil wealth and supposed commitment to the so-called war on terror.

Inside Saudi Arabia itself there is a mixture of opinions. The wealthy elite think little beyond the gleaming shopping malls and hotels that keep them supplied with fat profits and luxury goods.

But there is anger among many locals in Mecca and Medina who have looked on with horror at what has happened to their cities, especially among those who have been forcibly evicted from their homes to make way for this brave new world.

The difficulty, of course, is that in a highly autocratic country where women still don’t have the right to drive and opposition to the Saud monarchy is ruthlessly suppressed, there are bigger fish to fry. Archaeology and history come second to basic personal freedoms.

But hope is not lost because people do care. When I first started investigating this subject a little over a year ago I wasn’t sure how Muslims would react. Last September we published a piece in which I described how Mecca was turning into a gaudy Las Vegas. Within hours it had gone viral. All across the Muslim world news sites, bloggers and readers were reposting the article. It stayed at the top of our most read list for weeks whilst on Facebook alone it has been reposted 37,000 times. And the response we got was overwhelmingly positive.

Muslims were horrified by what was happening and they wanted to know what they could do. A few months later I was asked to give a talk on my research by the City Circle, a group of mainly young, professional Muslims who meet on a weekly basis. The crowd was as mixed as any London Islamic audience – Salafis in their three quarter length trousers and long beards, hippy looking Sufis, women in headscarves and veils, women without headscarves and beardless men in their pin-striped city suits. I expected the more orthodox members to defend what was happening in Saudi Arabia; instead everyone seemed to be equally upset.

After the talk I remember one young Saudi woman in a black Abaya coming up to me with tears in her eyes. “They are literally destroying the birthplace of Islam,” she said. “This is the place where the Prophet lived and prayed. We have to do something."

Only Muslims will be able to save what little is left of the early Islamic heritage within Mecca and Medina. But I hope for both their own benefit - and the wider world’s – that they are successful.