By Mohammad Wajihuddin, The Times of India, Mumbai 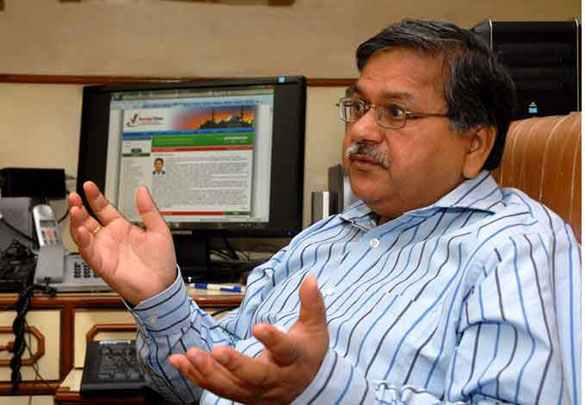 In a tiny room in East Delhi’s Patparganj, a man spends most of his waking hours at his computer. This passion may be something he shares with millions, but Sultan Shahin is no ordinary web addict. Behind his constant surfing, writing and posting pieces on his website called newageislam.com is a steadfast purpose: to reclaim Islam from the clutches of jihadists and petrodollar-funded Salafist-Wahhabis.

Shahin, who ideologically fights the religious right — the tyrannical Taliban and its sympathisers as well as the many Islamic supremacists who claim that Islam alone is Allah’s chosen path to paradise — is a spirited web warrior. “My fight is against petrodollar Islam,” he declares. “I am creating a forum that will lead us to the understanding of a pluralistic, inclusive, tolerant Islam.” And Islam, he adds, is not a new religion. “The Quran says this. It is a reiteration and revalidation of earlier religions,” he avers, seated at his study stacked with scholarly tomes, including several copies of the commentaries on the Quran.

Anathema as this may be to fundamentalists, it’s won Shahin many followers. In the mere two years since the inception of newageislam.com, the website has 117,000 registered subscribers (subscription is free), claims its 60-year-old editor. Its daily newsletter, brought out by a skeletal staff of five, has carried debates on issues and personalities seldom talked about among mosque-going, visibly pious Muslims. So the Mumbai-based Muslim televangelist Dr Zakir Naik is slammed, not because he is allegedly funded by the petro-rich Saudi Sheikhs, but because he tries to establish the supremacy of Islam over all other religions. Niyaz Fatehpuri, a 20th-century Indian scholar and editor of Urdu periodical Nigaar, has become a much admired man on the website because of his rational, ingenious interpretation of Islamic principles. The website even follows the Urdu press, including Urdu dailies in Pakistan, and uploads the rational views in it, both in their original Urdu and English translations.

The feedback, says Shahin, has been astounding. “When I launched it, I didn’t realise it would generate so much interest, especially in young Muslims, from Australia to Abu Dhabi and Canada to Coimbatore,” explains the journalist who, ironically, began his career way back in the 1970s at the conservative Jamaat-e-Islami’s mouthpiece weekly Radiance, then based in the by-lanes of Ballimaran in Old Delhi.

Son of a maulvi, Shahin grew up in a village in the backwaters of Aurangabad in Bihar, and remembers the many nights, he, along with his five siblings, went to bed hungry as his father fell ill and later died, leaving the responsibility of supporting the family on Shahin’s young shoulders. While studying in a college in Patna, he worked part-time for a couple of local Urdu dailies. Shahin later landed up in London as editor of Asia Times, a weekly owned by one Arif Ali of Indian origin. A decade or so in England, he says, gave him great experience “as it exposed me to different strains of Islam and Muslims”. Like, once at a friend’s house in Nottingham, he heard a 20-year-old Muslim extolling the virtues of Ahle Hadees, a sect which propagates puritanical Islam. Shahin asked the boy the treatment he would prescribe for those Muslims who didn’t follow the Ahle Hadees sect. “Kill them,” said the young fanatic in a cold-blooded tone. “It really disturbed me. The boy had apparently been influenced by radical organisations like Al Mujahidun and Hizb-ut-Tehrir. Thousands of young Muslims had been brainwashed by incendiary preacher Omar Bakri who commanded the following that saints do,” recalls Shahin. “I knew it would not take long before the fires of fanatic Islam reached the Indian subcontinent and consumed our youth.”

Shahin personally encountered the ugly face of exclusivist, supremacist Wahhabism in India when he left the London job to edit a magazine in Delhi in the 1990s, backed by a group of influential, educated, “enlightened” Muslims. A few months into his new job, over breakfast one morning, a member of the management asked him a strange question: “You have been married to a Hindu (Pragya) for a decade. Why have you not been able to bring her under the fold of Islam?” “I quoted him the Quranic verse La ikraha fiddeen (there is no compulsion in religion) and reasoned that to convert or not to Islam was her personal choice. But it didn’t cut any ice and they sacked me,” Shahin says.

He went into deep depression, as the blow had been dealt by the people whom he believed to be “the cream of Indian Muslim society”. He took to freelancing aggressively in the national press, opposing the conservative mindset, a mentality which threatened the multicultural, pluralistic ethos of India and Indian Islam. Many in the Sangh Parivar, including the BJP, mistook him for the right medium to reach out to Muslims. “They didn’t know that many Muslims hated me. I was a bad choice to become a bridge between the Sangh Parivar and Muslims,” laughs Shahin, who has been variously addressed as kafir (infidel), munafiq (hypocrite) and even Dear Zionist.

His liberal, rational advocacy of Islamic principles, especially since he launched the website, has enraged many Islamists, who hack his website regularly and post abusive letters and rejoinders. Many threaten him with the fires of hell. “Initially, I left the site unmonitored, as I wanted a free and frank dialogue. But now we monitor it, as we discovered that not just the jihadists, but even some Viagra-selling companies were using the website to advertise their products,” he smiles. “We sell ideas, not aphrodisiacs.”

A father of four, Shahin’s deep study of religions, especially Islam, has made him conclude that like Adam, Moses and Mohammad, Ram and Krishna were also prophets. “If we address Mohammad as Hazrat Mohammad, I have no reservations about addressing Ram as Hazrat Ram,” he explains.

As we leave this champion of rational, inclusive Islam, we marvel at India’s generous secularism. Which Islamic country would have tolerated a Shahin? Ask Salman Rushdie or Taslima Nasreen.