Time to Leave Miserliness, a Corruption of the Soul – Denounced by Allah and His Apostle. Be Gracious and Generous to Save Humanity from Hunger and Disease

1.    Miserliness is an evil trait that corrupts the soul of the concerned human being.

2.    All those who are blessed and can afford to play a Messiah must play the spiritual role of graciousness leaving aside all kinds of excuses.

3.    Wealth accumulated through miserliness is not worth it as it does not serve the purpose one desires.

4.    Our graciousness will be rewarded handsomely hereafter that is our permanent abode. 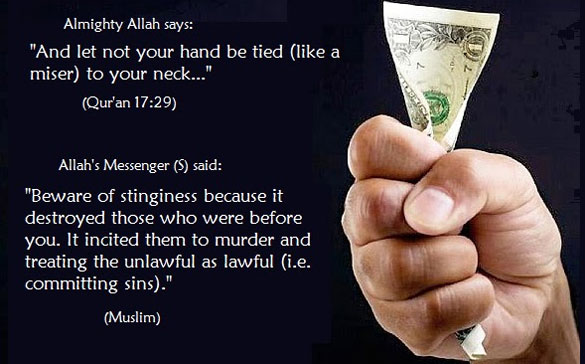 Miserliness is an evil trait that corrupts the soul of the miser. A miser is a person who loves his wealth more than even himself. Miserliness is an illness that takes into grip the wellbeing of his or her family but it affects the people around him. By birth, all human beings are gracious and kind but the worldly trait of miserliness corrupts the soul of the person. A miser ceases to think properly and desists from all the good work that pleases Allah the Creator and His Apostle Prophet Muhammad Pbuh.

Allah says in the Holy Quran:

Those who are miserly with what God has granted them out of His grace should not think that it is good for them; on the contrary, it is bad for them. Whatever they meanly withhold will be hung around their necks on the Day of Resurrection.... (Ali 'Imran - 180) — Abdul Haleem

Miserliness destroys the life in here and hereafter. Allah the Most Gracious has described miserliness in His revelations on various occasions, commanding the believers to be gracious with His creation. Allah, the All-Knower says in the Holy Quran:

Those who hoard up treasures of gold and silver and spend them not in the way of Allah; give them the news of a painful punishment, on the Day when that (wealth) will be heated in the Fire of Hell and with it will be branded their forehead, their sides, and their backs, (and it will be said to them:) ‘This is the treasure which you hoarded for yourselves. Now taste of what you used to hoard. See for yourselves what they feel like’ (At-Tawbah: 34-35)

There are certain unsocial traits of the personality that human being develops due to various evils spread in the society and miserliness is one of them. There is no one to be blamed for that. Allah the All-Knower and His messenger, Prophet Muhammad Pbuh denounce the mental trait of miserliness the most as such people become a slave to their worldly gains and in the process get lost in the darkness of their irresponsible behaviour towards their family, friends and the society. People with the habit of miserliness get aloof from their families and society and they do not even acknowledge it. The worst thing is that a miser does not achieve anything in life here or for the life hereafter as one of the Prophetic traditions mentioned below says:

"The first of this Ummah was reformed with abstinence and certainty of belief, and the last of this Ummah will be destroyed by miserliness and longing." Narrated by Ahmad and Tabarani in AI Awsat and AI Baihaqi.

Zakat, Fitrah and charity have the greatest approval of Allah the Almighty Creator and His Messenger Prophet Muhammad Pbuh. Allah bestows His forgiveness and blessings on those who care for the poor, needy and helpless people. Allah the Most Gracious says in the Holy Quran:

[Charity is] for the poor who have been restricted for the cause of Allah, unable to move about in the land. An ignorant [person] would think them self-sufficient because of their restraint, but you will know them by their [characteristic] sign. They do not ask people persistently [or at all]. And whatever you spend of good - indeed, Allah is Knowing of it.  -  (Surat Al-Baqarah [2:273)

Have you seen the one who denies the ˹final˺ Judgment? That is the one who repulses the orphan and does not encourage the feeding of the poor. (Al-Ma'un - 1-3)- Dr Mustafa Khattab

The revelations of the Holy Quran and Prophetic traditions, given below are to introduce us to our inborn Islamic essence of kindness, inclusiveness and brotherhood which generates ‘graciousness’ that Allah loves the most.

Quranic Verses on Miserliness and the Misers' Fate

Surely, those who disbelieve, their wealth and their children shall not suffice them in the least against Allah. Those are the fuel of the Fire - (Ali 'Imran - 10) Mufti Taqi Usmani

... and for consuming the people's money illicitly. We have prepared for the disbelievers among them painful retribution. (An-Nisa - 161)

O you who believe, many of the rabbis and the monks do eat up the wealth of the people by false means and prevent (them) from the way of Allah. As for those who accumulate gold and silver and do not spend it in the way of Allah, give them the ‘good news of a painful punishment, — (At-Tawbah - 34) Mufti Taqi Usmani

Prophetic Traditions on Miserliness and the Destiny of Misers

"He who sleeps on a full stomach whilst his neighbour goes hungry is not one of us." (Prophet Muhammad)

"How wonderful is the case of a Believer! There is good for him in whatever happens to him -and none, apart from him, enjoys this blessing. If he receives some bounty, he is grateful to Allah and this bounty brings good to him. And if some adversity befalls him, he is patient, and this affliction, too, brings good to him" (Muslim)

“Allah has enjoined upon rich Muslims a due to be taken from their properties corresponding to the needs of the poor among them. The poor will never suffer from starvation or lack of clothes unless the rich neglect their due. If they do, Allah will surely hold them accountable and punish them severely.” (Related by At-Tabarani in Al-‘Aswat and as-Saghir)

Whoever relieves a believer’s distress of the distressful aspects of this world, Allah will rescue him from a difficulty of the difficulties of the Hereafter - Sahih Muslim

“Protect yourself from hell-fire even by giving a piece of date as charity.” (Al-Bukhari and Muslim)

The world needs to adopt graciousness and come forward to help those who require their inclusive essence. Looking at the prevailing situation in the world today, it is an absolute truth that there are millions of people that are homeless, penniless and hungry. They all are at the mercy of God, therefore, humankind being a vicegerent of God needs to come to the rescue of their fellow beings.

This is not a time to play the blame game and escape the need to fulfil our humanitarian responsibilities. All those who are blessed and can afford to play a Messiah must play the spiritual role of graciousness leaving aside all kinds of excuses. World’s graciousness today will wipe out the curse of poverty and it will again be brimming with Allah’s graciousness and kindness towards humankind.

A portion of their money was set aside for the beggar and the needy. - (Adh-Dhariyat - 19)

The example of those who give their money seeking GOD's pleasure, out of sincere conviction, is that of a garden on high fertile soil; when heavy rainfalls, it gives twice as much crop. If heavy rain is not available, a drizzle will suffice. GOD is Seer of everything you do. (Surah Al-Baqarah - 265)

The Quranic Ayat mentioned above are a clear indication that the wealth accumulated through miserliness is not worth it as it does not serve the purpose one desires. On the other hand, our leaving miserliness and being gracious will bless us with God’s forgiveness and the world will be a garden of highly fertile soil.

Being Gracious and Generous

No matter how old or young you are, you can practice being generous to others!

Allah the Most Gracious has born all human beings with the essence of the positivities required to be sympathetic, gracious, inclusive, and an advocate of pluralistic ethos. Therefore, there is nothing to be cultivated in our personae to be sympathetic and kind towards the victims of the war and sectarianism, terrorism and militancy. Our graciousness will be rewarded handsomely hereafter that is our permanent abode. Rise to the occasion and remember what God and His Apostle say:

“Who is he that will lend God a goodly loan, which God will double unto his credit and multiply many times? It is God that gives (you) Want or Plenty, and to Him shall be your return” (Al-Baqarah: 245).

“O you who believe! Shall I lead you to commerce that saves you from a grievous Penalty? You should believe in God and His Apostle and should strive (your utmost) in the cause of God, with your property and your lives. That will be best for you if you but knew” (Surah As-Saf: 10­11)

“Spend (in charity) out of the (wealth) whereof He hath made you heirs" (Al-Hadid: 7)

Charity keeps away from its givers, the heat of the grave, and on the Day of Judgement, the believer will be in the shade of his charity. Holy Prophet (SAW)