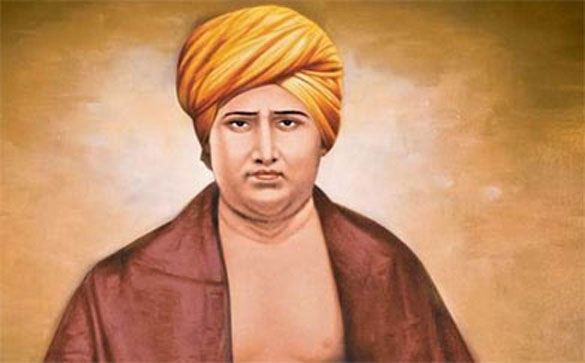 A century after Maharshi Dayananda Saraswati blazed the spiritual landscape of the Indian sub-continent, there are many who don’t have a clue as to why he issued the battle cry: “Back to the Vedas!” The need to urge the people to return to the Vedas arose because they had strayed from its light. Now, perhaps more than then, it is true that those who pass for Hindus — in myriad forms of that religious identity — are ignorant of and alienated from the Vedas. This is ironic since “Veda” means knowledge. You cannot be a Hindu and yet be ignorant and certainly, not ignorant of the Vedas.

Ignorance is the greatest peril for humanity. It is not merely an absence of knowledge. There is a knowledge more dangerous and condemnable than ignorance: The knowledge of what is evil, wrong or untrue. Many there are who have an uncanny genius for the things of darkness. While the spiritually enlightened see — or endeavour to see — everything in the light of truth, the wicked see everything in the darkness of falsehood. They hate the light of truth. The irony is that even the followers of Dayananda fall into this trap. He put all his emphasis on the duty to know, embrace and live by the truth because it was his mission to liberate human beings from superstition. He firmly believed that the Vedas are the most effective antidote to superstition.

Superstitions thwart our ethical development. This is obvious from the operating strategies of our fraud godmen. Do we know a godman who does not claim to perform miracles? Miracles belong to the domain of blind faith. When does someone blindfold you? Isn’t it when he does not want you to know where you are being led? In whose interest is such an arrangement?

All superstitions thrive in darkness. All merchants of superstition hide themselves. Fraud godman Gurmeet Singh needed his Gufa. Every godman creates a world of impenetrable secrecy around himself; lest he is seen as an ordinary human being. Every superstition is a blatant contradiction of truth and the light of spirituality

Superstitions caricature God. If anyone spends a few minutes considering the idea or image of God that superstitions imply, he would be shocked. To think of the Creator and Sustainer of the cosmos in terms of this petty image — especially assuming that God can be bribed to be partial towards you — is laughably atheistic. If we have a modicum of love for God in us, we will realise that we insult God by casting the muck of superstitions at him/her. Superstitions are manufactured and popularised mainly to hold people back from God, which is essential if they are to be manipulated.

The deadliest superstitions are, therefore, those that pertain to God. Whatever misrepresents and insults God can only be harmful to human beings; because God is the source of our life and the destination of our destiny. Any idea of God as partisan to a person, group or country is superstitious. The second deadliest superstitions aim at fragmenting the human family and sowing seeds of hate and cruelty. We have to be particularly stupid, Maharshi Dayananda would say, to believe that we can serve or honour God by hating and hurting our fellow human beings. Maharshi was open to people of all kinds. He used to hold spiritual disputations with scholars of all religions, including Christian missionaries. Of course, this was resented by the merchants of religious obscurantism. But he pursued his spiritual mission undeterred by opposition and calumny.

The third most unfortunate set of superstitions comprise those that seek to subjugate the gullible to the wiles of a priestly class. The idea that you can wash away your sins by taking a dip in a river and then return to your old ways until the season for the next dip comes insults God but profits priests. Superstitions of this kind help to degrade religion into an industry.

To all Indian citizens — irrespective of our different religious traditions — the worry is that superstitions inhibit the rise and spread of scientific temper, which is not only a constitutional imperative but also a spiritual need. The Vedas are scientific, though not in the sense that some feats of modern science are symbolically prefigured in them. They are scientific in the sense that they see the spread of knowledge, of light, as the means for human ennoblement and Moksha.

The hope for India does not lie in securing American endorsement. Or in massive digitalisation. Or by attaining “super-power” status. The destiny of India can be fulfilled only if we return to the light of the Vedas. And that light is not the exclusive property of the Hindus, just as the light of the sun is not the exclusive inheritance of any group or tribe. You cannot claim to believe in the Vedas and go about your religiosity like wild beasts.

Swami Agnivesh is a Vedic scholar and activist