1.    There are continuous suggestions from several Indian commentators to engage and dialogue with the Afghan Taliban after their resurgence in their traditional strongholds.

2.    Dialogue with terrorist ideologues may not be a bad idea but such an outreach should be backed by an assessment on the new dynamics and ground realities.

3.    Afghan Taliban remains unchanged and unreformed, as far as its ideological modus operandi is concerned.

4.    It gives an indication that now after an apparently successful jihad by the Afghan Taliban and AQIS against the American forces in Afghanistan, India is the priority theatre for their onslaughts.

5.    Favourable sentiments among a section of Indian Ulema towards the resurgence of Afghan Taliban do not augur well.

There are continuous suggestions from several Indian commentators to give ‘peace overtures’ to the Afghan Taliban after their resurgence in their traditional strongholds. Some of these commentators have even urged New Delhi not to perceive the Taliban as a Pakistan-sponsored terror instrument, and engage and dialogue with it to pursue its own interests. According to media reports on June 9, some Indian officials in Doha tried to outreach Taliban factions that are perceived as being “nationalist” or outside the sphere of influence of Pakistan. Peace talks or dialogue even with terrorist ideologues is sometimes sought after. But such an outreach should be backed by an assessment on their ground activities, changes and dynamics. Whether the nice pieces of suggestion for India to engage with Afghan Taliban are insightful or untenable can be gauged by the fact that the Taliban remains unchanged and unreformed, as far as its ideological modus operandi is concerned.

Take a look at the recently published jihadist literature of the Afghan Taliban in Urdu and you will stop misreading the situation. Nawa-e-Afghan Jihad—an Urdu magazine of the Afghan Taliban and AQIS which has previously been refuted point by point by New Age Islam scholars— was recently renamed as “Nawa-e-Ghazwa-e-Hind” ostensibly after the U.S.-Taliban deal. Now its focus is, as a line with the name of the magazine reads in Urdu, to call for supremacy of the religion [Deen] in the subcontinent and the world over”. 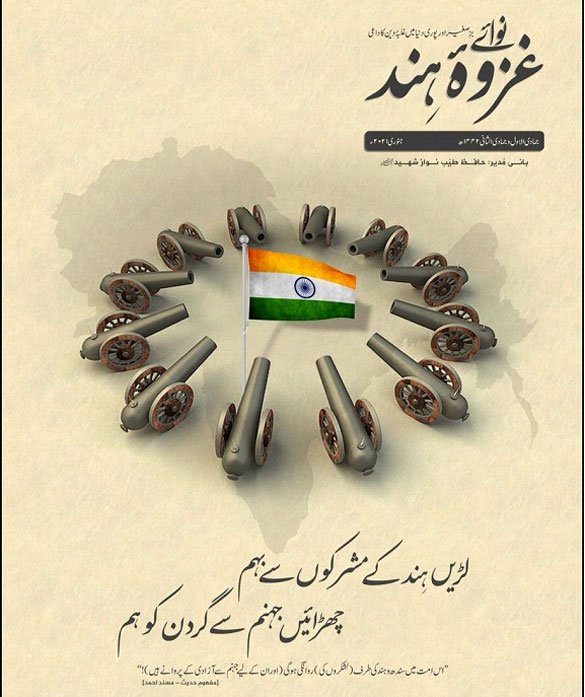 At the very outset, the cover-pages of Nawa-e-Ghazwa-e-Hind’s latest editions (from January to April, 2021) signify the shift in jihadist focus from Af-Pak region to Indian subcontinent, especially the Kashmir region. The January 2021 issue of the magazine which was released with a striking cover give an injunction to fight against the Mushrikin (polytheists) of India, quoting a hadith report from Musnad Ahmad which, in a nutshell, says: “In this [Islamic] Ummah, forces will be sent to Sindh and Hind [who will wage a jihad and thus, in return, will ensure their deliverance from the hellfire”. 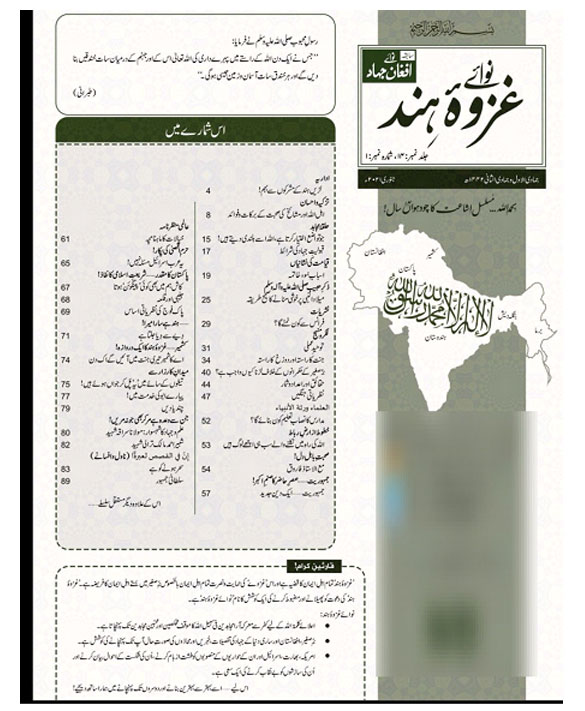 If you go through the content of this issue and read between the lines, it gives an indication that now after an apparently successful jihad by the Afghan Taliban and AQIS against the American forces in Afghanistan, India is the priority theatre for their ideological and operational onslaughts.

Another striking cover-page of the magazine’s recent edition (February to April, 2021) blatantly reads: “From Dhaka to Delhi, and Srinagar to Islamabad; all believers firmly affirm that they will not bow down to anyone except Allah”. It published some provocative articles titled, “Indian influence in the Bangladeshi Army” written by some Muhammad Misbah Bangali, and “Jihad-e-Kashmir” written by Adil Ahmad Lone who used to regularly write in Nawa-e-Afghan Jihad by the pen name, Ikrama Shopiani who was recently killed in an encounter according to the magazine. 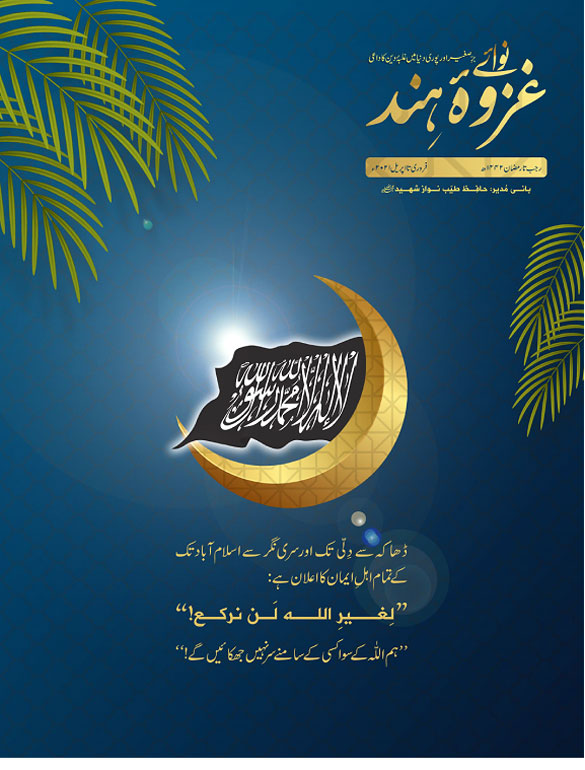 Significantly, the Nawa-e-Ghazwa-e-Hind frequently quotes the writings and letters of Syed Ahmad Shaheed—the 18th century pan-Islamist ideologue from Raebareli known for his jihad movement, Tahrik-e-Balakot. Syed Ahmad Raebarelwi (not to be confused with A’ala Hazrat Ahmad Raza Khan Barelwi) is equally venerated by Ahl-e-Hadith and Deobandis in India and Pakistan. Hagiographical books such as Tarikh-e-Dawat-o-Azeemat (a history of Islamic Da’wah and expeditions in India) which glorify Syed Ahmad as ‘Shaheed’ (martyr) are part of the extra-curricular self-study texts in several leading madrasas like Darul Uloom Nadwa in Lucknow. Syed Ahmed ‘Shaheed’ is projected in Urdu Islamic literature as someone waged his Mujahideen movement in India to fight the British imperialism. “Mauj-e-Kausar”, a textbook on the modern history of Indian Muslims’ religious and intellectual achievements, written by Shaikh Muhammad Ikram and studied in several madrasas and Islamic studies departments of central universities, has precisely done that. But an objective study of the Mujahidin movement and literature of Syed Ahmad ‘Shaheed’ reveals that he worked to establish an Islamic state in the subcontinent and waged a militant jihad against non-Muslims. All in all, he was an exponent of Wahhabi puritanism in India and was the first Islamist ideologue to justify violence against the Sikhs. Along with Syed Ahmed ‘Shaheed’, Shah Waliullah and Shah Ismael Dehlawi have also been invoked in several previous issues of the Nawa-e-Ghazwa-e-Hind such as the July 2020 issue of the magazine which targets Jama Masjid in its coverage in order to draw attention of the readers to the ‘lost glory’ and the past grandeur of Islam and people of Islam—Ahl-e-Islam—in India. It recalls the history of Delhi as the sanctuary of thousands of ulema and Mujahidin such as Shah Abdul Azeez and Shah Ismael. 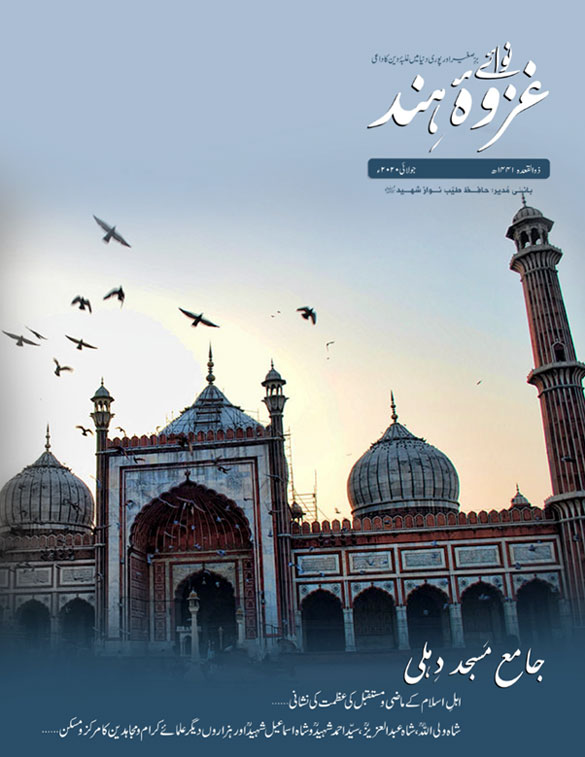 Notably, Shah Ismail of Delhi proved to be the chief proponent of the anti-Shirk movement spearheaded by Muhammad Ibn Abul Wahab from Najd of the Arabian Peninsula. Much in the same way as Abul Wahab Najdi wrote his book “Kitab al-Tawhid”, Maulana Shah Ismail penned the book titled, Taqwiat-ul-Iman (strengthening the Islamic faith). His books promoted the same line of thinking that was laid out in the writings of Ibn Abdul Wahab including Majmu’a Al-Fatawa which declared all non-Wahhabi Muslims as mushrik (polytheists) and thus justified the killing of the then Indian Muslims along with the Hindus. Until today, Afghan Taliban of the Deobandi orientation consider both Shah Ismail Dehlwi and Syed Ahmad Raebarelwi as their theological mentors and sources (marj’a). It’s more ironical that these jihadist ideologues and their writings are still going unchallenged in our Indian madrasas. They have become an inseparable part of the text books under the subject of Aqaid (beliefs) in Deobandi seminaries.

(“We must remember that Islam and polytheism are contradictory to each other. Islam is the great light given by the Lord of mankind, while polytheism is nothing but darkness and ignorance. We cannot sit quietly relying on the white lies of 'Hindu-Muslim brotherhood’ and the deception of 'religious tolerance' [in India]…."We have to accept the fact that polytheistic Hindus can never be benevolent to Muslims. The Book of Allah states that after the Jews, polytheists are the worst enemies of Muslims).

Then the booklet quotes some verses from Qur’an to buttress this point, and reproduces an “advice for Mujahideen around the world and especially in Pakistan and Kashmir” in which Mujhadidin are asked to stick to the principles of Shariah, and not attack mosques and innocent civilians, which it says gives opportunity to Indian and Western media to defame jihad.

In this context, one would recall the Indo-Afghan Ulema’s first Islamic summit which was held in New Delhi’s India Islamic Cultural Centre last in December, 2020 with the efforts of the Afghan Embassy in India. A group of six Afghan Ulema interacted with the Ulema of Deoband and other experts of Islamic Sharia in India. The aim of the conference was to strengthen religious dialogue and cultural ties between the two countries’ Ulema and encourage them to discuss the Islamic doctrines being misused, especially in Afghanistan. Nearly all Islamic scholars from Indian and Afghanistan in this conference declared war in Afghanistan un-Islamic and theologically unjustifiable and forbidden according to the Sharia. But what do the Indian Ulema think about the resurgence of Afghan Taliban now?

Recently a number of Indian Ulema and Imams expressed concerns over the rise of Afghan Taliban on social media. Of course, some of them lamented the Taliban’s violation of Islamic laws particularly regarding women and modern education. But they were also rejected by another set of Ulema, predominantly Deobandis and comparatively larger in number and with more sizeable following than those who decried the Taliban’s terror activities.

An alumnus of Darul Uloom Deoband and senior Urdu journalist, Wadood Sajid Qasmi wrote an article condemning the rocket attack in Kabul during Eid ul-Adha prayers. Though he did not condemn Taliban head-on and merely hinted at an ideological change within the Taliban which he deemed as a threat, a large number of Ulema and Islamist intellectuals in India and in the diaspora rebuffed his note of caution. Wadood Sajid’s piece was criticised by several influential Ulema mostly young graduates from Ahl-e-Hadith and Deobandi schools. For instance—Maulana Yasir Nadeem-ul-Wajidi, alumnus of Darul Uloom Deoband who also runs an online Darul Uloom and is based in Chicago, wrote a rebuttal to Wadood Sajid. Indian Ulema like Wajidi consider Taliban only Talaba (madrasa students), not terrorists or extremists and accuse the Aalims like Wadood Sajid of deviating from the right path. Another young Deobandi cleric, Obaid-Tariq Jamshedpuri writes: “Basically there are two types of Jihad: Intellectual Jihad and Physical Jihad. Ulema are doing Intellectual Jihad and Mujahidin the Physical. Both are doing their own duties”.

Though Sufi and Shia Ulema in the Indian subcontinent have traditionally rebuffed Taliban because of its systematic attacks on their mosques and Sufi shrines, some favourable sentiments among a section of Indian Ulema towards the resurgence of Afghan Taliban—based on the deep sectarian divides among them—do not augur well.

‘Azan: A Call to Jihad - On the Road to Khilafah’: A Comprehensive and Conclusive Refutation by an authoritative Quranic exegete"

What ISIS Really Wants– Point by Point Refutation of Most of the Key Assumptions, Statements, Quotations and Charges Made in Graeme Wood’s Essay