The Jammu Drone Attacks Orchestrated By Lashkar-e-Taiba Call For An Immediate And Long-Term Systemic Response: Countering and Preventing Radicalisation

•        The two terror blasts at the Air Force Station in Jammu has given us some clear warnings of the new wings of terror in Jammu & Kashmir.

•        With surrogates like LeT or Hizbul Mujahidin on Indian soil to stage such cowardly terror strikes, drone attacks provides Pakistan with plausible deniability, reducing the possibility of cross-border reprisal.

•       The Islamic State of Jammu and Kashmir (ISJK) has been systematically propagating the “Lockdown issue" of Voice of Hind. 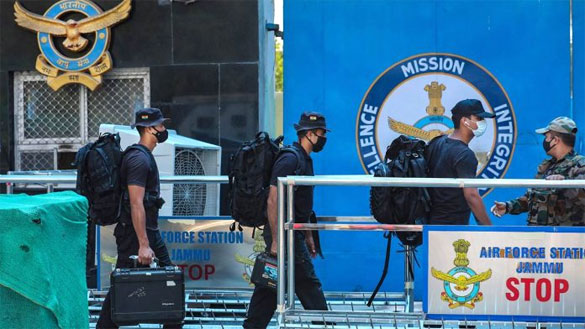 Pakistan-based UN designated terrorist outfit Lashkar-e-Taiba is the prime suspect behind the drone attack on the Air Force base in Jammu on Sunday. J&K police chief Dilbagh Singh has briefed the media that same terror group may also be behind the drones spotted near a military facility on Monday. "The activity at Kaluchak also seems to be from same group," he said, referring to the two drones that were spotted near the Kaluchak military station, which "flew away" after the troops fired at them.

Marking the first-time drones which were used in an unusual terror attack on an Indian military site, the two terror blasts at the Air Force Station in Jammu has given us some clear warnings of the new wings of terror in Jammu & Kashmir. Though the terror attempt on the IAF base at Jammu airport has failed, as it cost no lives or physical damage, it has clearly demonstrated that drone attacks in Jammu & Kashmir may be a very severe menace. It's less significant that the two low-intensity bombs couldn't inflict much damage. What is more worrisome is the fact that there appear to be no quick-fix remedies to this terror innovation.

What is rather more appalling is the young impressionable individual who has been arrested with a 4-kilogramme bomb device provided by the LeT. Nadeem Ul Haq, a 22-year-old suspect from Banihal, was caught soon after the two bombings at the Jammu Air Force Station early Sunday. This again shows how obnoxiously Pakistani terror outfits radicalise and recruit children and the youth in Kashmir to fit perfectly into Pakistan’s strategy of asymmetric warfare. With surrogates like LeT or Hizbul Mujahidin on Indian soil to stage such cowardly terror strikes, drone attacks provides Pakistan with plausible deniability, reducing the possibility of cross-border reprisal.

An unbiased look into the shadowy world of cross-border terrorism in Kashmir emanating from Pakistan by the world’s leading investigative journalists like C. Christine Fair (2018), Amir Ali (2006) and Antonio Giustozzi (2018) highlight the nefarious role of the Pakistani deep state as it attempts to wage proxy warfare through nuclear weapons and now drone strikes.

Distinguished scholar-journalist, C. Christine Fair explains in her book “In Their Own Words: Understanding Lashkar-e-Tayyaba” as to how and why Pakistan uses non-state actors to pursue its state goals through nuclear weapons:

“Pakistan's nuclear deterrent facilitates low-intensity conflict and proxy war in two important ways. First, by cultivating ambiguity as to its employment and deployment doctrine and the red lines that would precipitate Pakistan's use of nuclear weapons, Islamabad (or more accurately Rawalpindi) believes that it can deter any militarized Indian response either to territorial incursions by regular or irregular Pakistani troops or significant strikes against Indian interests by Pakistan-supported and/or -based nuclear weapons, and, increasingly, tactical nuclear weapons, India is simply likely to "tolerate" these nuisances rather than risk a full-scale war." Second, nuclear weapons facilitate Pakistan's ability to wage low-intensity conflict by drawing in international actors who work to limit a conflict once it unfolds.”

Now exercising the right to self-defence, India's immediate goal should be to modernise its military radar systems in order to detect small drones, as well as seek other technologically advanced and costly upgrades that can disrupt drone communications. At a time when a global effort is underway to develop high-tech systems that can anticipate threats from the skies, India's defence research has to move fast and excel in this direction.

There’s another side to this situation which is actually grimmer and more vicious. While the threat of drones has been acknowledged, the use of children and youth from Jammu & Kashmir in proxy warfare continues to create horrors. It shows the greater need to counter-radicalise the new techno-savvy generation in Kashmir, which is more gullible and prone to radical thoughts. Reports tell us that Lashkar-e-Taiba and Jaish-e-Muhammad tried to make foray into children's books and youth publications during the Covid-19 Lockdown. The Islamic State of Jammu and Kashmir (ISJK) has been systematically propagating the “Lockdown issue" of Voice of Hind, an ISIS mouthpiece in the Indian subcontinent which encourages communal violence in India. In its earlier issues, the Voice of Hind has provoked the Muslim youth in the valley to resort to violence and vengeance. "Believers, stand tall, it's time for Kuffar to fall", reads a recent edition of the 'Voice of Hind' which refers to Delhi riots and encourages Muslims in India to turn violent. “Remain equipped with objects like ropes, wires, glass and hammer that can be used to ‘kill the Kafirs’”, the magazine provokes with the cover page featuring some photos of the Delhi riots.

Given this ideological motivation behind such terror strikes, the Jammu drone attack obviously marks the beginning of a whole new phase in the Kashmir Valley's terror cycles. Given that attribution to Pakistan and its surrogate terrorist outfits is nearly impossible, the number of volunteers is only anticipated to increase. At this critical juncture, it would be sagacious to mitigate the home-grown Jihadism and counter-radicalise the youths who fall prey to the terror planners. Some of the action points that need to be actualised at the earliest possible, are as follows:

•        Make the students in Kashmiri schools and universities acquainted with a complete curriculum of peace and pluralism!

•        Warn them against the radical thoughts and views of the modern-day the Kharijites and make them aware of the gradual process of conservatism which leads to extremism, and ultimately to terrorism.

•        Instil the concept of mercy into their hearts and minds and create the right frame of mind to tackle ideological extremism.

•        Equip them with exemplary morals and values from the modern universalism and promote a genuine intra-faith understanding and interfaith harmony.

•        Create an interest among them in studying about the life and teachings of the Kashmir Valley’s saints, Rishis, Sufis and other notable figures in order to idealise them.

•        Eliminate hopelessness which leads to suicidal thoughts and drug addiction among the Kashmiri youth and even women. Create the desire and will among them to serve mankind and reform the Kashmiri society.