The Hashtags Were Intense In Countries Where Muslim Brotherhood Is Active

1.    Since Uyghur Muslims are ignored and Kashmir is mentioned, it seems to be the work of Pakistan.

2.    Arabs have never spoken out against atrocities against Muslims anywhere in the world.

3.    The anti-India hashtags and violence against non-Muslims in Kashmir cannot be a coincidence.

In the last wee k of September, the hashtag #Boycott_Indian_Products trended in the Middle East on twitter. The hashtags were aimed at tarnishing the image of India and the impression was created that in India, the Muslims are being persecuted and killed at a very large scale.

The hashtags appealed to the citizens of the Middle East to boycott Indian products as a retaliatory step and alleged the Prime Minister of India being behind the anti-Muslim campaign in India. The people behind the hashtags also appealed to the Muslims of the world to unite and take steps to protect the Muslims of India. And last not the least, they appealed yo the governments of the Middle East states to expel Indian citizens from their countries,  as they said, India violated human rights in Kashmir.

Also Read:  An Indian Muslim’s Rebuttal to the Twitter Storm #Boycott_India By Some Arab ‘Parodies’ and Pak Propagandists

To spread anti-India feelings among the citizens of the Muslim world, some videos and highly exaggerated reports of atrocities against Muslims are deliberately being circulated daily. It should be noted here in India while some fringe elements are involved in communal and caste based violence against minorities including Muslims, the majority of  Indians are peace loving and condemn such violence.  The hashtags found the videos of police actions against protesting Muslims of the province of Assam to launch a social media campaign against India.

In the Indian state of Kashmir, recently there was a spurt in communal violence against non-Muslims. According to a report published on Awaz-the voice, non-Muslims are being specifically targeted by militant groups in Kashmir. In the last three days, militants killed five non-Muslims in Srinagar including a well-known businessman and a principal of a school. This kind of communal violence in Kashmir is new because Kashmiris have lived peacefully and maintained communal harmony even at the height of terrorism.

It is important, however, to see even this situation, horrendous and dastardly as it is, in the perspective of recent data to get a correct picture. An Indian Express editorial on the subject (Warning in Valley:  October 9, 2021) says: "The fact is that an increasing number of civilians, most of them Kashmiri Muslims, have been targeted by militants since 2019. This year, 28 people had been killed until October 7, last year 37 were killed in the same period, and in 2019, the number was 38. Most of them are Kashmiri Muslims suspected of being “collaborators” of the post-2019 set-up in J&K."

The violence in Kashmir was only mentioned to show that violence against Muslims by the fringe elements among Hindus or violence against non-Muslims by the fringe elements among Muslims has been a cause for concern for the Indian society and it has tried to deal with it tactfully.  All prominent Muslim organizations and prominent Muslims have condemned the violence in Kashmir and have accused Pakistan of orchestrating the violence and pushing militants across border for the purpose. 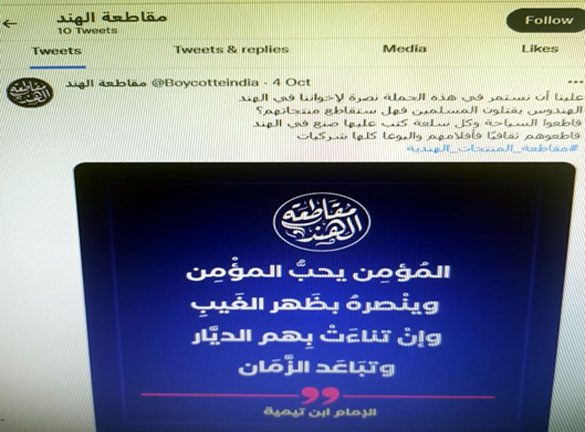 Therefore, the hashtags being trended on twitter in the Middle East seems to be motivated by political agenda of some fundamentalist organizations and a country that wants to put India in an embarrassing situation and have a political edge over it.

However, it was not visible in Saudi Arabia and UAE.

So it can be inferred from the intensity and presence of the Boycott India hashtag that it was very active in countries with the presence of The Muslim Brotherhood.

The violence in Kashmir and the hashtags seem to be well timed. They cannot be a coincidence.

It is also surprising that an appeal for boycott of India products has been made on twitter in the Middle East when it is a fact that Arabs have not shown any concern for the atrocities perpetrated against Muslims anywhere in the world. They have sided with Israel on the issue of Palestinians and they supported China on the issue of the persecutions of the Uyghur Muslims. They did not call for the boycott of Chinese or Israeli products to show solidarity with Palestinians or the Uyghur Muslims. In the UN also majority of the Muslim countries have not raised their voice against the horrendous atrocities against the Uyghur Muslims by the Chinese government.

They have not raised their voice against the genocide of Rohingya Muslims by the Mynamarese military because China backs Myanmar.

They support China on the issue of horrendous atrocities against Xinjiang Muslims.  A couple of years ago, not a single Muslim country diplomat attended a meeting organised by the US and European countries at UNHRC, Geneva, in which a former inmate of Xinjiang's so-called re-education camps was narrating his tale. Not only that, they all went to a meeting organised by China to say that all was well with Muslims in China.

Clearly, this is all politics. Of course, there are issues in India facing Muslims, Dalits farmers, labour, and women and so on. But what have Arabs and Pakistanis to do with these. They should introspect on how they treat their own weaker sections. In fact weaker sections face problems around the world, most of all in America and China, but Arabs and Pakistanis never speak against that or boycott Chinese goods. Arabs do not lift a finger or even speak against Myanmar, no matter how horrendous atrocities against them. In India, there are problems, but we have to sort these out among ourselves. Also, these problems are not of the same degree as facing Muslims, other minorities and weaker sections around the world.

It, therefore, appears that the Boycott_India_Campaign run on twitter apparently by the Arabs is not actually being run by the Arabs but by the people belonging to Pakistan and Muslim Brotherhood.

Such campaigns will only prove counterproductive for Muslims and those running these campaigns are not true well-wishers of Indian Muslims but want to exploit them for their own political agenda.