A Slice of Muslim Life In The Heart Of Seoul 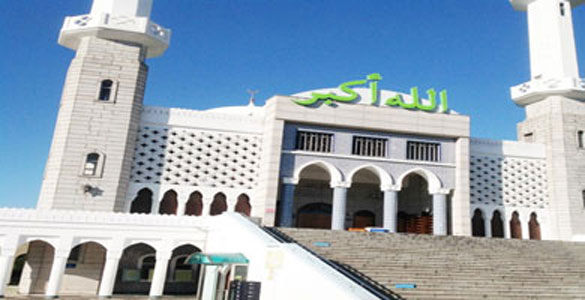 The aroma of Arab food permeates the atmosphere, restaurants displaying halal food banners are everywhere, women wearing hijab and men with beards are seen walking in the streets. There are shops offering Haj and Umrah tours.

At first sight, you feel that you are in some Arab or Muslim country, but the neon signs and display boards tell you otherwise. This is the Itaewon area in Seoul, a predominantly Muslim neighborhood.

The Korean Tourism Organization is promoting this part of the city to attract tourists from Muslim countries.

“Tourists from the Arab region are a big draw for us,” Jaesung Rhee, executive vice president for international tourism, told Saudi Gazette over lunch in one of the halal food restaurants in the area.

Just a few yards from the restaurant is the Central Seoul Mosque, an imposing structure which also houses the Prince Sultan Islamic School.

It was Friday so the area was bustling with Muslims: Koreans and foreigners.

There are 35,000 ethnic Korean Muslims, A Rahman Lee, Ju-Hwa, imam of the mosque run by the Korea Muslim Federation, told Saudi Gazette.

There are 15 mosques and 60 musallals (makeshift mosques) in South Korea, where Islam came just after the Korean War, the imam said.

After the Korean War, Turkish soldiers were posted to the region as peacekeepers in 1955. They introduced Islam to Koreans.

Slowly and gradually Islam spread in Korea where about 50 percent of the people say that they do not follow any religion.

Most of the youngsters that Saudi Gazette met in Seoul said that they have no religious beliefs.

Hwang, Jeong Ho, who works at the AJU News Corporation, said he used to practice Christianity, but now he does not follow any religion. The same was the case with Jae Yoon Lee, an interpreter and a translator.

Imam Lee, who himself embraced Islam in 1985, said that before Muslims came to Itaewon, the area was notorious for illegal and illicit activities.

“Alhamdulillah, now the Itaewon-ro (street) and most of the surrounding areas like Yongsan-gu, Jongno-gu, etc. are clean of any bad elements,” he said.

The Korea Islamic Foundation, which was registered in 1967 with the Ministry of Culture and Sports, runs a madrasa, has Shariah and halal committees and translates and prints Islamic books.

It also runs the Prince Sultan Islamic School which was opened in 2000 with money donated by the late Crown Prince Sultan Bin Abdul Aziz.

Today, some 65 students attend the school, says Imam Lee, who graduated in Arabic language and Islamic studies from Madinah Islamic University in 1985.

The Korea Muslim Foundation has also been authorized by the government to issue halal certification to restaurants and butcher shops.

However, there are no official halal slaughterhouses in Korea, said Kim Jin Woo, general manager of the Korea Institute of Halal Industry.

Most of the halal meat is imported from Australia and New Zealand, said Kim, who embraced Islam a month ago at the ripe age of 60.

Kim, who now calls himself Muhammad Ibrahim, has been actively involved in promoting the halal industry. He has even registered the Korea Institute of Halal Industry with the agriculture ministry.

He expects such a halal standard to be in place within two to three years.

Kim spent many years in Malaysia and was impressed by the equality and fairness in Islam. He was studying the religion, but took the decision to embrace it only a month ago. He said that he has not disclosed this to even many of his family members, including his daughter and parents.

Islam in Korea is still in a nascent stage, only 0.25 percent of the population follow Islam. Outside Itaewon, Islam does not have a presence. Most Koreans are not even aware of halal food and standards. Koreans have no preconceived notions. So they are very open to beliefs which are new to them. Islam definitely seems to have a promising future in the Republic of Korea.