Instead Of Pointing Out Faults, They Need To Stand With Shah At This Important Juncture.

1.    Naseeruddin Shah’s video made its impact as it riled both the Hindu right wing and a section of Muslims, including some who would like to see themselves as progressive Muslims.

2.    Muslim organizations’ refusal to condemn the Taliban is downright worrying but what is perhaps more worrisome is the refusal of the progressive Muslims to see it clearly.

3.    Naseeruddin Shah might have linked Islam with medievalism but why are we so indignant about it? Isn’t our theology and jurisprudence still medieval?

4.    These Muslim progressives should strengthen the likes of Shah rather than shielding Muslim conservatism.

In the wake of the return of Taliban and the celebratory posturing of a few Indian Muslims, Naseeruddin Shah posted an indignant video in which he condemned those who were happy to see the coming of the Islamists. Informed by what the Taliban had done to the country when they first took power, Shah termed them as bestial and barbaric. He questioned whether Muslims should be looking forward to modernity or should pine for the return of this medieval mindset. The video was short, sharp and crisp. The fact that it made its impact is clear from the fact that it riled both the Hindu right wing and the Muslim sympathizers of the Taliban.

Shah made a distinction between Indian and other varieties of Islam and argued that Indian Islam was tolerant and appreciative of pluralism. He implied that those celebrating the Taliban have no understanding of this difference. The Hindu right wing seized upon this distinction to point out how Indian Islam was implicated in the killing of ‘millions of Hindus’, ‘destruction of their cultural heritage’ and a ‘veritable erasure of their identity’. However, while pointing this out, they singularly fail to tell us how despite the long years of such ‘barbaric rule’, the Hindus still constitute an overrwlming majority of 85 per cent in this country. The whole point of the Hindu right wing discourse is to argue that Islam is essentially the same everywhere. That it is a religion of violence and that at its core is the idea of Islamic supremacy. This view is completely a-historical because Islam has always fused with local cultures and flavours and therefore one cannot talk of Islam in the singular. But then the Hindu right wing has an agenda to fulfil and painting Islam as an unchanging unitarian barbaric cult helps them immensely. 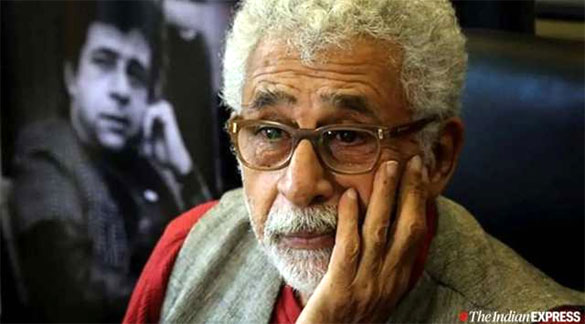 What are the Muslim objections to Shah’s message? And within this category are not just those Muslims who celebrated the return of the Taliban but also those who present themselves as modernist and progressive voices within the community. There are two sets of related objections that they have raised.

They have argued that Shah seems to be implying that all Muslims in India celebrated the return of the Taliban which is factually incorrect. They point out that only a few Indian Muslims welcomed their return and because of this to paint the entire Muslim community with the same brush is patently wrong. There might be some merit in this argument but then what is the barometer of gauging that the celebrations came from a small section of Muslims? There is no way of knowing it as there isn’t any survey conducted to the effect. The only way perhaps to understand it is to see what position hegemonic Muslim organizations took on the return of the Taliban. As I wrote earlier, not just that there is no outright condemnation from the sundry bodies of Deobandis, Barelwis and the Ahle Hadees, but that in the past (and some in the present) they have always been close to the vision of what the Taliban is proclaiming. Who can deny that an average Barelwi, despite his differences with the Deobandi, does not endorse the vision of the Talibani Sharia or that of the Islamic state? These organization have millions of followers. Their refusal to condemn the Taliban is downright worrying but what is perhaps more worrisome is the refusal of the progressive Muslims to see it clearly.

The second objection to Shah’s videos is that he urged Indian Muslims to choose between the mediaeval Islam of violence and a modern, forward-looking Islam. The objection here is that Shah painted the entire mediaeval Islamic history as bestial. It is argued that not only was he factually wrong but that in saying that Indian Islam was different, he was only lending credence to the right-wing claim that it became so because of the civilizing effect of Hinduism.

I do not think that it was Shah’s intention to state that Muslim history in only about ‘barbarism’. We know that Islam made significant contribution to India’s history, chief among them was its idea of equality. But then the problem which some progressive Muslims (most of them upper caste Ashraf Muslims, who take pride in having a foreign lineage) have is that they do not want to accept that Hinduism also had some positive effect on Islam, may be in terms of a certain moderation in thought and acceptance of pluralism. How can Islam, which calls itself the perfect religion, accept anything from an inferior polytheistic religion?

Shah might have also linked Islam with mediaevalism because all our theology and jurisprudence is still mediaeval with hardly any change in them at all. This being the situation, shouldn’t one choose between mediaevalism and modernism?

Indian Muslims are in a unique position because their country is still secular and democratic, however truncated it might have become. It was this uniqueness that Shah was trying to underline. Within this context, if Muslim organizations do not condemn the Taliban, it can only mean that secularism, democracy and the constitution are empty words for Muslims which only have value in relation to protecting their sectarian interests.

I am sure that some progressive Muslims can see through this charade and yet refuse to be alarmed by this tendency.

Partly the ‘progressive’ Muslim is doing this because they want to ‘save’ Muslims from the Hindu Right's relentless Islamophobia. After all the coming of the Taliban was welcomed not just by a section of Muslims, but also by the right-wing Hindus who used the opportunity to showcase what ‘true’ Islam was all about. But this urge to save Muslims has only had one effect which is to close all conservations around the issues of religious conservatism and possible reform. In the name of fighting Islamophobia, why is the progressive Muslim aligning with the orthodoxy? If one takes the position that this is not the right time for Shah to voice his concerns; that it will be appropriated by right wing Hindus, then perhaps the likes of Shah should never speak up.

These Muslim progressives are adding nothing original to the debate. They are simply aping the stale leftist rhetoric which because of their supreme ignorance of Islam and Muslims never engaged in such questions. In a complex world, there is never a right context and in any given context what one writes or says can be used for some other purpose. The context of the ascendance of Hindu right wing should not stop Muslims from condemning the Taliban. Neither should it stop them from calling out those in India who support the Taliban. This is time when we need to stand up for courageous voices like those of Shah. Any failure to do so would only strengthen the religious orthodoxy within the Muslim community.