Caste System Was Promoted By Delhi Sultanate in India

3.    Converts from Hindus maintained their social status in their newly adopted Muslim society. 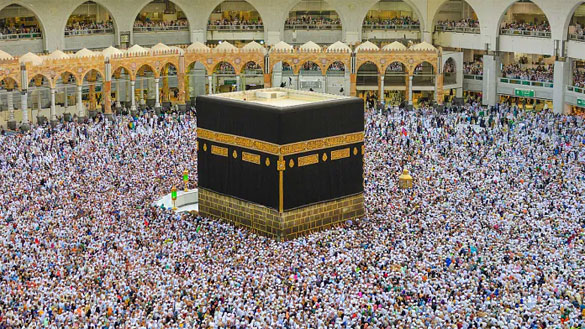 The caste system is alien to Islam and Islam strictly opposes and disapproves of any preference given to an individual or a group on the basis of caste or community. The Quran and hadiths categorically say that piety is what makes a man dear to God and his prophet. A person's social standing or status does not count.

However, as the Islamic empire spread far and wide and more and more non-Muslims converted to Islam, the culture of the non-Muslims also influenced the thought of the Muslims. In India, where the caste system was dominant in the majority Hindu society, the caste system entered the Muslim society. During the Delhi Sultanate that ruled from the 13th to the 16th century, the terms Ashraaf, Ajlaaf and Arzaal became widespread. High caste, low caste and untouchables were also carved out among the Muslims. During the Delhi Sultanate, no lower caste Muslim was appointed as a bureaucrat or a courtier. This casteism among the Indian Muslims was popularised by the Delhi rulers and was a direct influence of the casteism prevalent among the Hindu society.

Also Read:  Prophet Muhammad (Pbuh) Does Not Have Caste System but Upper Caste Muslims (Ashraafs) Have Put It There To Maintain Their Dominance in Society: Pasmanda Activist Faiyaz Ahmad Fyzie

However, casteism did not appear in the Muslims of India overnight. During the Umayyad caliphate, when the Islamic empire reached Ajam (non-Arab territories like Iran), the neo Muslims of the Ajami world were called Mawali. The term was used to distinguish Arab Muslims who considered themselves superior in race from the non-Arab Muslims. Thus, the seeds of casteism among the Muslims was sowed much earlier.

The casteism among the Muslims of India, however, is more prominent and is deep rooted in India because the majority of the Muslims of India are converted. In India, the Hindu society was divided into four major castes -- Brahman, Kshatriya, Kayestha and Shudra. When they converted to Islam, they were allowed to maintain a parallel social status in their newly adopted Muslim society to encourage them to embrace Islam because a higher caste Hindu found it difficult to see himself on an equal social pedestal with, for example, a Shudra whom he did not consider worthy to be even called a human being. Therefore, Syed, Shaikh, Ansari, Rayee, Mansuri, Malik, Araqi, and other castes were carved out among the Muslims according to birth or profession.

This tradition of casteism among the Muslims is in complete violation of the Quranic principles of equality and the sense of Arab cultural and racial supremacism is at the rot of it. The Arab and Turk rulers shaped the polity and society of India and they promoted casteism in India.

It is also interesting to note that Buddhism, despite being an older religion as compared to Islam did not allow caste system to enter its fold, though many of the rulers in the peak of Buddhism were Buddhists and many rulers, ministers and bureaucrats or teachers were converts from Hinduism or Brahmanism. And because Buddhism did not have a caste system, during the downfall of Buddhism people preferred to adopt Islam rather than Hinduism as Islam too did not have a caste system. We find that Islam spread in the parts of Asia where Buddhism was once prevalent. India, Afghanistan, Indonesia, Malaysia are the regions where Islam had a smooth transition from Buddhism because of non-casteism in Islam. Islam preached the belief in a Supreme God who was the creator Sustainer and destroyer of the Universe and protector of the human beings from evil forces. Buddhism preached that there was no God Creator. It believed in Shunyata (Void). This created a spiritual void among the followers of Buddhism and so they converted to Islam to fill this void.

But ironically, Muslims, unlike Buddhists, allowed casteism into Islam to promote Islam among Hindus though Islam opposes any such compromise for the sake of spreading the religion. This was only because of the deep-rooted sense of cultural and racial superiority of the Arabs.

It would be naïve to negate the existence of inequality and discrimination in Muslim societies on the basis of various denominations, but it would also be equally unwise to unearth any divine theory of caste system in the early age of Islam. It is tantamount to the rejection of the established history and the foundational principles of the religion.

The debate on the caste system in Muslim societies needs to be put in perspective instead of attempting to excavate its root in Islam. The single most important authority in Islam was the Prophet Muhammad and no one can alter anything in the religion, no matter how big a scholar or political leader they are, and that includes the Sahaba (Prophet’s companions). Precisely, no one can attach piety or impiety to any acts and terms whatsoever. So, all the debates surrounding the Ashraaf, Ajlaf, and Arzaal categories of Muslims should be viewed in the Indian context. These terms are alien to Islam.

In an article by Dr. Faiyaz Ahmad Fyzie, the writer says that the early Caliphs in Islam were selected on the basis of caste — the Quraysh being the recipient of the privilege. In this context, the writer’s attempts to interpret Ashar-e-Mubashira and ‘Quraysh superiority’ in the context of caste do not stand true, both principally and historically. Notably, in the parlance of divine theory, caste was first used in Arabia only in the 17th century in the context of the Hindu system of social stratification. The Arabs were completely unaware of the term and its implications. Therefore, excavating a caste angle in the list of Ashra Mubashira is utterly wrong. The writer does not only contradict the basic principles of Islam but also his own admission in the beginning when he mentions that the Prophet was “against birth-based discrimination”. While Sunni Muslims agree on the number of the Sahaba accorded the Basharat (declaration for heaven), the Prophet had, on other occasions, mentioned other personalities — including Khadija bint Khuwaylid, Fatimah bint Muhammad, Maryam bint ‘Imran, and ‘Asiyah bint Muzahim — as ones who would also enter Paradise.

In the same vein, finding a caste angle in the nomination of early Caliphs is again misleading. Perhaps, the writer did not come across the complete history or interpret the aforementioned incidents in the correct way, though the article is indeed well-intended.

First, there is no denying the fact that the people from Quraysh tribe, into which the Prophet was born, enjoyed the authority to rule the erstwhile Muslim world. However, the arguments presented by the author to support his preconceived notion are based on half-truths. The choice of the Quraysh for the post of the Caliph was made by the Prophet himself before his death. His pick was in accordance with the Quranic directive of “Amruhum Shura Baynahum (Their system is based on their consultation)”, which refers to a democratic process. While saying that the political authority shall remain with Quraysh, he also clarified the reasons for it. He argued: “People in this matter follow the Quraish. The believers of Arabia are the followers of their believers and the disbelievers of Arabia are the followers of their disbelievers.” (Muslim, Kitābu’l-Imārah).

In another account, the Prophet said: “The people of Arabia are not aware of anyone’s political leadership except that of the Quraish.  (Musnad Ahmad Ibn Hambal, vol 1. P. 56). Precisely, he said that the Quraysh enjoyed the trust of the Arabs, so the ruler would be from the same tribe. It was the best available choice he had to apply the democratic principle on the ground. After all, there was no election commission or electronic voting machines to know the trust of the people for electing a leader. On the other hand, it is well-documented that the Prophet often gave precedence to the suggestions of the Ansars of Medina over Muhajirs (companions who arrived from Mecca) since the former were in majority. Therefore, there are various incidents documented in several books that prove that the views of the Ansars prevailed in the decision-making process. But the situation evidently changed after the fall of Mecca.

Second, the event of Saqifa was not mentioned wholly where stalwart Ansari companion Sa‘d ibn ‘Ubadah reportedly claimed for Caliph. The Ansari companions were delivering stirring speeches to prove their entitlement to the leadership of the Arabs, but Abu Bakr reminded them of the Prophet’s saying: “O Sa‘ad! You know very well that the Prophet (sws) had said in your presence that the Quraysh shall be given the Khilafat because the noble among the Arabs follow their nobles and their ignobles follow their ignobles.” None other than Sa‘ad himself came forward and replied: “What you say is correct, we are your advisers and you are our rulers.”  (Musnad Ahmad Ibn Hambal, vol. 1, p.5) Of the four rightly guided Caliphs, (Khilafat-e-Rashida), only one (Alī ibn Abī Ṭālib) belonged to the Hashimite clan. Notably, 10 clans were in the tribe. The other three belonged to three different clans — Taim, Adi and Umayya — Abu Bakr, ʿUmar ibn al-Khaṭṭāb, and Uthman ibn Affan.

Third, the Prophet and his companions fought the first battle against the Quraysh and the members of the Hashimite clan were the first to oppose him. Prophet called Abu Jahal the “father of ignorance” after he refused to embrace Islam. His actual name was ʿAmr ibn Hishām, and he was also commonly known as Abu Hakam, meaning ‘father of wisdom’. In the Battle of Badr, and many subsequent battles, there were many companions who fought against their own sons, fathers, forefathers, and uncles. There are innumerable verses in the Quran and the Prophet’s statements clearly put that the best among the people are those who do good deeds and believe in Allah. Prophet Muhammad said in his last sermon: “There is no superiority of an Arab over a non-Arab, or of a non-Arab over an Arab, and no superiority of a white person over a black person or of a black person over a white person, except on the basis of personal piety and righteousness.”

Ashraf Quamar is a Delhi-based journalist currently working for Media Today, a communication firm that extends services to UN agencies. He was former chief sub-editor at Hindustan Times. Quamar has also worked for The Statesman, Sahara and other media outlets. Views are personal.