New Zealand Terror Attack at Two Christchurch Mosques- What Is Needed for Muslims to Do?

The recent hate-filled terror attack, in which 50 Muslims praying at two mosques in the New Zeeland city of Christchurch were killed and 50 others injured, has widened the cracks in the hearts of peace-lovers- both Muslims and non-Muslims, around the world. The terrorist shooter, identified as 28-year old Australian citizen Brenton Harrison Tarrant, has been charged with murder. He was motivated by the ideology that ‘western civilisation’ needed to be saved from a foreign invasion, as stated in a 74-page manifesto filled with anti-immigrant, anti-Muslim ideas. In his manifesto, Tarrant wrote that he had “only one true inspiration: the Norwegian political terrorist, Anders Breivik, who killed 77 people in 2011”. 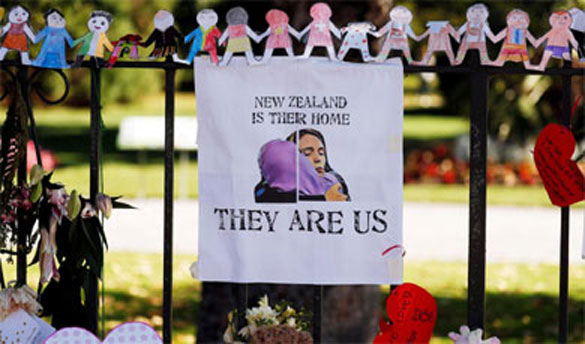 It was extremely painful to watch the brutal terror incident in which we lost our humane relatives, individuals or community partners. However one of the simplest ways to get healing from such a tragedy is how the global leaders and community respond to it. The wise people say “it is better to just stay mum instead of speaking or writing insensitively”. Different people expressed their condolences differently, while for some it would have been better if they had obeyed this wise saying.

A non-Muslim writes on twitter, “Where is the uproar in the Muslim community against the slaughter by ISIS etc in terror attacks around the world? Nothing is ever seen except token, “we condemn” type statements”.

(To read a number of articles refuting ideologies of ISIS and it's likes, click this link:

A Muslim initially wrote in Urdu on social media, “49 Muslims have been killed in New Zealand but western media is not calling it terrorism, the way they blame Islam for terrorism”. He went on to say, “There is no uproar against Christchurch terrorism attack, like the one took place in Paris a few years ago”.

Different people made different views- some with typical attitude of denial, confining to their respective domain of life, areas of information and studies.

Most prominently New Zealanders, in the wake of Christchurch terror attack, have showed their outpouring of interfaith solidarity and dug deep – crowd funding campaigns, donating Halal food and even offering to chaperone the Muslims now afraid to go out on the streets. The major role in this part was played by New Zealand Prime Minister Jacinda Arden, who was seen wearing a ‘Dupatta’ and visiting families of the victims. She received appreciation from a large number of Muslims on social media- with some referring to as “an example of great and just leadership in this century”.

According to reports, the nationalities of the victims included Indian, Pakistani, Malaysian, Indonesian, Egyptian, Bangladeshi, Saudi, Somalian and Turkish. One Indian that I know is a Barelvi Sufi Cleric and a graduate of Manzar-e-Islam Bareilly, Maulana Musa Patel. He was invited to make a speech in Al-Noor mosque but was killed unfortunately.

A very positive message came from an Imam, Ibrahim Abdul Halim, who was leading prayers at the Linwood Mosque of Christchurch when a terrorist, brandishing semi-automatic weapons, mowed down his congregation. He said that Muslim community’s love for New Zealand would not be shaken by the massacre. Vowing that extremists would “never ever touch our confidence”, the Imam said, “We still love this country”. He said the majority of New Zealanders “are very keen to support all of us, to give us full solidarity”, describing how strangers exchanged hugs with him on Saturday. “They start to... give me big hug, and give me more solidarity. This is something very important” he said.

Not only the common people even the global leaders strongly condemned this act of terrorism. Here are some brief reports as compiled by newageislam.com.

New Zealand Prime Minister Jacinda Ardern said some of the victims may have been new immigrants or refugees. “They are us,” she said. “The person who has perpetuated this violence against us is not. They have no place in New Zealand.” She termed it ‘an act of terrorism’.

Norwegian Prime Minister Erna Solberg said the attack brought back memories of the 2011 attack by anti-Muslim extremist Anders Breivik that killed 77 people: “It shows that extremism is nurtured and that it lives in many places.”

Britain’s Queen Elizabeth, who is New Zealand’s head of state, said she was “deeply saddened by the appalling events”.

Pakistani Prime Minister Imran Khan wrote on social media, “I blame these increasing terror attacks on the current Islamophobia post-9/11 (where) 1.3 billion Muslims have collectively been blamed for any act of terror”.

Turkey’s President Recep Tayyip Erdoğan condemned the deadly attack on two mosques in New Zealand, saying, “With this attack, hostility towards Islam, that the world has been idly watching and even encouraging for some time, has gone beyond individual harassment to reach the level of mass killing”.

Saudi Arabia’s King Salman tweeted, “The heinous massacre that targeted worshippers in the mosque in New Zealand is a terrorist act, and it reaffirms the responsibility of the international community in combating hate speech and terrorism that is not condoned by religions or the values of tolerance.”

Turkish Foreign Minister Mevlut Cavusoglu tweeted, “Not only the perpetrators, but also politicians and media that fuel the already escalated Islamophobia and hate in the West are equally responsible for this heinous attack”.

According to report of Iran’s state news agency IRNA, Iranian Foreign Minister Mohammad Javad Zarif called for an emergency meeting of the Organization of Islamic Cooperation, the world’s largest Muslim body, to discuss this “horrible crime”

Al-Azhar University, Egypt’s 1,000-year-old seat of Sunni Islamic learning, called the attack “a dangerous indicator of the dire consequences of escalating hate speech, xenophobia and the spread of Islamophobia”.

A spokesman of United Nations Secretary-General Antonio Guterres said, “The urgency of working better together globally to counter Islamophobia and eliminate intolerance and violent extremism in all its forms”.

German Chancellor Merkel mourned “with the New Zealanders for their fellow citizens who were attacked and murdered out of racist hatred while peacefully praying in their mosques”. Her foreign minister, Heiko Maas, said: “When people are murdered solely because of their religion, this is an attack on us all.”

Sadiq Khan, the first Muslim mayor of London, said Londoners stood shoulder to shoulder with the people of Christchurch. He also pointed his finger at those who promote religious hatred. “When the flames of hatred are fanned, when people are demonised because of their faith, when people’s fears are played on rather than addressed, the consequences are deadly, as we have seen so sadly today,” he said.

The director of Islamic Centre of Washington D.C, Abdullah Khouj, delivered his speech, calling for peace and condemning violence and hate. He recited a well-known verse from the Quran,

“Whoever kills a person, unless in retribution for murder or spreading corruption in the land, it is as if he kills all mankind, while if anyone saves a life it is as if he saves the lives of all mankind. (5:32)”

US President Donald Trump tweeted “My warmest sympathy and best wishes goes out to the people of New Zealand after the horrible massacre in the Mosques. 49 innocent people have so senselessly died, with so many more seriously injured. The US stands by New Zealand for anything we can do. God bless all!”

Mr. Molly Pascal, a member of the Tree of Life synagogue and resident of Pittsburgh, penned an article titled “Muslims Embraced Us Jews When We Were Slain At Worship. Now We Must Support Them” published on The Washington Post. He writes, “When I saw the news from New Zealand Friday, the cracks in my heart widened. Another act of terrorism. Another act of hate. I know something of what the Christchurch community is going through because less than five months ago, my community went through something similar. On Oct. 27, a terrorist murdered 11 members of my synagogue in Pittsburgh”. (Newageislam.com has published couples of worth reading columns related to NZ attack)

If we Muslims ponder over different opinions with regard to the NZ terror attack, we may come across so many questions. Why do we Muslims not respond to “Jihadist attacks” in more number than the non-Muslims including white people have done to “white-supremacist attacks”? Why do we not take it seriously when our fellow citizens are regularly killed by ISIS and its likes in Syria, Iraq, Yemen and other parts of the Muslim countries? Is it enough for us to express merely words of condemnation and describe the radical jihadist groups as Kharijites and do nothing more than that?

Do the Muslim scholars not need to reclaim spiritual message of Islam to defeat the modern radical narratives emanating from the wrong interpretation of Islamic books? Is it enough for us to issue some anti-terror Fatwas, while the ‘jihadist extremists’ repeatedly issue their propaganda, every time with slight changing and new tricks?  Why is it that the hate is growing against Muslims? Is it because of our attitude or misinterpretation of Islamic books or something else? We Muslims should do introspect ourselves. Where is our Taqwa? Where is our faith which asks us to be honest, patient, truth-seekers and peace-lovers? How can we ensure the world that Islam prefers peace while our Muslim brothers fight with one another- for example, in Muslim countries? How can we all global community succeed to stop ‘white-extremism and ‘jihadist extremism’? How can we correct the mindset which fails to retain balance, creates hate against Muslims and non-Muslims and incites havoc and tragedy? It is time we all should cooperate with each other and introspect so as to develop healthy and peaceful global relationship.