How To Offer Eid Prayer And Make Sacrifice

Sacrifice Is Obligatory On Everyone Who Can Afford It

1.    Eid-ul-Adha prayer has two Rak’ahs which are to be performed in congregation. 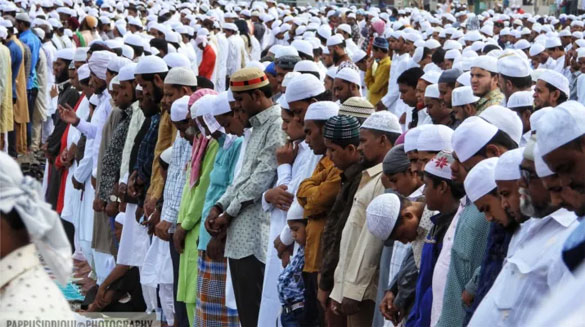 Eid-ul-AdhaSermon: It is Sunnah that the Imam should deliver the sermon after the Eid-ul-Adha prayer. People who keep talking during the sermon or leave the sermon are actually are committing the wrong. A short prayer should be offered and a short sermon should be delivered in the lockdown. The sermon can also be read by looking into a booklet. If no one can deliver a sermon in any place, then the Eid prayer will be performed even without the sermon, because the sermon of Eid is Sunnah and not obligatory. Short surahs of the Holy Quran can also be recited in the sermon. Two sermons should be given like on Friday. Between the two sermons, the Imam should sit on a stair or chair for a while.

Eid-ul-Adha Sacrifice: In the light of Qur'an and Hadith, the Islamic scholars have written that Sacrifice is obligatory on everyone who can afford it. Only one sacrifice from all the members of a household is not enough, rather, every affordable Muslim (who is in possession of about 35,000 Rupees) should make a sacrifice on his behalf. It is better for a person to make more than one sacrifice, because according to the command of the Holy Prophet (صلى الله عليه وسلم) no good deed in the days of sacrifice is more beloved and pleasing to Allah than shedding the blood of the sacrifice. One partis allowed in a male and female goat, ewe, male and female sheep, and young sheep, while 7 people can participate in cow, ox, buffalo, and camel. The male and female goat must be of one year old, while cow and buffalo must be 2 years old and camel must be 5 years old. Avoid cow sacrifice in the places where cow sacrifice is banned by the government. Sacrifices can be performed at any time of the day or night, from 10 Dhu al-Hijjah till the sunset of 12 Dhu al-Hijjah. But it is better to do it during the day and particularly on the first day. The stove used not to burn in the house of the Holy Prophet, for many consecutive months due to the lack of foodstuff, yet he used to offer sacrifices every year with special care. Since, the sacrifice is an Islamic motto and obligatory, every effort should be exerted to slaughter animals on the day of sacrifice. If for some reason you cannot sacrifice yourself, get it to be done somewhere else. By the way, if the sacrifice cannot be offered on the day of sacrifice despite the effort is made, then the price of the sacrifice should be distributed among the poor after the days of sacrifice have passed. The sacrifice is a charity. The Nafil sacrifice can be also offered by the deceased just like other Nafil alms that we normally use to offer by them. HazratAli (RA) the cousin and son-in-law of the holy prophet (SAWS) used to offer sacrifices in his whole life, on his behalf (SAWS) every year since his death. The sacrificial animal must be flawless and healthy. The Sacrifice will take place only after Eid prayers in the cities. However, in the villages where Eid prayers are not offered, the sacrifice can be performed at any time after dawn. It is not necessary to make three parts of the sacrificial meat and be distributed, but it is better to be done like this: One part for your home, another for relatives and a third for the poor. Islamic teachings have drawn special attention towards cleanliness and purity, therefore, on this occasion, make complete arrangements for cleanliness and do not put the sacrificial waste in a place that will cause any inconvenience to anyone.

How to sacrifice: lay down the animal on its left side, recite BismillahAllahu Akbar and slaughter the animal with a sharp knife in such a way that the four veins are cut. The "throat": the windpipe, the "visible": the esophagus, the "Jugulars": the two blood vessels called the aorta. Even if three of these four veins are cut, the sacrifice will still be halal. The neck should not be totally cut off at the time of slaughter. After slaughtering, leave the animal for a while so that all the blood comes out. Then take off/peel the skin. Read this supplication before slaughtering the animal.

Read this prayer after slaughter

If the sacrifice is offered on behalf of someone else, say "Min" instead of "Minni" and name that person. And if there are seven participants in the sacrificial animal, then the names of the seven are to be inevitably mentioned.