In the Wake of Killings in France, Some Questions to Fellow Muslims

A faith system, which has given succour to millions in the last 1400 years, is today held hostage by a set of cartoons. In the wake of beheadings and murders in the name of Islam, several Muslim opinions, both in the social media and in the form of popular articles, have raised more questions than they have answered. Some of these opinions are clearly conservative voices, but others see themselves as moderates and liberals, and yet there is a disturbing similarity in their articulation. It is high time that we, as Muslims, ask some questions about our religion. This article, in teasing out certain common refrains across Muslim articulations, is a small attempt in that direction.

This is not about Islam: One of the common refrains is that the beheadings and murders have nothing to do with Islam. The onus, in this narrative, shifts to the individual transgressor who is said to have committed an act of violence due to his own ‘motivations’ and a failure to ‘correctly’ understand Islam. We tell ourselves that Islam is essentially a religion of peace and hence it does not sanction or endorse such killings. This nonsense has been repeated so many times that it has really lost any value whatsoever. And despite the routinisation of this nonsense, our ‘religion of peace’ has failed to stop such killings in its name. The trouble is our refusal to see that no religion, including Islam, is about peace or war; they are fundamentally a set of commands. 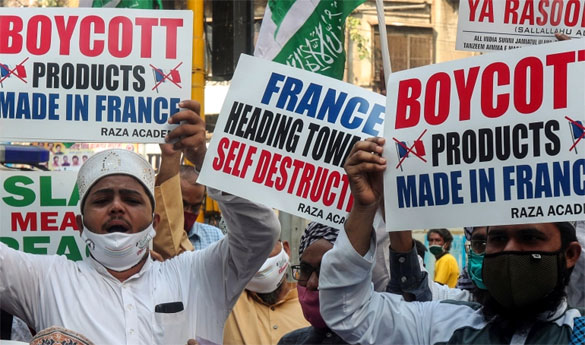 All religions have peace and conflict inherent in them. It really depends on the followers of the religion to interpret it in such a way that it becomes a vehicle of permanent peace. So far, there has been no effort in this direction in Islam. As regards Islam being inherently peaceful, it flies in the face of its own history. Islam (like many other religious ideologies) is implicated in the killing and maiming of millions. Most of such killings have even been glorified. We need to ask ourselves whether we can absolve Islam of such crimes. Why should we shy away from the fact that Islam can motivate people to kill? There is no other way of looking at the recent killings other than to link them to an understanding of Islam which teaches its followers to avenge any perceived insult to the Prophet.

It is not permitted in Islam to draw cartoons and ridicule the Prophet: Largely this is true. Although in its early history, Muslims did use drawings of Muhammad as an aid to ritual remembrance. But those drawings, which are still permitted in Shia Islam, were not deemed offensive. So the question is not really about drawing of cartoons but what is deemed offensive in the eyes of Muslims. The real question is whether Islam would allow the satirizing and lampooning of its Prophet. The unequivocal answer is no, it would not. However, we as Muslims are making a mistake because these caricatures were not made in Muslim countries or by Muslims. They were made in France which is certainly not a Muslim country.

We need to ask ourselves why a secular country will abide by the legal and moral expectations of Islam. Do Muslim countries show any tolerance to secular points of view? If that was the case, then why did the Saudis punish Raif Badawi and why did the lovers of the Prophet kill secular bloggers in Bangladesh? We must remember that France is a country with a deep history of anti-clerical movement. Satire and the freedom to express a point of view without any inhibition, including the critique of established religions, is so important that it is almost the founding myth of the French republic. Giving up on religious critique is for the French what for Muslims would be akin to giving up their love for the Prophet. Why is it so hard for us to understand that there are cultures in this world whose assumptions about humanity can be different from theirs?

This is nothing but Islamophobia:  Nonsense. Anything that is even mildly critical of Islam and its practices is being dubbed Islamophobia. When the Runnymede Trust would have used the terminology, it would never have thought that it would be used to silence all criticisms of a way of thinking, parts of which do not gel with contemporary times. We, as Muslims, will do well to remember that anyone critical of Islam is not an Islamophobe and any criticism of Islam does not qualify as Islamophobia.

Certainly there is an issue of racism in Europe but then it is also an issue in much of the Arab world. Even those who went to join the ISIS recalled that they were deemed fit only to clean the toilets just because they were Indian Muslims. However, one hardly comes across any criticism of Arab racism within much of Muslim writing. Why such singular focus on Europe when these issues are rife within the community itself?

Nemesis of French colonialism: Really? And beheading someone is the way in which we demand that the French confront its colonial past? Is beheading the way to tell them that they oppressed Muslim countries like Algeria and Mali? But we have been mostly silent over what the French recently did in Libya. We have not made any demands that the French apologise for their excesses in Algeria.

We have not said anything against the skewed monetary policy which the French have with former North African colonies, designed to keep them in perpetual debt? Where is our angst, why are there no Muslim protests over these issues? It appears that we are really not concerned about issues which define the asymmetry of power between the west and the Muslim world. Rather our reason for recalling the French colonial past is just another excuse to justify such killings in the name of Islam.

It appears that we are not even concerned about the plight of fellow Muslims. How do we explain ourselves that while our so-called leaders have spoken about ‘French madness’, they have chosen to remain silent on what the Chinese are doing to Muslims? There is now ample documentation to prove that China is waging a war not just on Muslims but on Islam itself. Mosques have been bulldozed, shrines destroyed and Islam itself has been called a disease. Certainly, one can understand why Pakistan and Imran Khan cannot utter a single condemnation of China, dependent, as it is, on Chinese economic and strategic support. But why are our Ulama, the real fiery red-eyed ones, silent about it? How much influence and leverage does China have in the Muslim world that it has managed to buy the silence of Muslim religious leaders the world over?

Large numbers of Muslims do not support such violence in the name of Islam: We know that the opposite is true. Granted that large numbers of Muslims are too busy worrying about daily issues of survival. However, when we see the same large numbers of Muslims rallying in Bangladesh and demanding that Shias be declared as Kafirs in Pakistan, then how do we understand it? Till the time we do not face the truth, we can never discuss such events dispassionately. And the truth is that such acts have widespread support within Muslims. Even enlightened ‘modernists’ like Muhammad Iqbal supported such killings.

If we recall the Rangila Rasool controversy in colonial India, Iqbal showered praises on Ilmuddin, the killer of Rajpal, who had published a disparaging pamphlet on the Prophet. During his funeral, Iqbal eulogised the murderer, arguing that his whole corpus of work is nothing when compared to the love of Prophet displayed by the carpenter Ilmuddin. If our intellectuals, who are supposed to chart new courses for the community, take us back to medieval morality, then what can be expected from the common folk? The average Muslims believe what the religious leaders tell them. In all such demonstrations, the prime slogan is to kill those who dishonour the Prophet. We only delude ourselves when we say that Muslims do not support such acts.

The Prophet would have responded differently. May be. May be not. Our own theology tells us that on certain occasions, the Prophet did in fact sanction the killings of those who had insulted him. It is important to reiterate that most of those killed were poets, the intellectuals of their time. On other occasions, he is said to have looked the other way. The way our Islamic theology has developed, we have justified such killings in our religious texts. Stating otherwise would simply be deceiving the wider world and ourselves that such commands are not part of our theology. Till the time we do not question these texts and state unequivocally that they should no longer be applicable, nothing good is going to come by guessing what the Prophet would have done. Unfortunately, we have created such an intolerant system for ourselves that anyone who asks for such revision is either killed or forced to go on exile.

As Muslims, we must take some responsibility for the toxic system that we have created. Blaming the Jews, the French, the British, Islamophobia or colonialism is not going to help. Let us grant some agency to ourselves to accept that we have brought this upon ourselves, and now it has started affecting others too. It is only this recognition of our own complicity that will impel us to change the system.