Is Islam Really Facing A Crisis, As French President Emmanuel Macron Said After The Beheading Of Samuel Paty

Recently the French President Emmanuel Macron said that Islam was in crisis. His remark was made in the backdrop of the growing extremism, separatism and radicalism and disenchantment from non-Muslims in the Muslim community not only in France but also in large parts of the Muslim world. This phenomenon is particularly evident among the Muslim youth who are being driven towards extremist and militant organisations. 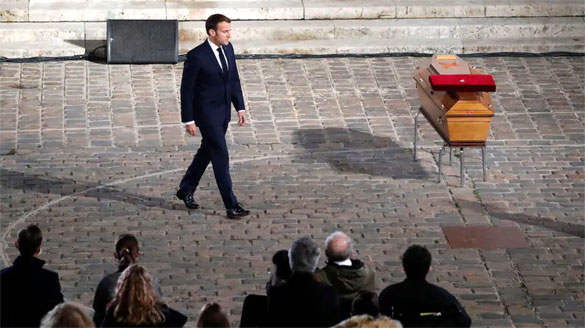 In European countries, Muslims tend to form their own ghettoes thanks to some European governments' policy of segregation. But also to blame for this is their own Islam supremacist mindset. Macron had not only urged Muslims to bring reformation within their community but had also advised the Christian community to study and understand Islam. Therefore, he was speaking not as a leader of Christians but as the President of a democratic country. He cannot be blamed for expressing Islamophobic ideas. He was most likely expressing his idea of a truly peaceful pluralist society. His thoughts were not one sided but balanced and pragmatic. Indeed, he expressed his plans to deal with extremist elements in the Muslim community that were dividing the French nation between us and them. In his view it was due to the 'foreign influences' (naming Muslim Brotherhood) that created a feeling of otherness among the Muslim community in France and encouraged them to form a counter-society within the French society.

But his remarks were not taken by the Muslim world in the right spirit and was described as Islamophobic. He was harshly criticised by prominent Islamic figures for his alleged 'anti-Islam' remarks. But when we analyse the reaction of prominent Muslim figures, we find that the Muslim scholars, leaders and imams are not on the same page on the issue of Islamism, blasphemy etc.

For example, on the beheading of the history teacher named Samuel Paty by a Chechen Muslim youth named Abdullakh Anzorov on the charge of blasphemy different Islamic scholars have given different reactions. The Salafist cleric Abu Qatadah al Filastini praised the killer saying he did the right thing and that Muslims were an Ummah that knew its rights. He was saying indirectly that a Muslim had the right to kill anyone who spoke ill of the Prophet (pbuh) and that any individual Muslim could execute the Shariah law. But another hard-line Islamic scholar, Sheikh Ali al Yousuf, a member of International Union of Islamic Scholars gave a different view. Sheikh Ali al Yousuf believes that killing the blasphemer has been supported by Shariah but only an Islamic State has the right to punish him, not just any individual Muslim or group.

Contradicting the two, Imam Hassan Chalghoumi, President of the Conference of Imams of France denounced the murder of Samuel Paty (as un-Islamic) and said that Islamism was a poison, a disease, and should be banned by the government of France.

This is not the only issue on which the Ulema radically disagree. They cite the same Shariah while expressing radically different judgments on the same crime, in different contexts too.

There are other issues like secularism and the right form of government for an Islamic country. For example, one religious organisation says secularism is compatible with Islam while the other says it is akin to atheism.

On the form of government, the imam of Colorado Islamic Centre believes that only Caliphate is the prescribed form of government and Muslims can only prosper under a caliphate. His belief is similar to the beliefs of the ISIS while Indian scholar Allama Iqbal believed that democracy was compatible with Islam and the Arab Islamic scholar Muhammad Asad opined that the Presidential form of government with some modifications was the best suited to modern Islamic countries.

Interestingly, no Islamic country today likes to be called a Caliphate. They call themselves Kingdom, Emirate or Islamic Republic and no Islamic scholar or the common people have any problem with them as long as they are on the right side of the governance. Ironically, it is the terrorist organisations that call themselves the flagbearers of Khilafat for winning the sympathy and support of the common Muslims.

Then again there are severe sectarian and ideological differences that have not only caused riots and bloodshed but also civil war and massacre in earlier centuries and in the 21st century.

Violence has become a way of life and the second nature of Muslims the worldwide though, at the same time, Muslims don't tire of parroting the claim that 'Islam is a religion of peace.'

Doesn't all this point to an ideological crisis among the Muslims? At the most one can say that Islam is not in crisis because Islam's principles and teachings are clear, but it's the varied interpretations of the principles enshrined in the Quran and Hadith put forward by different Ulema that has caused the crisis the Muslim world is in. That means that Muslims have to acknowledge that there is indeed a crisis, if not in Islam then in the Muslim religious thought. Saying that there is no crisis at all and criticising non-Muslims for holding the mirror up to their face will be an unrealistic world view and an Ostrich-act.