Overruling A Nearly Five-Decade Judgment, The Kerala High Court Has Restored The Rights Of Muslim Women For Unilateral Divorce Without Resorting To Judicial Proceedings. It Has Recognised That Islamic Shariat Allows Gender Equality And Allows Women Too, Like Men, To Practice Extrajudicial Divorce.

1.            Divorce by Men or Khula by Women – Holy Quran Advocates Equality. Quran recognises the right to divorce of women.

2.            Islam provides women several instruments for getting away from an intolerable marital relationship unilaterally, without resorting to judicial intervention:

a) Talaq-e-Tafweez allows to dissolve the marriage if husband fails to keep his end of the contract;

b) Khula lets the woman unilaterally divorce her husband by returning his dower;

d) Faskh allows dissolution by intervention of a Qazi.

e) Lian, If a husband charges her wife with adultery and cannot produce any evidence, the wife is entitled to obtain a divorce.

f) Khyar-ul-Bulugh, If an innocent girl child has been given in marriage, she can cancel the marriage when she reaches her age of puberty. 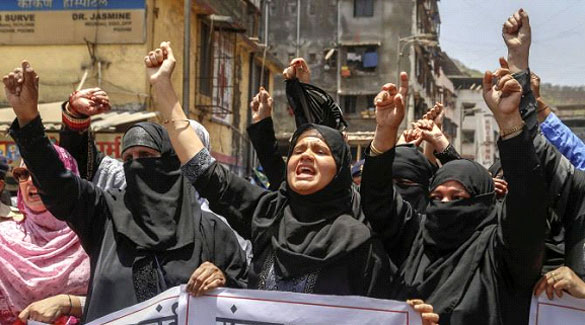 IMAGE: Kindly note that this image has been posted for representational purposes only. Photograph: PTI Photo.

Noting that the Holy Quran recognises the right to divorce equally for both men and women, the Kerala High Court bench observed that the dilemma of Muslim women, particularly in the State of Kerala, came to the fore when the single bench in the 'K C Moyin versus Nafeesa and Others' case negated the right of Muslim women to invoke extra-judicial divorce in the light of the Dissolution of Muslim Marriages Act, 1939 in a judgement in 1972. The single bench then had held that under no circumstances, a Muslim marriage can be dissolved at the instance of the wife, except in accordance with the provisions of the Act. In its judgment given yesterday (April 14, 2021), the division bench of Justices A Muhamed Mustaque and C S Dias analysed four major forms of dissolution of marriages as recognised under Islamic Law and protected under the Shariat Act at the instance of the wife.

According to a Press Trust of India report ‘Muslim women have right to invoke extra-judicial divorce, rules Kerala HC as it overturns 1972 judgment’ which declares that the bench comprising Justices A Muhamed Mustaque and C S Dias found that under the Shariat Act Muslim wives have been given the privilege of dissolving their marriages according to their will. The bench observed that there are four different ways by which a marriage can be annulled on the demand of a wife.

According to this report, it was noted by the court that the Holy Quran, which means Allah, the Almighty, recognises women’s right to divorce unilaterally without invoking court proceedings, on an equal footing as do men.

Some of us Muslims do not acknowledge the right to gender equality mentioned in the Quran and spread misinformation that Islam differentiates between the rights of the two sexes. This has happened because soon after the demise of the Prophet, Arab customs and patriarchy prevalent in other parts of the world where Islam spread, asserted itself overwhelming Quran’s rulings and a clear guidance on gender equality and justice. Even today, Islamic courts in Saudi Arabia and other Muslim countries differentiate between the rights of men and women, particularly in the matter of unilateral divorce and behave most abominably towards young nine or ten-year-old girls, forcing them to live with their elderly husbands.

As far as equality between husband and wife, or men and women in general is concerned, there is absolutely no difference between them in Islam. Both of them are promised the same reward and the same punishment for their conduct. The Holy Quran says:

While talking about equal rights of men and women, Islam does not distinguish between genders and always mentions human being, or mankind, in the Holy Quran. In the famous Surah al-Baqarah verse 30, Allah the Almighty says to the angels that He is sending on the earth His representatives. Allah does not distinguish between men or women when He is saying of sending His representatives on the earth. This is the value granted by Allah to all humankind.

Behold, thy Lord said to the angels: "I will create a vicegerent on earth. (Surah Al-Baqarah 2:30) - Yusuf Ali

Can there be any doubt that humankind means, both men and women? There is no question of the superiority of one gender over the other, as Prophet Muhammad (SAW) has said in his last sermon. In the eyes of Islam, all are equal, there is no question of one gender being superior to another. Men and women have different responsibilities to perform on this earth, but they have equal rights, even if they have different duties and different roles to perform.

Islamic history is full of real historical events which depict women as businesswomen, statesmen and warriors who fought along with men on the battlefields. Islam has given equal rights to women in unilaterally taking or giving divorce to their spouse.

Muslim wives can resort to following ways of divorces:

Under this system of divorce, the husband vests in his wife the right to divorce.

An irrevocable divorce by mutual consent.

In this system of divorce, a wife can apply for divorce in the court of a Qazi and get her marriage annulled.

If a husband charges her wife with adultery and cannot produce any evidence, the wife is entitled to obtain a divorce. This is called Lian

If an innocent girl child has been given in marriage, she can cancel the marriage when she reaches her age of puberty.

All the above-mentioned ways of divorce are for the women to come out of a marriage if and when she so wishes.

Khula is another way of Islamic divorce, the power of which has been invested into the wife. The wife can take divorce from her husband after returning all the gifts and mehr she has received from her husband. This can be settled in the court of a Qazi. According to Islamic traditional Fiqh, Khula allows a woman to initiate the process of a divorce. Khula has got a mention in the Quran in Surah Al-Baqarah 2:229, and in Surah An-Nisa - 4:127.

There is a famous narration of Ibn 'Abbas in connection with a Khula divorce as follows:

The wife of Thabit bin Qais came to the Prophet ﷺ and said, "O Allah's Apostle! I do not blame Thabit for defects in his character or his religion, but I, being a Muslim, dislike to behave in an un-Islamic manner (if I remain with him)." On that Allah's Apostle ﷺ said (to her), "Will you give back the garden which your husband has given you (as Mahr)?" She said, "Yes." Then the Prophet ﷺ said to Thabit, "O Thabit! Accept your garden, and divorce her once." (Bukhari #63, Hadith #197)

In Islam women’s right is absolute. These have to be understood and rightly used in empowering them in society. Muslim women empowerment will be empowerment for society. They are a part and parcel of our everyday life. They should enjoy the confidence of the Islamic society as they enjoy the confidence of Islam. We, Muslims must give them their due in every institution of the society. We must always keep in mind that Islam advocates equality of mankind in every possible way.