Sir Syed Ahmad Khan: A Catalyst for Reconstruction of His Community, an Advocate of Rationalism and A Pioneer of Modern Education 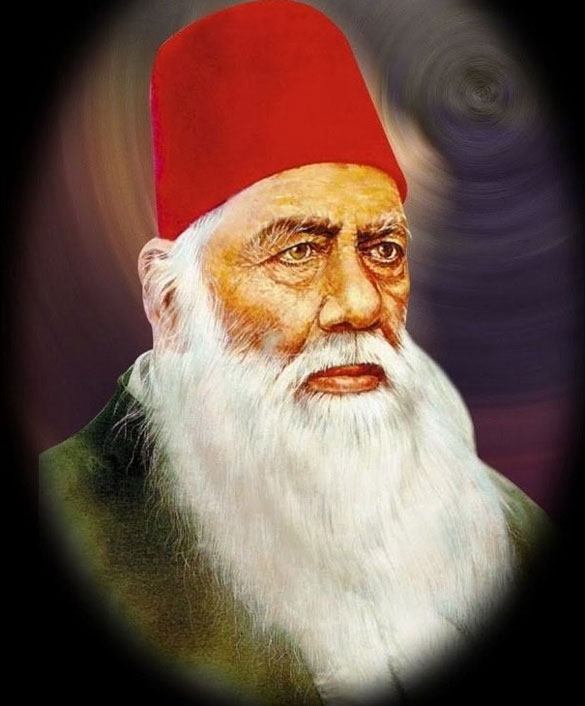 Sir Syed Ahmad Khan (17 October 1817- 27 March 1898) holds significant importance in Indian history- as an educationist, historiographer, journalist, social reformer, and the founder of Mohammadan Anglo Oriental (MAO) College, which became Aligarh Muslim University in 1920. But this does not end here. He was, in real sense a catalyst for reconstruction of his community, an advocate of rationalism, and a pioneer of modern education. Post 1857, his concern was not restricted only to subvert misconceptions related to the role of Muslims or build an educational institution. He genuinely attempted to prepare a roadmap which could help his coreligionists in coping with the challenges they were facing, and serve as a vanguard in future too.

His notion of modernity held clear view of progressivism; although it can be contested, but no one can negate the colossal contributions he made. Also, some historians note that Indian society at that time rigorously held traditionalism, but Sir Syed believed that such approach would disturb onrushing of people to development and urged them to embrace modern scientific education. So, a number of times in his speeches, he emphasized the importance of western education and persuaded his coreligionists to abandon their conventional approach, indigenous institutions and adopt new knowledge. For instance, in 1863, while addressing a gathering at Calcutta (now Kolkata), he said, ‘The reason why we are backward is that whilst we were learned in and have benefited by the philosophy of the science and arts of the antiquity, we were entirely ignorant of those of modern times’. And in 1877, during the inaugural ceremony of the MAO College (Aligarh School was established in 1875, and two years later it became MAO College), his son, Syed Mahmood said, ‘The social condition of our community- the traditions of the past, to which time has lent a charm- no less vague than prejudicial- the religious feeling inculcated with our earliest infancy- have been, and still are, obstacles to a thorough appreciation of English education’.

It must also be noted here that his support for English education did not emerge from any kind of aversion or dislike for the traditional approach, rather he found modern education as the need of the moment; as a potential tool for Muslims to rescue themselves from oblivion. In his book Aligarh’s First Generation, noted Historian, David Lelyveld writes, ‘Sayyid Ahmad considered Madarsa education better than what the British schools had to offer, but unlikely to lead India into a new future’. He further narrates an incident when one of Sir Syed’s companion was raising funds to establish a Madrasa in Delhi, he (Sir Syed), who was in England then, felt exasperated and wrote him a letter, and warned that such steps would only deteriorate the condition of Indian Muslims, and not grant them any honour.

Also, his idea of progress through modern education stemmed from his experiences in England. His letters to his companions disclose his restlessness whenever he would see the life and education system there in England. He would often express his admiration and write that Muslims could improve their condition through English education only. Besides his experiences, Lelyved writes, he also learned that Muslims outside India, like Egyptians and Turks had already adopted European-style education for emancipation of their people. In India too, he saw social reformers like Raja Ram Mohan Roy, who worked to incorporate human reason and modern western thoughts, and Swami Dayanand, who used rational approach to interpret Vedas.

Therefore, he proposed that the only key to progress and development of a community which is facing multiple crises is modern education.

Today, when we compare the educational status of Muslims with other communities, we find them at the bottom of the heap, and wonder if there is any remedy to this fiasco. Yes! Sir Syed’s proposal of education is the potential remedy- to counter some of the hardships community is facing today- a close analysis can make it clear. Educational status of Muslims in the mid and late 19th century was even worst. In his book Aligarh Movement and the Making of Indian Muslim Mind, 1857-2002, eminent journalist Tariq Hasan shows that in 1860, according to the official statistics, Hindus and Muslims constituted 85.7% and 8.4% respectively, of those enrolled in the government colleges in the North West Provinces. Another report he shares, prepared by Viceroy Lord Mayo in 1871, stated that percentage of Muslim children in Bengal and most other parts of the country was very low.

This conundrum compelled Sir Syed and his companions to come forward and make efforts for the upliftment of their community. Besides them, other reformers were also working to acquaint their community members with the modern education. They included Badruddin Tayyabji, Justice Syed Amir Ali, Nawab Latif Khan Bahadur, Nawab Salar Jung etc. It  would not be incorrect to say that their endeavour to help the oppressed brought, if not massive, a significant change in their educational status. It becomes evident from the Memorandum of the Progress of Education in British India 1916-26, which stated, ‘The percentages of the Mohammadan community were more favourable than the percentages for all communities together, and even figures for Mohammadan girls alone did not fall below the figures for all classes for female pupils. Even at the collegiate and secondary stages, the proportion of the Mohammadans have been well maintained’.

But after 1947, situation drastically changed due to the damages caused by the partition and now after more than seventy years, this debilitated state of affairs couldn’t make much progress. It’s extremely difficult to narrate the story of seventy years in a brief article, but if we go through the data for last four decades, we will find that Muslims, as a community, are lagging behind others and responsibility for this stagnation falls on both, the state and the community itself. National Sample Survey Organization, in it’s 43rd round (1987-88) revealed that among Muslims, 42.4% male and 59.5% female in urban areas and 58.2% and 76.1% female in rural areas, were illiterate, which was lower than all other communities. Again in 1997, the Report by the Committee of Governors on the Welfare of Minorities, submitted to the President made similar submissions. The Sachar Committee Report also highlighted the educational deprivation among Muslims and stated that despite overall improvement in educational status, the rate of progress has been the slowest for Muslims. The report further said that there is a strong need for, ‘a significant shift in the policy of the state along with the creation of effective partnership with private and voluntary sectors’. The report has been kept as a culinary masterpiece; previous government didn’t care to implement; and the now ruling dispensation is unwilling to even admit Muslim’s presence, let alone any affirmative action to improve their educational status.

So, now in times of extreme social and political crisis, the responsibility however falls on both the state and the civil society, but keeping state’s diabolical policies and silence over growing animosity against the minorities in view, it is worthless to expect any suitable action. Thus, the civil society, especially Muslims (educated and well off section) should begin the task to systematically analyse the nature of deficit, identify factors behind the impoverishment, make community members aware about the remedial measures, and take appropriate action. This will certainly be a blow to the pride of the likes of Sudarshan TV. Also, an immediate reform in Madrasa education is also required because a significant Muslim population still prefer sending their wards to such indigenous institutions. In their book Madrasas in the Age of Islamophobia, renowned journalist Ziya-us-Salam and noted scholar Mohammad Aslam Parvaiz discuss in detail the condition of Madrasas in India.

They believe that a false notion of knowledge i.e. religious sciences and worldly sciences are separate and mutually opposed, is still prevalent, especially in Madrasas and that’s why students in both the categories; those in modern educational institution and those in Madrasas are not getting true understanding of Islam, which is a complete way of life and commands everyone to excel in both Islamic and worldly knowledge to become beneficial people. They further insist that, ‘We need model Madrasas, where comprehensive education is imparted, where along with the translation and recitation of the Quran, students learn modern sciences and languages’.

However, this doubles the responsibility- as our struggle against the far-right forces continues in one hand, we also need to mobilise uneducated section of the society, especially Muslims in an effort to improve their status in particular, and contribute towards the development of the county in general, as Sir Syed did. As Edward. W. Said says, ‘We cannot fight for our rights and history as well as future until we are armed with weapons of criticism and dedicated consciousnesses.

As Aligarh Muslim University celebrates its centenary year, the institution and people associated to it should take the charge to initiate the task of reforming the lives of the underprivileged sections of the community and country. Grand celebration and dinner parties (which are organised every year in the university campus and by alumni associations) don’t really suffice the objectives of a prestigious educational institutions.