1.    The Quran preaches good treatment of neighbors, travelers and needy without mentioning their religion.

2.    Contextual war verses were meant only for the time of war and confrontation.

3.    Quran tells Muslims to treat their non-Muslim parents with respect and compassion.

4.    Mixing the contextual war verses with the universal verses led to the confusion. 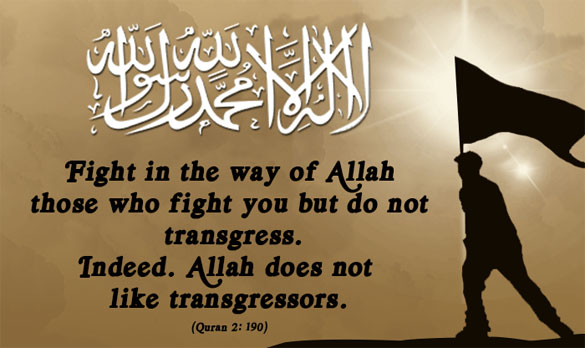 The holy Quran is the fountainhead of Islamic Shariah. It is a book of guidance for Muslims on social, political and personal life of Muslims. But the Quran has two categories of verses. One, contextual verses that were revealed to guide the Muslims on how to deal with the enemies and what to do in case of aggression by the enemies during the life of the prophet pbuh.

These war verses were meant for wartime. In the verses Muslims were allowed to fight the enemies to protect them and their interests.  Two, there are universal verses that form the basis of Islamic Shariah. These verses advise Muslims to be considerate, compassionate while dealing with the Muslims and non-Muslims. These verses guide the Muslims in the time of peace and when we study these verses closely and keenly, we find that the holy Quran preaches peaceful co-existence with non-Muslims.

Indeed, the Quran envisages a society where every individual will be concerned by the evils of the society and will continue to work to remove the social and religious ills. He will also continually work for the emancipation of the downtrodden and the oppressed and at the same time work to spread the message of unity of God. But he will never resort to pressure or violence or coercion to spread the message of God.

God says in the Quran that he has endowed man with wisdom and intelligence and so he is himself responsible for what he does and for his beliefs. He has left food for thought in his creations and in his own body. So, the work of the Muslims is only to draw man’s attention towards the mastery in the creation in the universe and advise man to do good and abstain from evil.

“We sent them˺ with clear proofs and divine Books. And We have sent down to you ˹O Prophet˺ the Reminder, so that you may explain to people what has been revealed for them, and perhaps they will reflect.” (Al Nahl:44)

In no verse, does the Quran advise or instruct Muslims to be violent to the non-believers because the Quran time and again says that not all of the people on earth will believe in truth because of the disease in their heart. God does not bless wicked people with wisdom. In fact God says that He seals the hearts and ears of those who are wicked and do not want to hear the word of God and do mischief on earth.

“And who does more wrong than those who, when reminded of their Lord’s revelations, turn away from them and forget what their own hands have done? We have certainly cast veils over their hearts—leaving them unable to comprehend this ˹Quran˺—and deafness in their ears. And if you ˹O Prophet˺ invite them to ˹true˺ guidance, they will never be ˹rightly˺ guided”.(Al Kahf:57)

“This is how Allah seals the hearts of those unwilling to know ˹the truth˺”.(Rum:59)

Allah has sealed their hearts and their hearing, and their sight is covered. They will suffer a tremendous punishment” (Baqarah:7)

“In the above quoted verses, God clearly says that He has sealed their hearts because of their mischief and so the even the messenger cannot guide them to the right path. Therefore, Muslims wont be able to bring them to the right path and so it  will be imprudent to use violence against them as it will only cause collateral damage and cause anarchy in the society instead of establishing peace on earth.

God also tells the prophet pbuh not to be distressed by their mischief and their disbelief because if they do not believe and do not listen to his words, it is because God has sealed their hearts. It is only the  people with good sense who will listen to the word of wisdom and truth.

“Now, perhaps you ˹O Prophet˺ will grieve yourself to death over their denial, if they ˹continue to˺ disbelieve in this message.”(Al Kahf:6)

The Quran makes it very clear that the messengers were sent only as deliverers of the message of God and warners against the hellfire. Therefore, the Muslims should also not use violence against the disbelievers of wicked people. God says that whoever comes to the right path it is in his own interests and whoever does not listen to the message of truth it  is to his own loss. No Muslim is responsible for the misdeeds of others.

“We do not send the messengers except as deliverers of good news and warners”.(Al Kahf:56)

Nor can you lead the blind out of their misguidance. You can make none hear ˹the truth˺ except those who believe in Our revelations, ˹fully˺ submitting ˹to Allah˺.(Al Naml:81)

You surely cannot guide whoever you like ˹O Prophet˺, but it is Allah Who guides whoever He wills, and He knows best who are ˹fit to be˺ guided.(Qasas:56)

Nor can you lead the blind out of their misguidance. You can make none hear ˹the truth˺ except those who believe in Our revelations, ˹fully˺ submitting ˹to Allah˺.(Rum:53)

The Quran wants Muslims to become an example for the world and so preaches them to act with justice with all the people whether they are Muslims or non-Muslims. He is expected to behave with courtesy and decency in all the matters of society. The holy prophet pbuh was very compassionate with the Jews and Christians and the polytheists and would help them in need. He did not support unjustified violence against any body.

“Indeed, Allah commands justice, grace, as well as courtesy to close relatives. He forbids indecency, wickedness, and aggression. He instructs you so perhaps you will be mindful.”(Al Nahl:90)

The Quran envisages a society where the Muslims will live in peace with the non-Muslims and grant them their social, religious and political rights. At the same time, they will fulfill their duty of enjoining good and forbidding evil in a peaceful manner.

It was because of taking the contextual war verses as the universal teachings of the Quran that the ideology of violence became popular among the extremist sections of the Muslims. They ignored the fact that war is only a temporary phase in the life of any community or nation. Muslims also passed through that temporary phase during the initial stage of Islam when it faced existential threat. After that period was over, the universal verses of the Quran preaching peace and peaceful co-existence came into effect. But the extremist interpretations of the war verses of the Quran considering them the universal message of Islam gave way to extremist and then to terrorist ideology. It gave birth to terrorist outfit that fed on this wrong interpretation of contextual war verses.

The fact is that the Quran enjoins on Muslims to treat their neighbors, travelers, feed the hungry, help the needy without mentioning their religious background. Humanism is the core of the Quranic message. It also asks Muslims to treat their non-Muslim parents with respect because humanistic values are more important to the Quran. The sanctity of human life is paramount before the Quran. This is why the Quran says that killing one innocent person is akin to killing the whole humanity and saving one innocent life is akin to saving the entire humanity.