2.    Women of other communities also assert their religious identity in different ways.

3.    Rising popularity of Hijab is a result of communal polarisation.

Sameera Khan has taken up the issue of Hijab in college campuses from a different point of view. The issue is being debated and discussed even in the courts from a religious point of view to find out if Islam really asks Muslim girls to wear Hijab to school. Ms Sameera Khan analyses the issue from social and multicultural point of view.

She says that the growing trend of wearing of Hijab by young Muslim girls has its roots more in social and cultural factors than in religious ordainments. Muslim girls today are more assertive than those, say, 30 years ago. Today's Muslim girls ride bikes and attend colleges for higher education but at the same time they assert their religious identity by wearing Hijab. In the last ten years, the percentage of attendance of Muslim girls has almost doubled from 6 per cent to 13 per cent. This paradox of bike riding and college going girls wearing Hijab may require some deep analysis of social and psychological factors.

Apart from claiming that Hijab is their constitutional and religious right, Muslim women wear Hijab because they feel secure in a Hijab. It also gives them the feel of not being noticed by unwanted glares in public space. Mob lynchings, riots and name callings are other reasons for more and more girls wear Hijab today. Not only Muslim girls even non-Muslim women too choose a particular dress as a strategy. So Hijab is a complicated issue. It should not be taken as a simple religious issue. It is a fact that nowadays Muslim households impose Hijab in girls because of growing religiosity among Muslims but it's also a fact that today a large section of girls independently choose Hijab as a social statement and they have accepted it as a part of their outdoor dress.

Therefore, any ban on Hijab may disturb the trend of Muslim girls opting for higher studies and dreaming of becoming professionals as already some girls refused to remove the hijab and left the exam hall. A guest lecturer resigned her job because she did not want to remove Hijab. Religion has a very important place in the lives of Indians.

Therefore, before deciding on the Hijab issue, our judiciary should weigh all the pros and cons of the issue. 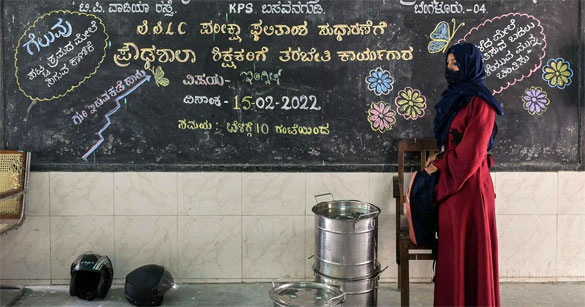 A student stands during the morning prayers at a government high school and pre-university college for women in Bangalore. | Manjunath Kiran / AFP

Of all the relentless images from Karnataka to which we have been subjected in the last few weeks, no doubt the one everyone will remember Muskan Khan for the uncommon bravery she exhibited – raising a defiant fist as she entered her college building when accosted alone by mobs of men with saffron scarves screaming “Jai Shri Ram”.

But the section of the video clip of this 19-year-old student in the small town of Mandya that continues to stay with me is of a self-assured woman driving her two-wheeler to a parking spot and then walking swiftly, with her head held high, towards her classroom with a knapsack slung on her back.

That this earnest young student rushing to submit a college assignment was wearing the hijab should have been almost incidental to our gaze. Unfortunately, in recent days that is all most of us can see.

Also Read:  On The Hijab Controversy

Though it started with the hijab becoming the focus of attention for some government college administrators in Karnataka who closed the gates on hijab-clad Muslim students, it then attracted Hindutva-influenced hordes of young men (and also some young women) who taunted the hijabi Muslim girls. Both demand a ban on hijabs in the classroom.

This has riled up orthodox Muslim groups, insistent on strict adherence to the hijab as a matter of religious and constitutional right, as well as many progressive liberals who while against the bigotry on display remain conflicted by the patriarchal imagery of the veil.

As someone who closely examines women’s access to public space in general and also specifically researches Muslim women’s negotiations with public space for work and pleasure, I think that we need to centre this discussion in a more nuanced reality.

A reality that acknowledges that in India today there is a perceptible hardening of attitudes towards Muslims in general and an increase in negative feelings and vicious actions against them. While the last three decades has seen a rise in violence and hatred against Muslims, since 2014 this violence has not just been normalised but even condoned by the state.

Each incident of name-calling, rioting, lynching and more has prompted the growing spatial and social polarisation between Hindus and Muslims causing mistrust and prejudice between these communities to spread. This has particularly impacted the less empowered groups within these communities the most, namely women.

My research shows that Muslims as a community feel under threat and surveillance and this complicates the issues surrounding Muslim women’s access to the public and sexual safety.

Whether the hijab is integral to Islamic identity or not is not the moot point here – though no doubt the courts will immerse themselves in this very issue. A move to take away the hijab from Muslim women who wish to adhere to it in public has to be weighed against the prevailing reality of what might then be lost by all Muslim women in the process.

Certainly education, particularly Muslim women’s access to secondary, higher secondary and advanced levels of education, could be one such major loss. A statement put out by non-governmental organisations working in the field of education and gender equality warns of increased dropout rates among girls at a time when the Covid-19 pandemic has already exacerbated educational inequity.

It points out that girls and young women are often “systematically excluded from educational institutions” on many counts including caste and religion, a fact that is “rarely acknowledged or discussed”.

Aliya Asadi, 17, #Karnataka state karate gold medalist, went to nationals 5 yrs ago, sole #Muslim contestant with a #hijab. Udupi teen is among those at centre of #hijabrow, now has trouble sleeping, parents say she cries in sleep @afra_abubacker reports https://t.co/3K4iN419TJ

This would be a shame considering many more Indian Muslim girls are now enrolled and attending school and college, in some cases surpassing Muslim boys.

According to the John Kurrien report on Muslim education released earlier this year, as per the 2017-’18 National Sample Survey 75th round, the Net Attendance Ratio for Muslim girls at the upper primary (Class 6-8) level of 66% and at the higher secondary (Class 11-12) level of 31% was higher than that of Muslim boys.

Though fewer Muslim girls are enrolled at the higher education (college) level compared to Muslim boys or even girls from any other religious community, statistics show that the ratio of young Muslim women attending college is slowly on the rise. Data analysed from the 64th and 75th rounds of the NSS by Khalid Khan of the Indian Institute of Dalit Studies in The Indian Express shows that between 2007-’08 and 2017-’18, the Gross Attendance Ratio of Muslim women in higher education in India increased from 6.7% to 13.5%.

Also Read:  The Many Meanings of Hijab

Interestingly, while there is no data proving a co-relation between hijab wearing and women’s education, anecdotal evidence demonstrates that the number of Muslim women wearing hijab in India has gone up at the time that more Muslim women are attending schools and colleges and even pursuing employment outside the home.

The hijab has a more complicated role in the lives of Muslim women than just as a religious marker. Interviews with Muslim women and girls in a variety of settings reveal that their reasons to wear the hijab differ widely. Sometimes it is a result of traditional socio-cultural-religious conditioning imposed by families and local communities – this is especially so when women reside in homogenous community specific neighbourhoods – and imbibed by young women.

But often it also involves many other rationales: for instance, hijab-wearing is shown to increase in the aftermath of communal violence. This is both as a protective device and as some young women mention, a form of resistance that in the face of hostility becomes a way to assert and visibilise their community identity.

Wearing a hijab should be a personal choice, but the #HijabRow in India's Karnataka state has exposed strong communal rifts fueled by divisive politics. https://t.co/gQxhsD8XzJ pic.twitter.com/qadzRGMEqI

Those who in recent days have easily criticised young hijabi Muslim women as being mere pawns in the hands of political and orthodox forces need to understand that many young women see the hijab as an enabler and very knowingly use it in strategic ways as a tool to further their access to the public – to study, to work, to commute and indeed even seek pleasure.

In fact historically, as feminist and nationalist struggles in countries like Algeria, Egypt and Turkey have shown, the veil has been used or discarded depending on prevailing conditions – sometimes used as a symbol of anti-colonial resistance, at other times fallen into disuse in an attempt to assert modernity, as Margot Badran notes in Feminists, Islam and Nation: Gender and the Making of Modern Egypt.

Similarly women of other religious communities often use other devices to maximise their access to the world outside their home – be it the Bindi, Mangalsutra, Dupatta, or Sari.

As my colleagues Shilpa Phadke Shilpa Ranade and I found when we researched women’s negotiations with public space for our book Why Loiter? Women & Risk on Mumbai Streets, all women strategise in a multitude of ways – what they wear is only one of those tools – to make their way in public and to access resources such as education, work and pleasure.

Civil society, institutions and the courts need to recognise these complex negotiations women make to place in context the current hijab-ban at educational institutions in Karnataka.

So, what if this ban stays? It is possible that some Muslim women who wear the hijab may elect to quietly fold it into their bags when they enter their schools and colleges. On the other hand, others may be compelled to drop out of the educational system or pursue higher education at Muslim-run institutions.

This will mean that not only will they lose out on the opportunity to make friends across the boundaries of religion (and non-Muslim students will lose out on similar opportunities to friend them), they will also miss the chance of learning to interact with mainstream society and institutions.

There is an urgent need to protect the rights of all young Muslim women, whether they wear the hijab like Muskan Khan or not like Aroosa Parvaiz, the recent Jammu and Kashmir class 12 topper who was subjected to ridiculous online trolling by the Muslim right-wing for not wearing the hijab, because like all other young women everywhere, they too deserve to be on a diverse and inclusive educational campus where they feel safe and accepted for who they are and where their dreams and aspirations are respected and upheld.

Sameera Khan is a Mumbai-based journalist, writer and researcher.

Source:  Why The Right Of Young Indian Muslims To Wear The Hijab Must Be Protected