Despite The ‘Righteous Resistance’ Of Liberals Against Trump, Biden Continues To Support Israeli Oppression

1. The change from Trump to Biden was just an image makeover, primarily for the liberal American establishment.

2. They have singularly failed to call out the structural problems in American policy.

3. The State of Israel helped Hamas in order to finish the secular resistance by PLO.

4. Israel wanted it this way to de-legitimize the Palestinian struggle.

During an earlier time, the liberals in America and elsewhere made it appear as if whatever was wrong in the world was because of Trump’s policies. Trump is no longer in the White House but the massacre of Palestinians continues unabated. Israel continues to evict Palestinians from their homes, bombard them at will, kill and maim scores including children and women. And yet the American establishment under Biden is standing solidly behind Netanyahu, justifying his murderous rampage. Not only is America supplying arms to Israel which is killing civilians, it is also defending it by whitewashing the crimes of a cruel and morbid regime. What Israel is doing is simply inconceivable without American support and therefore America is equally complicit in whatever is happening to the hapless Palestinians.

This is not to say that Trump shouldn’t have been opposed but to point out the hollowness of the ‘resistance’ of the left-liberal establishment for not calling out the structural faults in American policy itself. The reasons are simple: for the liberal Americans, Trump became too much of an embarrassment internationally. The liberal establishment wanted to portray themselves civilized caring people who were concerned about the ills of the world. 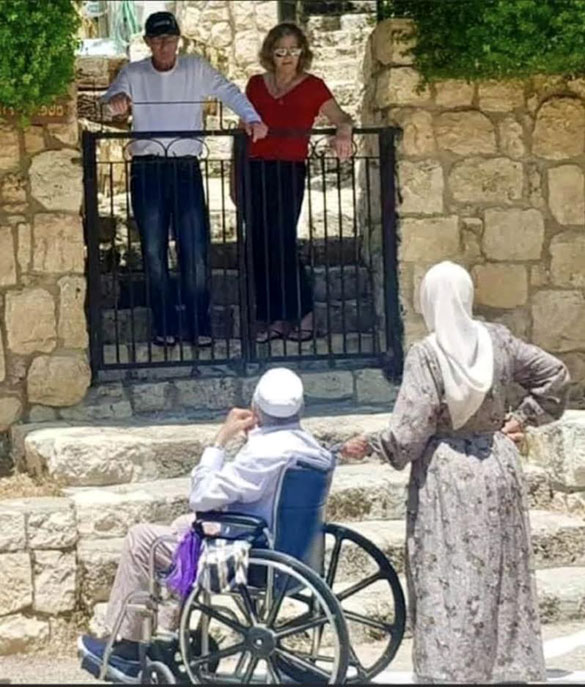 An old Palestinian couple in front of their stolen home now inhabited by Jewish settlers from Brooklyn, New York.

But more fundamentally, they were more worried with regard to the manner in which things were being done. Just look at the liberal establishment’s support for Obama. The man was singularly responsible for putting in place the drone warfare and surveillance system which killed thousands all over the Muslim world. But then, Obama was sophisticated and conducted himself in a way which appealed to the self-image of the liberals. It did not matter if under the veneer of this sophistication, Obama did pretty little to change the way America conducted its business. It is therefore reasonable to argue that it is not the content but only the form which matters to liberals. We will therefore not see any outpouring of grief even though Biden is continuing the policy of American establishment. When it comes to Israel, there is no real choice between an Obama, a Trump or a Biden. If the liberal Americans were as conscientious as they want to project themselves, they should have really been rallying now in defence of Palestinians. But of course, that is not going to happen.

In the meantime, there is no stopping Israel from pummelling the lives of Palestinians. The one-sided use of force continues as the world looks on with studied apathy. The continued eviction of Palestinians from their homes goes on unabated. Jewish settlers are simply walking into these homes and making them their own. Most of these grabbers are Jews from New York looking for a second or a third home in the ‘promised land’. In the process, they are divesting Palestinians of the only home they have ever known. The non-humanity of the Palestinians can be gleaned from the fact that it is they who are forced to pay the legal fee of these criminal settlers. There are a number of US based organizations, most of them registered as non-profit, who are facilitating this land grab. But certainly, now that Trump is gone, this is not an issue that will even remotely disturb liberal Americans.

The liberal prevarication to condemn the brutalities of Israel without in the same breath also condemning Hamas is also representative of their skin-deep understanding of the issue. First of all, such a false equivalence is largely designed to tell us that the Palestinian misery is partly of their own making. Secondly, they are trying to create a camouflage to argue that there are two parties in this ‘conflict’ whereas in reality there is only one party which has been calling the shots since the very beginning. And that party is the state of Israel, backed by Americans and guilt-ridden Europeans. The Palestinians have merely been adjusting to whatever Israel has been doing to them.

The righteous umbrage over Hamas’ use of rockets is entirely misplaced. It is as if those rockets constitute the entirety of violence. What gets deliberately overlooked is that the state of Israel itself is the first act of violence. As if one rocket fire by Hamas is enough to negate the systematic violence that the Palestinians have been experiencing through decades. What can be more violent than being dispossessed of your own homes, alienated from your history and memory?

The liberals even pretend of not knowing how Hamas was helped by Israel during its initial years. It is a travesty to think that Hamas arose to fight the Israeli occupation. If that was the case, then it should have helped the Palestine Liberation Organization which was spearheading the intifada. Instead, by its own admission, Hamas arose to counter Fatah, the strongest faction within the PLO led by Arafat. The Hamas leader, Sheikh Yasin, before he was assassinated by Israelis, made it clear that the arms it was stockpiling was to fight the PLO and not the state of Israel. After finishing the staunchly secular Fatah in Gaza, Hamas became the sole representative of Palestinians which only helped the Israeli righteous discourse of fighting against the scourge of Islamic terrorism. If today Hamas is haunting Israel, it is because Israel wanted it that way. It was difficult to fight the PLO morally; with Hamas at the helm, the killing of Palestinians can continue without any remorse.

And for the liberals all over, it is easier to talk about Israel and Hamas in the same breath, while treating the lives of Palestinians as collateral damage.