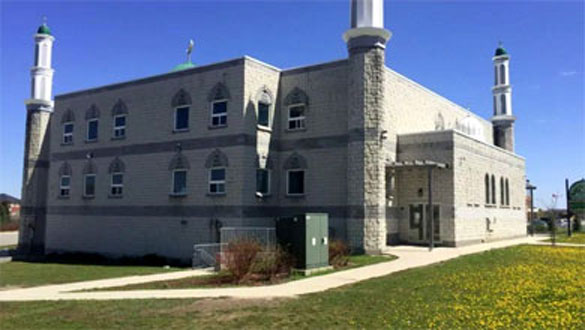 Brampton's Jamiat Al Ansar, pictured here, has cancelled all prayers and programs until further notice. But a group of imams is concerned that some Toronto-area mosques have refused to shut their doors. (Jamiat Ul Ansar)

A group of Ontario imams and Islamic scholars are fighting an uphill battle to convince management at a handful of Toronto-area mosques to completely shutter their doors.

Group of imams disappointed worshippers are still gathering, despite calls for people to stay home

A group of Ontario imams and Islamic scholars is fighting an uphill battle to convince management at a handful of Toronto-area mosques to completely shutter their doors.

They say that while a majority of mosques are closed — some a whole week before Premier Doug Ford declared a province-wide state of emergency on March 17 — a few insist on remaining open.

The imams believe the refusal to close the mosques exposes an allegiance to certain foreign scholars not heeding the calls, and in the process endangering Canadian lives.

"We hate to see mosques shuttered, but our religion teaches us that we have an obligation to save lives and preserve people's health," said Zahir Bacchus, imam at Brampton's Jamiat Al Ansar and a prominent member of the Canadian Council of Imams (CCI).

"The COVID-19 pandemic has put Muslims in uncharted territory," he said. "We've asked Muslims to pray at home, pray with their families and loved ones — just don't come to the mosque," he said.

"The majority of the people who worship at my mosque have accepted our decision; there has been almost no objection."

But until Tuesday, Brampton's Makki Masjid was open for five daily prayers, including the Friday congregational prayers.

In a message to its members, the mosque administration said on its website that it will limit the number of worshippers to 50.

"If you arrive when more than 45 people have filled the parking lot, stay in your car and patiently wait until next jumu'a," the statement reads. Jumu'a is the Arabic term for Friday congregational prayers.

'A Loophole In The Law'

An imam at Makki Masjid, too fearful to be named, refused to support management's decision. CBC News is not identifying him because he feared reprisals for speaking out.

"I don't believe they comprehend the gravity of the spread of the pandemic," the imam said. "Makki's management held three or more prayers last Friday without the support of their Imams, believing that 50 is a loophole in the law."

Late into the evening of March 24, the Makki mosque in Brampton announced that it was suspending all activities. Since then, CBC News has received information that another half-dozen mosque across the GTA were still open for regular services.

In a letter posted to the city's website, de Villa called social distancing "absolutely critical," saying that most places of worship, a space of two metres from other members would "not be practical."

"I am asking you to consider other options to provide support," de Villa wrote in the letter.

Still, in Brampton, the AlSalam mosque is also open, pledging to restrict the number of worshippers to 50.

On a normal Friday there would be just one congregational prayer.

One imam told CBC News that when worshippers showed up last Friday at a Scarborough-area mosque and found it closed, they retreated to their apartment buildings where they turned party rooms into prayer halls.

Meanwhile, Toronto-based imam Ibrahim Hindy posted the following message on his Facebook page on March 19 about an unregulated prayer hall, called a musallah.

"I was told by a trusted source that a Musallah in the GTA had two CONFIRMED cases of COVID-19. The MPP in the area called the Musallah and they agreed to shut down. But a few days later, they reopened.

"This is pure negligence that lacks both deen (religion) and intellect."

CBC News has not independently verified the two alleged cases or at which prayer hall they may have been located.

In an email to CBC News, another imam said, "In East Scarborough, there are 6 to 7 Musallahs alone in apartment buildings and in Thorncliffe and Flemingdon where an equal number exists, they are all open." CBC News has agreed to withhold the imam's name because of his concerns about possible reprisals for speaking out.

When the Islamic Institute of Toronto (IIT) in the city's east-end decided to shut its doors on March 13, it based the decision on the opinion of its resident scholar, Ahmad Kutty.

Imam Kutty called on Ontario mosques to close down, arguing that the Prophet Muhammad established the principle of quarantine by separating those afflicted with a communicable disease from the healthy.

He wrote that "during the prayer itself, people stand in close proximity, shoulder to shoulder, breathing out onto the carpet during prostration, which then another person will touch and breathe in."

On March 16, the Canadian Council of Imams called on mosques in Ontario to suspend all activities.

Professor Ingrid Mattson, the Chair of Islamic Studies at Huron University College at Western University in London and former president of the Islamic Society of North America, pleaded with Muslims to adhere to social distancing recommendations.

Refusing to change one’s behaviour when circumstances change is not piety but defiance to the One who changed those circumstances.

"Don't worry about the masajid (mosques)," she wrote. "The angels are filling the rows."

But the imam at Makki mosque in Brampton told CBC News that management at his mosque don't care "two cents" about the opinion of Canadian scholars.

"They're taking their religious orders from scholars residing in New Delhi, India, not from reputable Canadian Imams," he said.

"And the scholars in India have instructed them not to close down their mosques until there is an order to do so."

"I've seen a video message with my own eyes from a cleric in New Delhi which who said that a Muslim is never impure and therefore it is impossible for a Muslim to impart an impurity to another Muslim," he said.

"How can we preserve life when this sort of nonsense is being promoted in our community? There is nothing we can do about it."

Original Headline:  Practicing Islam in the time of COVID-19