Mosques Built On Sectarian Lines Are Not Approved By The Quran

Mosque Built By Hypocrites Is Mentioned In The Quran

1.    Quran does not approve of mosques built on sectarian lines.

2.    Mosques should not be used for discussing sectarian issues.

3.    Preachers should discuss only Islamic issues before Friday prayers. 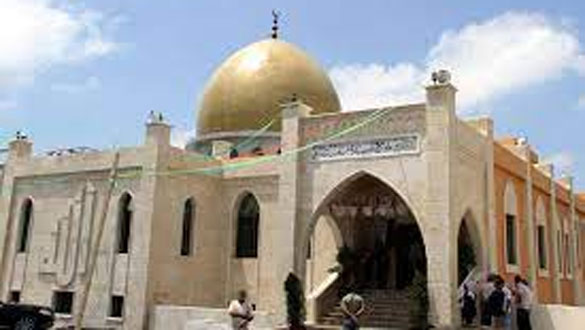 Still the mosques have been made the centres of sectarian difference which the Quran condemns.

The Quran strongly condemns sectarian differences in some verses and so mosques built on sectarian beliefs are not approved by the Quran. There is a verse in the Quran on mosques based on sectarian lines.

There are also those ˹hypocrites˺ who set up a mosque ˹only˺ to cause harm, promote disbelief, divide the believers, and as a base for those who had previously fought against Allah and His Messenger.1 They will definitely swear, “We intended nothing but good,” but Allah bears witness that they are surely liars.

Do not ˹O Prophet˺ ever pray in it. Certainly, a mosque founded on righteousness from the first day is more worthy of your prayers. In it are men who love to be purified.1 And Allah loves those who purify themselves. Which is better: those who laid the foundation of their building on the fear and pleasure of Allah, or those who did so on the edge of a crumbling cliff that tumbled down with them into the Fire of Hell? And Allah does not guide the wrongdoing people.

The building which they erected will never cease to fuel hypocrisy in their hearts until their hearts are torn apart. And Allah is All-Knowing, All-Wise.(Tawbah:107-110)

Therefore, this incident serves as an example for future generations when similar mosques built with the purpose of dividing the Muslims will come into existence. Such mosques will always remain a centre of differences and divisions among the Muslims.

Mosques are meant for worship of God. In the mosques, only the name of God is remembered and no other matter is discussed there. Sectarian differences or ideological differences are not allowed to be discussed in mosques. So restricting the entry of other sects in a mosque is against the spirit of the Quran. It is seen that the preachers and imams of such mosques discuss sectarian issues and foment sectarian differences among the Muslims. This is also un-Islamic. Muslims should take a lesson from the mosque of the hypocrites built during the prophet’s life which is condemned by the Quran. Mosques should not be made the centers of sectarian differences.

During the life of the holy prophet pbuh, mosques served as the centres of Islamic life. They were not only places of worship but also centres of learning and all the religious issues were discussed there. The holy prophet pbuh used to make all the important announcements from the pulpit of the mosque and used the pulpit of the mosque for the moral, spiritual and intellectual development of the Muslims. Mosques also served as maktab where people learned to read and write from the educated Muslims.

However, today mosques have become centres of sectarian practices. Imams and preachers make lectures that are mostly based on sectarian beliefs and bias. Some preachers use inflammatory remarks against other sects which fuel sectarian hatred among the Muslims.

In European countries mosques are used by preachers associated with the extremist groups for promoting religious and sectarian hatred. Salafist and Wahhabi preachers trained and educated in the Gulf states are strategically posted there for promoting their extremist ideology that spreads hatred against non-Muslims and against the People of the Book. These preachers also promote rebellion against the European governments that provided citizenship and religious rights to the emigrant Muslims. They declare the European governments the enemies of Islam and Muslims which is against the principles of the Quran as it preaches peaceful living with the community with which Muslims have some kind of treaty.

Due to all this, mosques have lost their purpose and significance in the Muslim society. Some European countries have begun to see mosques with suspicion due to extremist preachers and have imposed restrictions on their construction. The French government has closed hundreds of mosques and has conducted inquiry into the affairs of mosques in the country.

Today, mosques are not used for pure Islamic purposes and for the moral, spiritual and intellectual development of the Muslims. They are mainly used for offering Friday prayers. Only a handful of Muslims offer five time prayers and so the functioning of mosques goes in the hand of a few people who are not aware of the true teachings of Islam and importance of mosques. They are only used for promoting a particular sectarian ideology and so in some places fights between the followers of opposing sects occur in the mosques for its control.

Thanks to all this, the general Muslims are also not aware of the place of mosques in an Islamic society. They have also accepted the fact that mosques are based on sectarian beliefs as the preachers and imams openly preach sectarian beliefs.

Mosques can reclaim their lost glory only when they are cleaned from sectarian bias and all the members of sects consider it a place for Islamic worship and a centre of Islamic life. Sectarian differences have nothing to do with mosques as the prayers of all the sects are the same.

Mosques should be made centres of learning Islamic teachings. The committees of mosques should comprise educated people from the Muslim society who possess deep knowledge of the Quran and hadith and understand the Islamic principles of liberal thinking. Today mosques are spacious and grand with high minarets but very few people visit mosques for regular prayers. Crores or rupees are spent on the construction of huge mosques with decorated minarets but the true message of Islam is not spread from there. What is preached and spread is sectarian hatred by the preachers of most of the mosques. This needs to be stopped if the mosques are to be made of centres of Islamic life and learning.