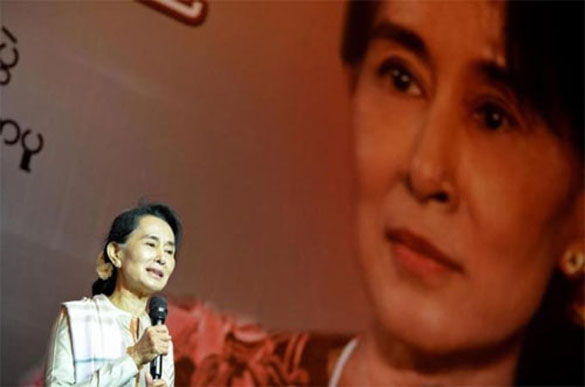 Rohingya refugees who fled violence in Myanmar have dismissed leader Aung San Suu Kyi's stated concern over their plight, as activists accused her government of "burying their heads in the sand" over violence tearing through Rakhine state.

In a sprawling and squalid camp on the Bangladesh-Myanmar border, Rohingya refugees on Tuesday rejected Aung San Suu Kyi's claim that many members of their minority group were safe in Myanmar and said her vow to repatriate displaced Rohingya carried no weight.

"Suu Kyi is a traitor. We can't rely on her words," said Sultan Ahmed, who arrived in Cox's Bazar in Bangladesh along with hundreds of thousands of refugees two weeks ago.

The 80-year-old told Al Jazeera that he did not believe the de facto leader would act on her words because "everything is run and decided by the army".

Aung San Suu Kyi "is only a name there. Nobody cares about her," he said.

The Nobel Peace Prize laureate has faced fierce international criticism for saying little about the abuses faced by the Rohingya.

She broke her silence on Tuesday, condemning "all human rights violations" in Rakhine State, and vowing to take action against those who commit abuses.

However, she failed to comment on the military offensive that sent more than 420,000 Rohingya pouring across the border into Bangladesh, an operation the UN has branded as "ethnic cleansing".

Abdul Hafiz, a Rohingya man in Kutupalong, was angered by Aung San Suu Kyi's implication that Rohingya were themselves responsible for their plight.

Aung San Suu Kyi had said more than half of Rohingya villages were not affected by the violence, and invited diplomats and observers to visit those villages so they could learn why Buddhists and Muslims "are not at each other's throats in these particular areas".

"Let them see the plight of the people there," Hafiz told the Associated Press news agency.

"They have kept people in confinement. Let the world media know from them whether we are tortured or living in joy."

But he told Al Jazeera he was ready to return to his village if her government would "ensure peace, our safety and return of our property".

Human rights groups were sceptical too, criticising Aung San Suu Kyi for failing to condemn the army's alleged abuses, as well as her claim that army operations had ceased on September 5.

"While it was positive to hear Aung San Suu Kyi condemn human rights violations in Rakhine state, she is still silent about the role of the security forces," Amnesty said in a statement.

"Aung San Suu Kyi today demonstrated that she and her government are still burying their heads in the sand over the horrors unfolding in Rakhine State," the rights group said.

"At times, her speech amounted to little more than a mix of untruths and victim blaming."

Phil Robertson of Human Rights Watch, referring to Aung San Suu Kyi's assertion that military operations had ended, asked: "If that is true, then who is burning all the villages we've seen in the past two weeks?"

He said satellite images showed about half of all Rohingya villages had been torched and it was time that Aung San Suu Kyi, the government and the military faced the fact that the security forces "don't follow a code of conduct and shoot and kill who they want".

It was likely to provide the military with "genuine solace and certainty that she will not call on them to stop what they are doing," he told Al Jazeera from Melbourne.

Meanwhile, foreign diplomats who were present in Naypyidaw as she gave her speech gave an overall positive reaction to her address.

Mohammad Sufiur Rahman, Bangladesh's ambassador to Myanmar, said: "I simply say one thing, that whatever she said is encouraging and we have to implement that in the right spirit."

US Deputy Assistant Secretary of State Patrick Murphy also attended the address but did not comment.