Why Salman Khurshid is Wrong in Equating Hindutva with Islamist Terror

2.    Hindutva is confined to national boundaries which is an anathema to Islamist terror groups.

3.    Islamist violence is primarily directed at Muslims while the victims of Hindu right-wing violence are religious minorities.

4.    Are Muslims supposed to forget the pre-2014 violence against them because it was committed by the Congress party? 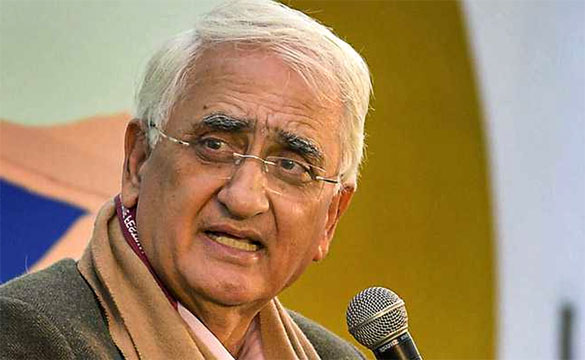 Salman Khurshid, the Congress leader landed himself in controversy after the publication of his book ‘Sunrise over Ayodhya: Nationhood in our Times’. In a small portion of the book, he compares a ‘robust version of Hindutva’ with Islamist terror groups like ISIS and Boko Haram. While some in his own party have supported him, many inside and outside have opposed him for this comparison. The Hindu right-wing groups have demanded banning of the book and have indulged in arson; targeting one of his houses in the hills.

If someone else had made this comparison, one would not have seen this level of consternation. But Salman Khurshid is a Muslim, and hence this comparison was bound to stoke a controversy. May be, he should have been more measured but what if he himself wanted to generate such a controversy?

But despite the brouhaha that has been generated, it is fair to ask if Salman Khurshid was right in his comparison. Even if he did not take the name of the RSS, he certainly meant that certain strains of Hindutva are similar in their violent proclivities as some of the heinous Islamist terror groups. Certainly, we have seen in multiple riots and state-controlled pogroms that the Hindu right-wing has committed revolting violence, particularly on Muslim women. From being stripped and paraded to their wombs slit, cases of deranged yet premeditated violence are all part of documentation. Men have similarly been killed in extremely heinous fashion. On the other hand, Islamist groups like the ISIS and Boko Haram have indulged in kidnapping, rape, torture, sex slavery and many other atrocities, especially on the women of religious minorities or those who they have declared beyond the pale of Islam.

One can keep arguing that one kind of violence is different from the other. That the brutality of Boko Haram is more pugnacious than that committed by the Hindu right wing. But for the Yazidis and Muslims and especially their women, who have suffered at the hands of such brutes, these differences simply do not have any value. Any violence leaves a permanent scar on the psyche and any attempt to get into the semantics of ‘type of violence’ is not just pointless but also bereft of any empathy for the victims of such violence.

But beyond the effects of the violence, it needs to said that there are fundamental differences between Islamism and Hindutva of whatever variety. First of all, Islamist violence primarily draws its inspiration from religious scriptures. Whether it is ISIS, Boko Haram or the Taliban, they all derive their legitimacy from within the Islamic tradition, relying primarily on religious teachings. Hindutva, on the other hand, is primarily political in its orientation. Hindu right-wing groups treat other communities as insufficiently socialized in the national culture and therefore perceives them as a threat. No doubt this understanding is faulty as there is no singular way to belong to the national culture but it is important to distinguish that the motivations of Islamist and Hindu right-wing violence comes from very different sources.

Secondly, Hindutva is confined to national boundary but Islamist terrorism does not recognize any such boundaries. Rather, Islamist terror groups understand these boundaries against the teachings of the Quran and hence makes all possible efforts to obliterate them.

More importantly, Islamist violence is primarily directed at those Muslims who do not subscribe to their ideology. Thus, Sunni militancy in Pakistan and other places primarily targets the Shia who are deemed as heretic in their eyes. Despite the numerous terror incidents which have targeted and killed non-Muslims, the data is clear that most victims of Islamist violence have been Muslims themselves. The same cannot be said with regard to the violence enacted by the Hindu right wing groups which are primarily and solely directed towards religious minorities.

In perhaps deliberately conflating the two, Salman Khurshid might have ensured higher sales for his book. With his party in the wilderness and without a clue as to how to negotiate its way back to power, Salman Khurshid might have thought that a little controversy might help him. And it certainly did with no less that Rahul Gandhi coming out with a video distinguishing between Hinduism and Hindutva. Essentially, he gave the same formulation as that of Khurshid: arguing that Hinduism is a lofty religious philosophy while Hindutva is a pernicious political ideology of hate, otherness and violence.

Even this formulation is problematic to say the least. Granted that Hinduism is one of the most sophisticated religious philosophies but as some Dalit intellectuals have pointed out, the whole edifice of this religion was based on the suppression of oppression of multitudes of lower caste people. How does one convince an Ambedkar about the greatness of Hinduism when he states that this religion has been responsible for the undignified existence of lower castes and women?

It is not just that Salman Khurshid is wrong in equating Hindutva with Islamist terror, he might be equally mistaken about the fundamental difference between Hinduism and Hindutva.

It is also very important to ask some hard questions to Salman Khurshid. History is amply clear that anti-minority violence in this country hasn’t been inaugurated with the coming to power of the BJP. The whole effort of Khurshid and his ilk is to whitewash the crimes of Congress regimes before 2014 which saw the brutalization of Muslims in many parts of the country. The important question to ask Khurshid is whether all that pre-2014 was also done by Hindutva forces? Or is it that Muslims and other minorities are supposed to forget such crimes because they were committed by a so- called secular party?