1.       Mohibullah was a true representative of the Rohingyas.

4.       He had documented the atrocities of the Myanmar Army against the Rohingyas. 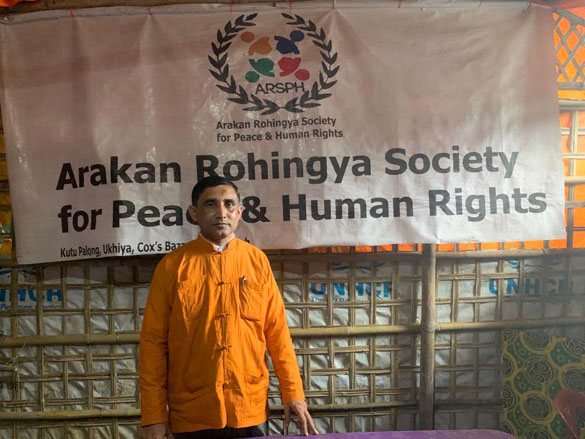 Wielding another blow to the struggle of above a million Rohingya Muslims for a peaceful repatriation to Myanmar, gunmen shot the popular Rohingya leader Mohibullah dead in his Cox Bazar office in Bangladesh on 29th September. The assailants had come to discuss with him some issues but at the end of the meeting, they shot him dead. The assailants have been identified as Abdur Raheem, Rashid and Lalu.

Mohibullah was the head of Arakan Rohingya Society for Peace and Human Rights and was accepted by the Rohingyas as their leader. He had documented the atrocities of the Myanmar against the Rohingyas and was a vocal leader fighting for the repatriation of Rohingyas internationally. He had been getting death threats for his work.

His assassination evoked wide condemnation from Human Rights organizations like Human Rights Watch, Fortify Rights and Amnesty International. They all demanded the arrest and punishment to the assailants and protection of Rohingyas from the criminals and subversive elements.

Mohibullah had fled Myanmar in 2017 along with other members of Rohingya community after the Myanmar military crackdown. He belonged to the Langchada village of Mungdu area. He had taken shelter in Cox Bazar’s Ukhia refugee camp.

South Asia Director of Human Rights Watch expressed deep grief over his killing and said,’ “Mohibullah was a vital voice for the Rohingya who had already suffered unimaginable loss and pain when they arrived as refugees in Bangladesh,” Meenakshi Ganguly, South Asia director at HRW said in an emailed statement. “He always defended the rights of the Rohingya to safe and dignified returns and to have a say in the decisions concerning their lives and future. His killing is a stark demonstration of the risks faced by those in the camps who speak up for freedom and against violence. Mohibullah’s death undermines not only the struggle of Rohingya refugees for greater rights and protection in the refugee camps, but also their efforts to safely return to their homes in Myanmar. Bangladesh authorities should urgently investigate Mohibullah’s killing along with other attacks on Rohingya”

She also criticized Bangladesh government for harassing its critics for a long time. In a way she indirectly held Sheikh Hasina government for Mohibullah’s murder.

Mohibullah had met the US President Donald Trump in 2019 and had sought his help in Rohingyas’ return to their homeland. In August he had organized a huge rally in Bangladesh in which more than 2 lakh Rohingyas had participated.

In a twitter message, Fortify Rights, Representative Mathew Smith expressed grief at the murder of Mohibullah and demanded justice to him.

Devastating news of the murder of Rohingya human rights leader Mohib Ullah in Kutupalong refugee camp in Bangladesh today. We grieve with all who knew and loved him. Fortify Rights demands justice in this case and protection for the many others at heightened risk of violence.<

Murder, arson and threats are not new in Bangladesh’s Rohingya refugee camps. Drug lords, extortionists and terrorist groups are active in these camps. They kill those Rohingya leaders or religious leaders who oppose their drug and extortion racket. Bangladesh government has not been able to contain these elements who cross over the river to Myanmar after such operations. The assailants are said to be the members of Rohingya extremist organisation Al Yakeen. Such dubious organisations claiming to be the well-wishers of Rohingyas are active in refugee camps. One of them is Arakan Rohingya Salvation Army. ARSA is involved in drug and extortion. These organisations have caused damage to the Rohingyas’ struggle for repatriation because of their violent and terrorist ideology.

Mohibullah’s killing seems to be a work of those forces that do not want repatriation of Rohingyas and the assailants seem to be the agents of the enemies of the Rohingyas.