Protest This Time Is Not Faith-Based, Muslims Are Protesting For the Imperilled Constitution

Until a month ago, the words secularism, justice, liberty, equality and fraternity seemed to be just that: Words, devoid of much meaning, locked up in the pages of a book few had read. Today, these words have come to life, are chanted daily on the streets and Maidans of cities, towns and villages by millions of Indians. “We the People of India”, cutting across caste, community, gender and language, are collectively reading the Preamble, reiterating the pledge of our freedom fighters. The Constitution of India is now a Book of the People.

Between them, three sharply contrasting images from three different moments in India, post-Independence, encapsulate a promising trajectory of Indian Muslims. 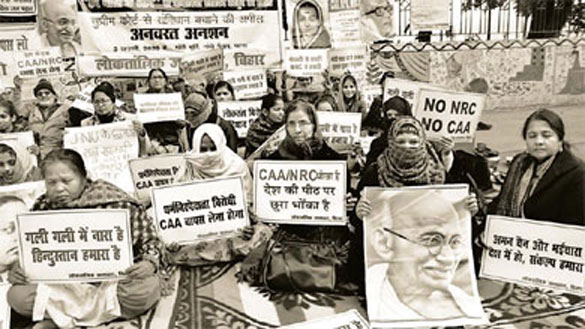 The difference between then and now is striking in more ways than one. One, in 1985 and in 2018, the rallies were launched from above. But this time, the Muslim masses are out in the public space in defiance of the diktats of their big-shot ulema. Following an apparent prompt from the mighty ruling duo, Ahmad Bukhari (Imam, Delhi’s Shahi Jama Masjid), Maulana Mahmood Madani (general secretary, Jamiat-ul-ulema Hind), Sayed Zainul Hussain Chisti (Dewan, Ajmer Dargah), Kalbe Jawad (Shia leader) and their ilk ask Muslims to stay at home, telling them they had nothing to fear from the CAA-NPR-NRC process. But no one is listening. As yesterday’s led take over today’s leadership, the ulema are forced to make a quick U-turn, fall in line behind the Muslim masses.

Two, the protest this time is not faith-based, there is no gender segregation. Muslim men and women are out there alongside all others. Yes, there are Muslim women in Burqas and Hijabs. But also there in large numbers are women who “don’t look like Muslims”.

Three, the icons of the ongoing insurrection are mostly women. Examples are the three young students standing rock-like, fingers wagging, between the baton-wielding police, and a male fellow student close to the Jamia Millia Islamia campus. And the aged “Dabang Dadi Ammas”, along with a young Muslim woman, her 20-day-old infant in her arms, occupying Shaheen Bagh in New Delhi.

Last, and most significantly, unlike the earlier two occasions, there’s no “Islam/Shariah in danger” call. It’s all about “citizenship in danger”. There is no question of any conflict here between Deen (Faith) and Dastoor (Constitution). The Aam Muslim is well aware that in the Dastoor lies the guarantee of their right to citizenship, which is the key to all other rights. That is why both She and He are wholeheartedly part of the campaign to “Save the Constitution”.

Many in recent years had bemoaned the fact that the word secularism stands drained of any emotive appeal. Rejoice now in this moment of secular awakening. But Muslims and their well-wishers must also beware of the dissonant Islamist undercurrent that sees in this moment of churning a great opportunity for cadre recruitment. Among the protesters are also Islamists who have no faith in any “ungodly” secular-democratic dispensation. If the Sangh Parivar is bent on turning secular India into a Hindu Rashtra, the Islamists continue to harbour the fantasy of a Shariah-based Islamic Caliphate in India and across the globe.

In August 2014, the online portal New Age Islam (NAI) published a translation of two editorials dated August 22 and August 25 published in the Jamaat-e-Islami, Hind (JEI’s) Urdu mouthpiece, Dawat. Among other things, one of the editorials stated: “It is very necessary to welcome the announcement of the establishment of Islamic Caliphate by the ISIS because Islamic Caliphate is the aspiration of every Muslim and there has never been a disagreement on the issue among the Muslims in any period of history.” The JEI, incidentally, was not the only Muslim body in India to have expressed similar sentiments until the sheer barbarism of the ISIS stunned them into silence.

Even today, you could go talk to any member of the JEI, the Welfare Party (JEI’s electoral wing), or the Students Islamic Organisation (JEI’s student wing). Better still, do a Google search and read the constitution of the JEI online. Further to the right of the JEI, there is the Popular Front of India (PFI) or its electoral wing, the Social Democratic Party of India (SDPI).

No one can, or should, deny the democratic right of non-Jihadi Islamist organisations to protest against the CAA-NPR-NRC process. But liberals and leftists who should, and do, defend the rights of the targeted Muslim minority must beware, lest they end up providing credibility and strength to the Muslim Right. Especially so when the Muslim masses are learning in real time that, contrary to what the Islamists claim, Islam and secularism can happily co-exist.

Original Headline: Muslims are protesting not because their religion is in danger, but for the imperilled Constitution