The remarkable presence of Muslims in anti-CAA protests throughout India is a powerful, symbolic, and strategic assertion that counters aggressive Hindutva. It also signals the birth of a new ‘inclusive nationalism’ in India.

Although this new, mass Muslim politics has not yet found any concrete formal shape, the violent and even brutal reaction of the Narendra Modi government towards Muslim protesters is itself a sign of its increasing political significance.

This assertion comes after six years of near-silence of Indian Muslims in the face of a sustained propaganda to demonise the community. They didn’t react because they couldn’t re-imagine and flesh out the exact nature of the new Muslim political identity.

Triple Talaq and Babri Masjid had already lost their symbolic potentials for Muslims. But the new citizenship issue is different. It is linked to the very foundation of their political, and indeed social, existence. This has provoked them to assert themselves as Indians as well as Muslims – and thereby proposing a new inclusive definition of nationalism.

But there are four new factors that are shaping this new Muslim politics and its stake in nationalism. 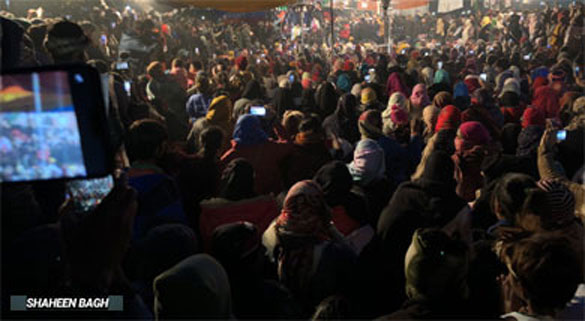 The Muslim protesters, it seems, draw inspiration from grassroots politics and people’s movements (such as those against displacement, or by Dalit/Adivasis, or farmers’ agitations) in two significant ways. First, they identify the Constitution as a legitimate political source to assert their citizenship status. The Constitution’s liberal values, especially the Preamble, are creatively interpreted to question the disruptive agenda of the government.

Second, the Muslim protesters try hard to present the anti-CAA protest as a non-party political agitation. This conscious move helps them get rid of the established BJP versus Congress framework, and allows them to accommodate leaders such as Yogendra Yadav of Swaraj Abhiyan, Chandrashekhar Azad of Bhim Army, and Kanhaiya Kumar of Communist Party of India (CPI). In this sense, there is an attempt to give the anti-CAA movement an inclusive political character.

A Believable Idea of India

Hindutva politics does not become the sole reference point for the Muslim protesters. They certainly reject the Hindutva-driven discourse of nationalism that has been the main intellectual source behind the CAA. But they do not want to reduce everything to Hindutva politics. Instead, they seem to question the reliability of the framework that has produced and mainstreamed the communal, anti-Muslim stereotypes in the last six years.

The findings of the CSDS-NES survey 2019 are very relevant to elaborate on this point. An overwhelming majority of respondents support the argument that India does not belong only to Hindus. In fact, nearly 75 per cent Hindus reject the Hindutva propaganda that India is a natural Hindu homeland. On the other hand, only 6 per cent Muslims appear to have lost faith in the secular promise made by India’s Constitution. It shows that the media-driven Hindutva discourse cannot influence the fundamental political beliefs of common Indian citizens.

The national symbols — the national anthem, the national flag, and even the Constitution — are not merely seen as intellectual resources by these Muslim protesters. They also use them as symbols of protest.

This creative reinterpretation of national symbols is a relatively new phenomenon in Indian politics. The anti-corruption movement of 2011 was the first major political event when the official national symbols were recognised as legitimate sources of political agitation.

The Muslim protesters, however, have expanded the scope of this symbolism, and by doing so, they have also staked their claim in inclusive nationalism. The photographs of B.R. Ambedkar and M.K. Gandhi are placed side by side along with the copy of the Constitution; religious texts — Bhagavad Gita, Quran, Bible, and Guru Granth Sahib — are recited; havan is organised for communal harmony; and the national anthem is sung on the stairs of the historic Jama Masjid in Delhi.

This creative re-articulating of symbolic nationalism takes us beyond the given imaginations of Muslim political identity. The Muslim community, which is often treated as religiously inward-looking and politically untrustworthy (or siyasi), is reasserting its Muslim-ness as an inseparable part of the Indian identity. And precisely for this reason, creating a binary between Islamic belief and patriotism of Muslims is a communal, anti-national agenda.

The refined idea of political representation is the fourth important source of this new Muslim assertiveness. The protesters are not led by any particular Muslim organisation or individual. It is true that the All-India Majlis-e-Ittehadul Muslimeen (AIMIM) has been organising a number of protests against the CAA, and Muslim religious bodies such as Jamiat-Ulama-e-Hind are also very critical of this law. But these established Muslim organisations have not been given any formal recognition by the protesters so far for two obvious reasons.

First, Muslim protesters do not want to make the CAA a ‘Muslim issue’. They describe the anti-Muslim character of the CAA/NRC as an ‘attack on the spirit of the Constitution’ to expand the scope of this agitation. Second, they are also keen on redefining the idea of representation — “who represents Muslims?”

The presence of Chandrashekhar Azad holding a copy of the Constitution with B.R. Ambedkar’s photo on it at Jama Masjid (a mosque otherwise known for its Shahi Imam’s fatwa politics) and Kanhaiya Kumar’s Azadi song at Shaheen Bagh underlines this new definition of Muslim political representation. Muslim protesters have made it clear that their political anxieties need not be represented exclusively by Muslim politicians.

No one knows the fate of the anti-CAA movement. But it is certain that this new Muslim assertiveness will continue to redefine the meanings of inclusive nationalism in the future.

Hilal Ahmed is a Fellow at the Nantes Institute of Advanced Studies, France (2019-2020) and Associate Professor, CSDS, New Delhi. Views are personal.

Original Headline: Who represents India’s Muslims? Thanks to CAA protests, we now know the answer