The Quranic Concept of Interfaith Harmony and Universal Brotherhood

1.    The Quran espouses an idea of universal brotherhood, inter-community cohesion and inter-faith dialogue in clear, spirited and unequivocal terms.

2.    Islam has ordained Muslims to engage in an interreligious dialogue to restore peace and strengthen communal harmony in a multi-religious and multi-cultural society like India.

3.    The blessed days of Ramazan provide us an abundant opportunity to help build inter-community cohesion for peace and resilience against violence, religious extremism and communal hatred. 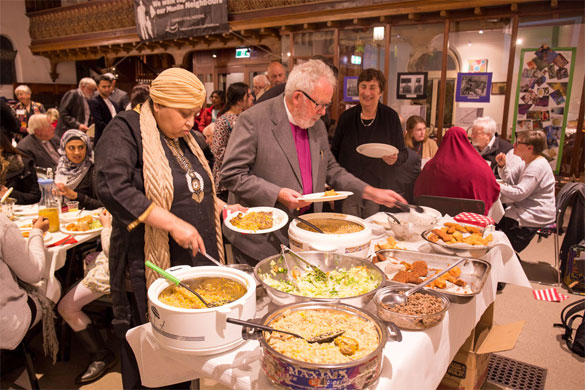 The Quran espouses an idea of universal brotherhood, inter-community cohesion and inter-faith dialogue in clear, spirited and unequivocal terms. In fact, the principle of Universalism is deeply enshrined in the essential message of Islam based on the Quranic approach to inter-faith dialogue which calls for wide embrace for mankind, universal brotherhood, acceptance and large-heartedness. Numerous verses in the Quran exhort dialogue and reconciliation among different faith traditions and religious communities such as:

“(O Glorious Messenger!) Invite towards the path of your Lord with wisdom and fair exhortation, and hold discourse with them in the finest manner” (16:125)

“And, (O believers,) do not argue with the People of the Book but in a suitable and decent way, except those of them who did injustice. And say (to them): ‘We believe in that (Book) which has been revealed to us and which was sent down to you, and our God and your God is but One and we obey Him alone” (29:46)

Thus, the Holy Quran lays great emphasis on the dialogical concept of Mujadla Hasanah (fair exhortation and discourse with other people in the finest manner). This makes it patently clear that Islam has ordained Muslims to engage in an interreligious dialogue to restore peace and strengthen communal harmony in a multi-religious and multi-cultural society like India.

The ongoing holy month of Ramazan offers us an opportune time for self-reappraisal and an honest introspection on our current social and religious predicaments. If we look around, the current communal tension and increasing polarization in our society leaves us bewildered and deeply disappointed. An atmosphere of dismay and all-round gloom has been created by the saddening news emanating from various parts of the country.

However, the blessed days of Ramazan provide us an abundant opportunity to help build inter-community cohesion for peace and resilience against violence, religious extremism and communal hatred. It’s about time to bring together people from all faith traditions to revive our shared heritage of peace and legacy of love. One such harmonious occasion would be an interfaith Iftar program aimed at fostering peace and dialogue.

Ramazan is a month in which over one billion Muslims all over the world share great joy and gusto every year.  They celebrate it because it “is the (month) in which was sent down the Qur’an,”- a message from the beloved God to each and every Muslim.”

The Interfaith Iftars are held consecutively on every marked day of Ramazan particularly for groups of people who represent different faith communities. It is indeed gratifying to take part in such auspicious occasions in which scholars, learned people, writers and theologians from all faith traditions are invited to elaborate the principals of fasting in their respective creeds. Muslims, Hindus, Christians, Sikhs and people of various other faiths— get together and share their views on interfaith relations with a special reference to the essence of fasting in Islam and other religions.

Given the paramount significance of fasting in Islam, Ramazan is not only meant for Muslims to inform their non-Muslim counterparts in the country about the Islamic concept of fasting but also to learn and understand their beliefs and views pertaining to their religions.

An authority on Vedas and Bhagwad Gita, Dr M. M. Verma who authored the famous book, “A Dialogue with Truth” wrote that fasting in Islam is not only refraining from food and drink but also guarding the ears, eyes, tongue, hands and feet together from evils. He elaborated the Islamic notions about the fast of hand, fast of tongue, fast of eyes, fast of ears and the fast of feet. He stated that Islamic fasting transforms a common man into a godly man and enhances his character, putting a halt to the baser human instincts of pride, haughtiness, jealousy and ambition.

Thus, clearly, the holy month of Ramazan is a great opportunity for spiritual renewal. Nevertheless, merely abstaining from eating, drinking and intimate relations from sunrise to sunset is not the complete essence of Ramazan. It is rather a time for inner reflection, devotion to God, self-control, and self-training to be a better and more humane person. Therefore, Ramazan is not only a religious month but also a social occasion.

Hunger teaches humility.  Fasting gives one the opportunity to put himself in the shoes of the hungry.  This empathy not only encourages, but also imposes generosity.  Islam expects its adherents to be humble, generous and hospitable.  The teaching of Ramazan turns Muslims into more generous, more hospitable, humbler, friendlier and more eager to charity works.

It is a great tradition of Ramazan that Muslims invite one another and friends from other faith traditions to break the fast together by sharing their food and friendliness and thus communicating around the table of friendship and dialogue. The purpose behind extending the Iftar invitation to leaders of various faith traditions is that it will pave the way for a long-lasting friendship not only among the faith leaders but also among the different communities they represent. They are in dire need of such inter-community understanding and interfaith friendship today.  The nation needs this kind of lasting friendship to restore communal harmony and peace.  It needs the cooperation and mutual understanding of the members of different communities and religions. 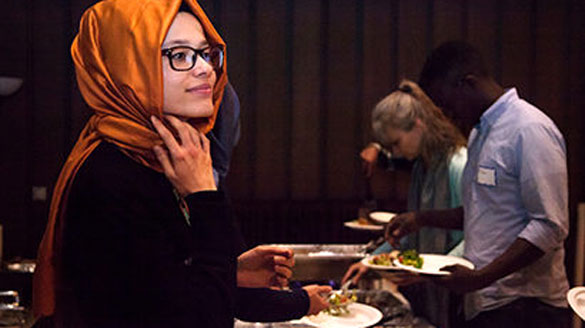 Believing in a particular faith does not and should not prevent its adherents from simultaneously adopting certain universal values that benefit the humanity as a whole.  It is possible to find common values and references that appeal to the members of all faiths while still acknowledging the variety of beliefs and practices.  In fact, we prove this by the very act of coming together around these tables today.  I am confident that our togetherness will produce remarkable opportunities for a society rooted in common values and perhaps, for a more peaceful world.

Misunderstandings are the main causes of conflicts among the members of different belief systems. Had all people come together and learned about each other, they would have realized that they share incomparably more similarities than differences. Interfaith Iftars, therefore, seek to promote intercultural and interfaith dialogue to create an environment where people will have the opportunity and motivation to exchange ideas and information about various cultures and belief systems.

Fasting has been a universal practice in many religions and within both Eastern and Western societies. Abstinence from eating food or drinking water has been observed for a variety of purposes, some of them being spiritual purification, repentance, mourning, sacrifice, atonement of sins and enhancement of knowledge and power. Today, fasting is also used as a treatment in Naturopathy as well as Ayurveda. Modern medical sciences have proved multiple health benefits gained from fasting.

There’s an essence of fasting in all faith traditions. In Islam, the ultimate objective of fasting, as enunciated in the Quran, is Taqwa (God-consciousness and righteousness). The Quranic injunction is very clear in its fundamental objective of enjoining fasts upon Muslims. It says: “O ye who believe! Fasting is prescribed to you as it was prescribed to those before you, that ye may become righteous (achieve Taqwa).” (2:183). Thus, the essence of fasting in Ramazan is Taqwa, or righteousness, which Muslims are required to observe throughout the whole blessed month of Ramazan and onward.