Murderous Sectarianism in Islam: Salafi Ulema Should Not Only Condemn the Massacre at Lal Shahbaz Qalandar Shrine but Also the Ideology behind It

The massacre of over a hundred devotees at Sufi shrine of Jhule Lal Shahbaz Qalandar at Sehwan in Sindh, Pakistan is neither the first such incident nor is it going to be the last. There are condemnations galore from Muslims of all hues including Salafi-Wahhabis. The general secretary of Indian Jamiat Ahl-e-Hadith, Maulana Asghar Ali Imam Mehdi Salafi, for instance, has condemned the incident in the strongest terms.

However, the problem is that contrary to all evidence Salafi-Wahhabis refuse to accept that it is their own theology that has created an environment in which such regular massacres have become possible. Indeed, the entire establishment and expansion of Wahhabism as a force to reckon with has been based on mass murders and destruction of shrines from early 19th century onwards.

Wahhabi vandalism started in 1802 when an army of 12,000 Najdi Salafi warriors called Ikhwan attacked Shia holy sites in the city of Karbala, slaying 4,000 of that city's inhabitants. In 1803 they attacked Makkah but the Makkans, having known the fate of Karbala, surrendered to Saudi Wahhabi rule. The Wahhabi Ikhwan then smashed Sufi shrines and the graves of even the closest companions of the Prophet. In Madina, they not only destroyed common grave-sites, but even attacked the tomb of Prophet Mohammed (pbuh). 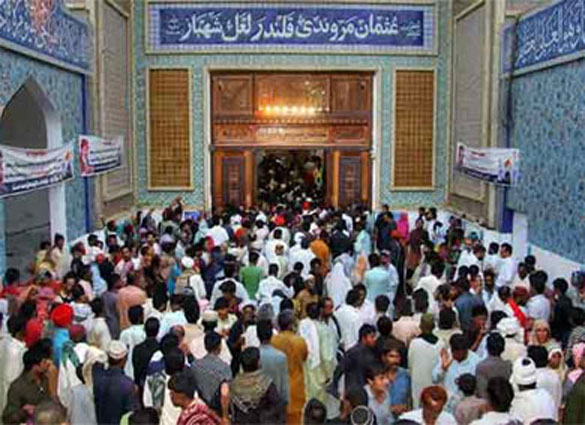 Since then the history of Islam has been a history of massacres of non-Wahhabi Muslims and destruction of holy sites. Presently the banner of forcible Wahhabi expansion is taken up by al-Qaeda, ISIS, Taliban, Lashkar-e-Taiba, Lashkar-e-Jhangawi, Al-Shabab, Boko Haram, etc.

Muhammad ibn Abdul Wahhab (1703–1792), the founder of Saudi Arabia’s Wahhabi-Salafi creed declared all rationalist and mystic Muslims as mushrik or polytheists and thus “wajibul qatl” (deserving death). In a long discourse in Kashaful Shubhat, he explained why all Muslims despite their claim to believe in one God are polytheists whose lives and property are halal (permitted) for Wahhabi Muslims. He concluded his discourse: “… You now understand that these people's (non-Wahhabi Muslims’) accepting tauheed (oneness of God) does not make them Muslim; the fact that they expect intercession from others than God (Sufi saints) makes them liable to be killed and their property to be looted." ----- Kashaful Shubhat, p.9, Maktaba al-salafia bil Madina Munawwara, 1969 CE)

Another Abdul Wahhab quote necessary to understand the current conflict is the following: “Even if the Muslims abstain from shirk (polytheism) and are muwahhid (believer in oneness of God), their faith cannot be perfect unless they have enmity and hatred in their action and speech against non-Muslims (which for him includes all non-Wahhabi Muslims). (Majmua Al-Rasael Wal-Masael Al-Najdiah 4/291).

The problem with Indian Salafi ulema like Maulana Imam Mehdi Salafi is that while they condemn specific terrorist incidents, they do not denounce the Wahhabi-Salafi ideology that they actually follow. This is a self-contradictory stance. You denounce terrorism and follow the ideology from which it emanates. From the time of the Mohammad bin Abdul Wahhab - Muhammad bin Saud pact in 1744, Salafi-Wahhabis have been following this murderous ideology which calls all non-Wahhabi Muslims mushrik (polytheist) and Wajibul Qatl (deserving death).

If Ahl-e-Hadith and other Salafi Muslims are sincere in condemning sectarian terrorism they need to also denounce and renounce the Wahhabi-Salafi ideology that calls for murder, destruction and looting of property. They only need to do what Abdul Wahhab’s father and brother did. In fact, his brother Shaykh Sulayman ibn 'Abd al-Wahhab wrote a book refuting his arguments. Abdul Wahhab was able to propagate his ideas freely only when his father, a Qazi of the region, passed away.

Although Sufi-oriented Muslims, rationalists, Shias, etc have been a victim of Salafi-Wahhabi terrorism, it would be wrong to conclude that extremism is limited to Wahhabis. The recent murder of Pakistani Punjab’s Governor Salman Taseer and the deification of his Brailvi murderer by millions of Muslims shows that extremism is widespread across all sects of Islam. All Muslims who sincerely denounce terrorism need to introspect and brainstorm together how to weed out ideologies within Islam that lead to such massacres of Muslims and non-Muslims alike.

We also need to expose the hypocrites within Islam. There are people who denounce terrorism in public and teach in their madrasas that early peaceful and pluralistic verses of Quran have been abrogated by the later war-time verses asking us to kill the kafir and mushrik. Of course, war-time verses had come in a certain context which no longer exists and so these instructions can no longer apply to us. The first task before us is to come out of denial, accept that our theology and jurisprudence have been corrupted and then start thinking of changing our mindset, so that we can live as peaceful citizens of this inter-connected twenty-first century world.

This article appeared first in Mail Today on 21 February 2017.