Race is generally understood as a group of people or a population “related by common descent or heredity” like “physical characteristics, ancestry, historical affiliation, or shared culture”. Skin colour is one of such commonalities.

Muslims of all backgrounds pray during the 2019 Hajj, the annual pilgrimage to Mecca. Fethi Belaid/AFP via Getty Images

When such a commonality is believed and used as a yardstick to determine the superiority of one race over another in the formulation and maintenance of social or political relations, however, that may be called “racism”. Professor Powell (2008, p. 794) defines it as “the prejudiced belief that motivates a particular bad actor to discriminate against a particular victim.”

In today’s world, discrimination on any ground like race, language, or religion is nationally and internationally prohibited in the enjoyment of human rights. For example, Article 2 of the Universal Declaration of Human Rights, which has attained the status of customary international law, contains such a right of non-discrimination. It also declares a right to life, security, and freedom from torture (Articles 3 and 5).

National constitutions guarantee similar rights. To take the American example, Article XIV (14th Amendment) guarantees that no “State deprive any person of life, liberty, or property, without due process of law.” As such, American citizens regardless of colour, sex, religion or culture are entitled to equal treatment in the eye of law. America, of course, incorporated this right in the Constitution in 1868 by the 14th Amendment. Before this, black men did not even have any citizenship rights.

This reason for this discriminatory treatment was nothing but their colour, which is given by Allah. And as such, they were not at fault. The 14th Amendment of the American Constitution that granted black citizenship and hence equal rights status was a result of the 1861-1865 Civil War and the later Civil Rights Movement led by notable figures such as Martin Luther King Jr. and Malcolm X.

A very recent (25 May 2020) victim of such brutality is George Floyd, a 46-year-old resident of Minnesota. He was killed in police custody while unarmed (Haddad 2020). This incidence has given rise to uproars nationally and internationally.

Now, a question may be raised as to whether skin colour should be a criterion for treating people differently. This paper will answer this question from an Islamic viewpoint

The Holy Qur’an (4:1) says that the human race started their journey of life with their father, Adam (peace be upon him- PBUH) and his wife, Eve and that Allah created Adam (PBUH) from earth that was collected from various parts of the world.

In other words, Allah created him from a mixture of soil. The mixture was from hard, soft, black, red and white soil. Because the nature and types of soil were different, the children that came forth from Adam (PBUH) are also of various temperament, character and colour. That is why we see people of different colours and nature. Some people are black, some are white, and some are brown. In the same way, some people are rough and tough, some are soft and humble, some are good and some are bad. The following Hadith of the Holy Prophet (PBUH) gives us this truth in the following words:

“Indeed, Allah, the Most High, created Adam (upon him be peace) from a handful (of soil) which He took from the whole of the earth; so the children of Adam are in accordance with the earth: some of them are red, some white, some black, some a mixture (of them), and (again) some are simple, some rough, some bad and some good” (Tirmidhi Shareef Book 47, Hadith 3213).

Biological Process of the Creation of Humans

With the origin with Adam (PBUH), humans are born from the “mixed fluid” of their parents (Qur’an 76:2). The fluid passes a few stages over a period of time. It remains first at a clinging (‘alaqah) stage. Then, it turns into a chewed flesh (mudgah) with bones (‘izoma) growing. This is followed by flesh (lahm) that clothes the bones.

To quote the Qur’an (23:14), “We turned the thing that clings into a chewed lump of flesh and We turned the chewed flesh into bones and We clothed bones with intact flesh.” After 120 days of pregnancy, according to the Prophet (peace be upon him-PBUH), the foetus receives the soul (Sahih al-Bukhari 7454). The foetus develops over time and is born, when mature, as a human child.

From the above, we understand that it is Allah Who creates the human body with a particular skin color and puts a soul inside, and then sends him/her as a human to this world.

Allah sends humans for a limited period of time to this world for a test. And that is to see who worships Him and does all good actions (Qur’an 51:56 and 67:2). And life after death is the final destination. So, whatever we have in this life is not to be proud of. If a black person pleases Allah by good deeds, s/he will go to Paradise. On the other hand, if a white person fails to do so, s/he will fail in the afterlife.

That is why Allah says that He has created people with various colours, languages and races just for the signs of His greatness and also for their identification (and not for discrimination) (Qur’an 30:22 and 49:13). In other words, these things are not the standard of human superiority over one another nor can they make them dear with Allah. Nothing but piety can endear humans with Allah (Qur’an 49:13).

That is why the Holy Prophet (PBUH) says, “Verily Allah does not look to your faces and your wealth but He looks to your heart (your faith and love for Him) and to your deeds” (Muslim 2564c). 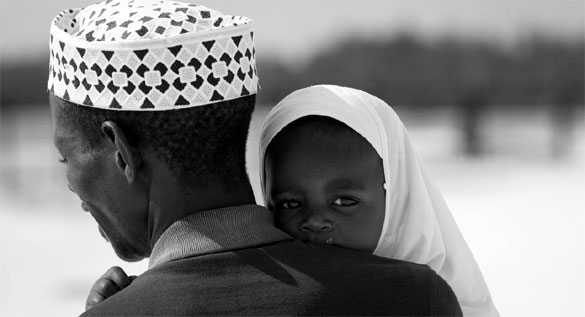 In his own life, the Holy Prophet (PBUH) set examples of how to treat people regardless of any racial identity. For instance, his adopted son, Zayed bin Harithah (Allah be pleased with him), was a black slave whom he freed and adopted as a son and let him live with him. He took Zayed as his companion on different occasions including his journey to Tayef where the Prophet was tortured and Zayed tried his best to shield him.

During his boyhood, Zayed’s father and uncle came to take him back home. The Prophet (PBUH) gave him an option to follow his father or remain with him. Zayed opted to stay with the Prophet (PBUH) saying, “How can I prefer anybody else to you? You are everybody for me, including my father and uncle” (Huzaifah n.d.). The Prophet appointed him the head of the army to fight Romans at Mu’ta. He laid down his life in that battle.

Zayed’s son, Usamah who was black by colour, was also a beloved one to the Prophet (PBUH). Most of his upbringing took place in his (Prophet’s) house with his contemporaries, Hassan and Hussain (Allah be pleased with both of them), the grandchildren of the Prophet (Muslim Matters 2015). The Prophet made Usamah the general of the Muslim army to fight the Romans. The army included all frontline Sahabas (Companions of the Prophet) from the Quraysh (Muslim Matters 2015). This was probably an unprecedented fact in human history.

Another glowing example was Bilal ibn Rabah (Allabe be pleased with him), who was a black slave. After his acceptance of Islam, he underwent untold sufferings at the hands of the disbelievers of Makkah, especially his own former master, Umayyah ibn Khlaf. The Prophet (PBUH) confided him with the positions of his private secretary, the minister of Bayt al-Mal (Treasury), and the first caller to prayer (Mu’azzin) (Momodu 2019). “Islam raised him to the status that one of the strongmen of like Omar bin Khattab addressed him as Saiyydana (our leader)” (Hijazi 2015).

From the foregoing, it is understood that all human beings are born free and equal. Their racial marks like white skin or black skin are distributed by Allah alone in the biological process of creation in which humans do not have any choice. And these marks are only for their identification and definitely not for discrimination.

So, taking pride in the racial marks is nothing but ignorance because actually all humans have the same origin, namely a drop of mixed liquid from father and mother (Qur’an 86:5), which was not a thing worth mentioning (Qur’an 76:1). The only way they can excel one another is being good servants of the One Who created them, namely Allah, by having faith in Him and obeying His Commands.

Mankind was clearly reminded of this truth by the last Prophet, Muhammad (PBUH), in his parting advice (his last pilgrimage sermon) in the following words:

“O people, your Lord is one and your father Adam (Peace be upon Him) is one. There is no virtue of an Arab over a foreigner, (non-Arab) nor a foreigner (non-Arab) over an Arab, and neither white over black nor black over white, except by righteousness” (Musnad Ahmad 22978).

And this advice of the Prophet (PBUH) has been entrenched in Article 1 of the Cairo Declaration of Human Rights in Islam 1990 as follows:

(a) All human beings form one family whose members are united by their subordination to Allah and descent from Adam. All men are equal in terms of basic human dignity and basic obligations and responsibilities, without any discrimination on the basis of race, colour, language, belief, sex, religion, political affiliation, social status or other considerations. The true religion is the guarantee for enhancing such dignity along the path to human integrity.

(b) All human beings are Allah’s subjects, and the most loved by Him are those who are most beneficial to His subjects, and no one has superiority over another except on the basis of piety and good deeds.

An acclaimed scholar of international business and Islamic law, Dr Md (Muhammad) Anowar Zahid is a Professor and the Dean of the Faculty of Law, Eastern University, Dhaka, Bangladesh. With the degrees of PhD (Manchester, England), LLM (Dalhousie, Canada) and LLB (Honours) & LLM (Dhaka University), he has extensive teaching and research experiences both at home and abroad (Canada, Malaysia and UK). Immediately before joining the Eastern University, Professor Zahid was the Director of the Centre for International Law and Siyar (CILAS) and an Associate Professor at the Faculty of Law, National University of Malaysia (Universiti Kebangsaan Malaysia-UKM).