Spread of Separatism of Muslims in World Community

Separatism is not a new phenomenon. People over the ages have struggled to be separate from the dominant community of a country for many reasons, to maintain their identity based on any of the factors such as religious, cultural, ethnicity and a few others. Often persecution on any one of these factors was also the reason.

In modern times the surge, a huge influx of immigrants into Europe; mostly from the ex-colonies of European Colonial nations and lately, in particular from Middle Eastern conflict regions has created the situation in Europe quite different from the initial, government controlled and managed intake of migrants there.

The separatism demonstrated by the Muslim migrants all over the western world is presenting a mix of reasons for their demand for separate identity in these countries of their adoption; reasons including the political events taking place in their home countries whence most have escaped or migrated. It is a complex mix and impossible situation to attempt to analyze in some logical meaningful way.

In the context of Muslims however, the demand for separate identity either at home or in foreign lands, is made irrationally and referred to the code Book Quran that they claim to be their principle guiding source. However the Book has this to say:

4:171- O people of the Book transgress not the limits in your Deen- the Code, nor say of God aught but the truth.

5:80- Say “O people of the Book, transgress not the limits in your Deen, trespassing beyond the Truth, nor follow the vain desires of people who had wronged in the past – who misled many and strayed from the even way.

Here separateness is referred to in terms of the claim made in the name of ‘Islam’ where ever Muslims are in majority in their own country or in minority in other countries where ghettos are established, as is the case in many European cities where Muslim-ness is displayed in an exaggerated form. This is pointed out because this trend is not general found in other religious communities, which have no or little problem in integrating with the main stream society.

People of other communities and religions can hardly be distinguished in public areas by their dress mode—sometimes the exception being the turbaned Sikhs, but one can spot a religious Muslim, man or woman stand out like sore thumb.

If this sore thumb causes, as it often does, a ‘confrontation’ resulting in consequential retaliation by the community facing them, and the government of the day proclaiming legislation to restrict or ‘ban’ outright such exaggerated displays of separateness; then a din is raised of human rights violation, restriction on freedom of religious practices, freedom of expression and harassment among others.

Transgression of limits in all norms of human behaviour, wrapped up in religious cloak to give it divine authority has become an effective tool in the hands of the religious masters to manipulate their gullible followers to carry out their agendas.

One such example is the event that occurred recently in Jakarta Indonesia. During the election of the governor, a Hijabi woman was shown on TV news saying that she was “a Muslim and therefore I must vote for a Muslim”. The bigotry and prejudice against a Christian, not to forget the excesses of the religion shone through brightly! The election was won and lost purely on the basis of the candidates’ religions. The difference that was manipulated and exploited to the hilt by the Muslim religious commanders and the foot soldiers obeyed in the name of Islam.

It seems that ‘all is fair’ therefore in the love of winning a war for ones agendas, even if it means flaunting in the name of their religion.

The phrase ‘all is fair in love and war’ was used in the novel the “Euphues: The Anatomy of Wit”. It could be taken as a satirical statement if one so wishes to demonstrate that when infatuation takes hold, a person loses all faculties of reason and balance of judgement. Such seems to be the case in most Muslim countries where religious passion—infatuation with religion-- has sapped faculties of reason of people who as followers of edicts of so called religious masters carry out their programs, robot fashion in submission.

In this context it is worthy to note and give credit to the nation of Indonesia for its founding motto; a great example of maturity and humanity. 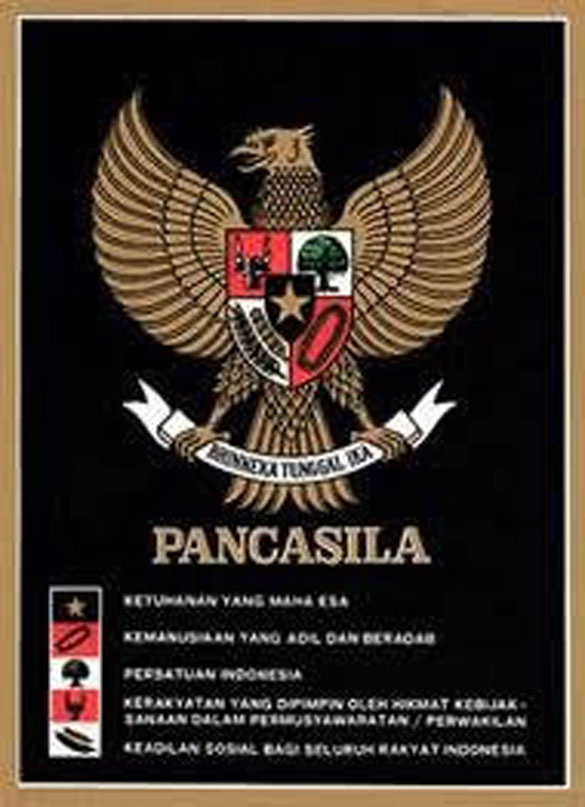 The motto: Bhinneka Tungal Ika—Unity in Diversity as shown in this poster however was lost in the ignorance of the foot soldiers during the election; lost to them was the big picture of consequences of their actions. Harmony and peace of the nation was lost and schism created among the people of the Book, Christian and Muslim!

Not very different to what is happening worldwide!

Pancasila is given as nation’s Five Principles; a code that it has adopted for itself: 1) A divinity that is an ultimate Unity- in one God, 2) a just and civilized humanity, 3) the national Unity, 4) democracy predicated on wisdom and deliberation, 5) social justice for all Indonesian people.

Such wise mature principles should be adopted by all nations; but particularly the rest of Muslim countries where today they are guilty of such over the top and inhuman religious laws that have put them at the top of human right abusers list and hated nations! Laws such as blasphemy, triple divorce, restriction of religious practices and persecution of minorities and many more are common place accusations!

In conjunction with transgression and excesses committed in the name of religion, even if Islam is referred to as being a religion in English language, the derogatory and sarcastic phrase that is used in the Book for people making such overt display of religiosity is “showiness”- Uraaoon - to attract attention to themselves and is therefore abject hypocrisy:

Religious teacher with worry-beads in hand walks to mosque- people think he is God-conscious holy person!

All forms of transgressions exceeding the limits of “good behaviour” in the community diminish mankind and are therefore abhorred by the Book. The warning given in the above referred verse 5:80 is about the blind and sheep-like following of those who with phony holiness mislead their followers.

Muslims as well as others have a responsibility put on them by the Book to be responsible and carry their own burden of reaction to their actions in a balanced way for ‘goodness sake” and not create confrontation and disharmony – Fitna- in the world so that mankind progresses to develop on the ‘right and even path’.

How many times a day do Muslims pray to God for that?

One hopes, at least in this month of Ramadan God has granted them their wish. But how could He? They had listened to the complete recital of the Kitaab, made parrot-fashion and so without understanding what they were asking for!