What Have Indian Muslims Gained From The Anti-Blasphemy Protests?

Ordinary Muslims Have Paid The Price Of Their Self-Seeking Leadership

1.    The protests should have stopped after the government took action against its spokespersons.

2.    The Arabs do not sympathize with the existential anxieties which the Indian Muslim community is facing today.

3.    The Muslim leadership instead of educating the masses, fanned the narrative of blasphemy.

4.    Ultimately it is the common Muslims who suffers the brunt of state action. 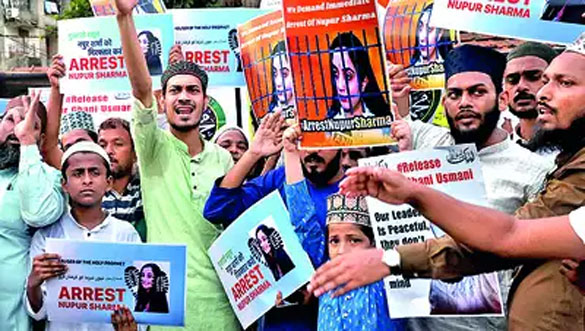 Photo: The Times of India

The so-called anti-blasphemy protests, following the uncharitable remarks of ex-BJP spokesperson, Nupur Sharma, on the prophet of Islam, has now more or less subsided. What had escalated matters was the highly inflammatory, provocative and reprehensible remarks by another BJP spokesman Navin Jindal in a tweet in the middle of protests against Sharma, putting more fuel in the fire. Muslim anger had grown when it came out that Nupur Sharma had tried to say the same things against the Prophet in two other channels before Times Now anchor Navika Kumar allowed that. The anchors of News 24 had stopped her soon after she started her diatribe in the 7 to 8 pM show the same day, and so did the anchor of Republic Bharat, after she had just completed one sentence, in the 8 to 9 PM show.

It became clear after these revelations that Sharma was well-prepared and determined to provoke Muslims on that evening's widely-watched prime time shows. And that it was no heat of the moment statement, as she claimed later.

However, it is perhaps time for Indian Muslims to think about what these protests achieved? And whether this was the right way to get their issue addressed? Should they have fallen in the trap?

First and foremost, it is important to underline that the ruling government was on the back foot after an international outcry over the so-called blasphemous remarks by its spokespersons. It had to suspend Sharma till further enquiry and expel Navin Jindal from the primary membership of the party. (In several non-BJP ruled states, complaints and FIRs were lodged against her.) For a party which takes its no-compromise image seriously, this was indeed a climb-down. It was even more embarrassing because it were Muslim governments which had forced the government to call its own national spokespersons as the ‘fringe,’ angering its own cadre which has since come out strongly in suppirt of Sharma and Jindal.

The protests nevertheless did not stop. Perhaps emboldened by their ‘victory’, ‘Muslim leadership’ at various places stuck with their demand to arrest Nupur Sharma and Navin Jindal. Certainly, Islamic countries did take notice but only in defence of the Arabian Prophet.

If at all the idea behind such a move was to put a spotlight on what is happening everyday with Muslims in India, it did not serve the purpose. For it is foolish to think that these Islamic countries are not aware of the pitiable state of Muslims in India. They very well know what is happening in India as they are aware of what China is doing to its Muslims. But they have chosen to remain silent and this has been their policy for years now.

The Arabs especially are not concerned with the plight of Muslims for they do not consider the non-Arabs as of equal status. The Arab-Ajam divide runs deep wherein the Ajam (non-Arab) only exists to serve the needs of the Arabs. The Arab world got mobilized simply because of the issue of perceived insult to the Prophet Muhammad (an Arab). No sooner had the government of India clarified the issue and apologized, the matter came to an end for all these Muslims nations.

Also Read:   The Moral Lessons to Be Learnt From Nupur Sharma Episode

Indian Muslims completely misread the situation and continued to protest and agitate over the issue, now without the support of Muslim nations. The message from the so-called Islamic nations was very clear: we are not concerned with the loss of lives and limbs of Indian Muslims; the government can deal with them as they please. The message to the Indian government was also very clear. They understood what the ‘new red line’ was. And they proceeded to teach a collective lesson to Muslims by mass arrests, demolition of homes and even direct shooting in places like Ranchi.

After all, foreign governments are loathe to comment on what is perceived as internal matter of any country, unless of course there are other considerations involved. Indian Muslims had a high moral ground and when the BJP had taken action against the spokespersons, the matter should have ended there. But then, like in other instances, Indian Muslims squandered the opportunity and the result is for all of us to see.

It is unfortunate that when it comes to the issue of blasphemy, we hardly see any difference between the articulation of educated Muslims and the average Mullah on the street. As if Muslims have a special right to get hurt, calls to avenge the insult of the Prophet were echoed from all quarters. The only difference was whether it should be avenged by getting her arrested or asking her to be hanged. 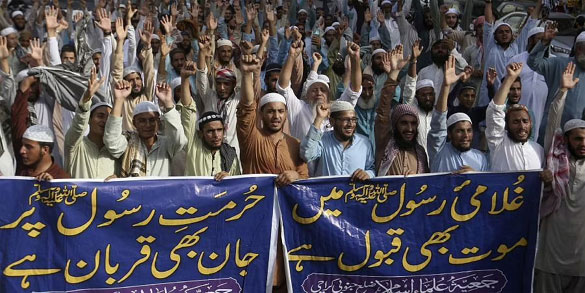 In normal circumstances, the more educated section within the community is expected to persuade the common populace to see things rationally rather than emotionally. Alas, the educated Indian Muslim sees itself in no such role and in instances like these acts in an even more belligerent fashion.

We have seen the development of an active yet misguided group of Muslim activists who have no regard for what the consequences of their mindless action would entail. Most of these activists are privileged and hence their entitlement blinds them to the sufferings of ordinary Muslims. After all, it is the ordinary Muslims whose vegetable carts gets tossed away, whose houses are demolished and who are routinely picked up by the police on mere alleged suspicion. Exceptions apart, these activists, who seek to represent the whole of Muslim community, come from the numerically small section of upper caste Muslims. This class and caste of Muslims, have led the entire community to its present state of subjugation and marginalization by having political priorities which have scant regard for the living conditions of majority of Muslims in this country.

Also Read:   Nupur Sharma Only Stated What is written in Hadith; Why Are Muslims So Upset?

Rather than educating the community on the irrelevance of issues like blasphemy, they have instrumentally fanned this narrative as a result of which ordinary Muslims are suffering today. If these activists truly have Muslim interest at their heart, then they need to pause and think what is more important: protecting Muslim lives and property or getting bytes and inches in the international media.

The low caste mother of the young teen, Mudassir, slain by police bullet in Ranchi has no other alternative but to proclaim to the world that her son has become a martyr. She is too poor to fight a legal battle against the police. And she knows very well that none of the civil society actors will stand by her for long. Her only hope is to immerse herself completely within an Islamic worldview and draw comfort, solace and social capital from it. Her tears have the power to rupture the many settled narratives in this country: police brutality and their absolute communalization which have been pointed out in various reports. But such issues can only be raised through a language of citizenship and belonging.

Alas, for our activists as well as the state, her sole identity is that of a Muslim. She is emblematic of the larger Muslim community that remains fixed and frozen between an othering state and an otherising self-seeking narrow minded elite.

Arshad Alam is a regular contributor to NewAgeIslam.com.