Nupur Sharma Only Stated What is Written in Hadith; Why Are Muslims So Upset?

If She Is Guilty Of Blasphemy, Then That Makes Bukhari the Original Blasphemer

1.    The BJP’s spokesperson statement on the Quran and Prophet Muhammad have riled a section of Muslims.

2.    Muslims have filed multiple FIRs against her in different states.

3.    Some have accused her of blasphemy and have raised provocative slogans.

4.    This attitude does not help Muslims. They need to redefine parts of their theology to suit the present times. Otherwise, such questions will be repeatedly asked of them. 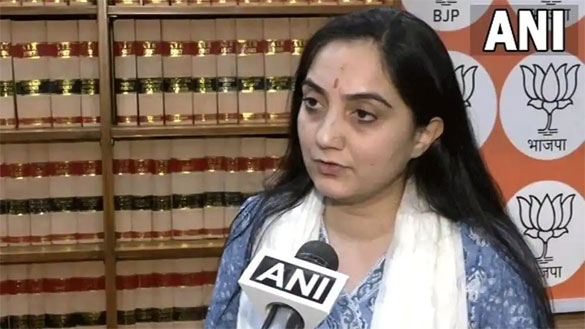 A section of Muslims are incensed about the statement of BJP’s spokesperson Nupur Sharma over the course of a television debate. The video grab shows her derisively stating even she can make fun of Islam. She then proceeds to tell her opponent, Taslim Rahmani, that in his religion, horses fly (a reference to the Buraq, on which the Muslim Prophet reportedly flew to heaven), that according to the Quran, the earth is flat and that the Prophet married a young girl of six and consummated it when she turned nine. It is this last remark about the Prophet which has landed Nupur Sharma in trouble. FIR has been filed against her in some states for hurting the religious sentiments of Muslims. She has also claimed that she is now receiving death and rape threats over the social media for her statement on the Prophet. Muslims believe that anything slanderous against the Prophet constitutes blasphemy and it is a stated position in Islam that it is a crime punishable with death. One is not surprised that even someone like Nupur Sharma, who has the backing of the most powerful party in the country, should feel worried and vulnerable.

There is some merit in saying that perhaps she should have tempered her arguments. The communal situation in the country has markedly deteriorated, thanks in part to such statements made on public television. Moreover, as a spokesperson of the ruling party, she should have acted more responsibly and showed restraint even if she had been provoked. But considering that Muslims have been hurt by her statement, there should have been a better way to register their protest. They could have issued statements stating what their position on the whole issue is. By filing multiple FIRs, issuing hate threats on social media, they are only proclaiming their intolerance to the whole world. Their angst is not just directed at Nupur Sharma, but also towards those (Muslims and Hindus) who have suggested caution and patience while dealing with the issue. One Abdul Rahman, president of the students’ union of Shibli College in Azamgarh is heard telling a crowd that when it comes to protecting the honor of the Prophet, Muslims will not hesitate to trample the heads of crores of Hindus under their feet. The crowd is seen chanting Gustakh E Rasool Ki Ek Hi Saza; Sar Tan Se Juda, Sar Tan Se Juda which would loosely translate as a call to behead anyone who speaks ill of the Prophet. Such reactions are bound to be counter-productive whose brunt will be borne by ordinary Muslims of the country.

But more importantly though, we need to talk about the nature of ‘Muslim hurt’. Has Nupur Sharma said something which is false or unknown to Muslims? Or is it that Muslims do not want certain things to be discussed at all about their religion? The The age of Ayesha, the last wife of the prophet has been the subject of some unease amongst Muslims. Some have opined that she got married at the age of nine, others have variously put her age at 11 or 16 or 19. Those who are arguing that she got married after attaining maturity (like Javed Ahmad Ghamdi) are basically doing so under modernist pressure. But Hadith writers like Bukhari were under no obligation to do so. They are clear that Ayesha got married to the Prophet when she was six and that he consummated the marriage when she turned nine. So, if Muslims are arguing that Nupur Sharma committed an act of blasphemy, then they should also say that the first blasphemer in this context was Bukhari himself.

Muslims have elevated Hadith almost to the status of scripture, although the fact remains that their collection started two and a half centuries after the death of the Prophet. It is easy for any Muslim to argue that these Hadith collection are more fables than reality. But then they have tied themselves in knots by pointing out the stringent and meticulous method of collecting these traditions. They are themselves embarrassed by some of the Hadith in various collections but do not have the courage to boldly discard them. And when someone points out to them these inconvenient facts, instead of arguing rationally, they normally either leave the debate or start saying that their feelings have been hurt. Nupur Sharma only said what is written in our religious literature, she did not fabricate anything. Are the Muslims hurt because she is not a Muslim or are they hurt and angry because they do not have an answer to such barbs?

I think it is the latter; Nupur’s Hindu identity has nothing to do with. Even if a Muslim would have pointed it out, the result would have been the same. Recently, there was an Indian TV debate between some ex-Muslims and Islamic scholars. In this debate also, we saw the same prevarication on the part of the so-called Islamic scholars who were unable to answer the questions raised by ex-Muslims. And that’s precisely the problem. Islamic scholars and Muslims in general do not have answers to certain questions which will be raised time and time again. Not just the age of Ayesha, but certain verses of the Quran which advocate violence on the unbeliever, etc. have been raised by Muslim reformist themselves. But instead of having a dispassionate discussion, the orthodoxy has stymied any such debate and have seen to it that the reformists either shut up or are exiled.

Also Read:  Was the Prophet exempted from normal sexual rules of conduct for Muslims as alleged by Islamic Apocrypha? Logical and Biological Refutation of the Right Hand Possession

And because they cannot answer certain questions; Muslims think that it is best to raise the bogey of hurt and victimhood. This is not going to solve the problems that they are confronted with. Moreover, Muslims themselves are not following what some of Islamic scriptures are telling them to. For example, the Islamic law is clear that there is no harm in marrying girls of young age. But today, no single Muslim would want to marry their daughter who is still a child. So there already is a gulf between the scripture and practices within the community. This leads to a certain dissonance in the thinking of average Muslim. The only way to resolve this is to clearly state that certain aspects of the scripture have become outmoded and no longer apply in the present context. If Muslims find the courage to do so, the likes of Nupur Sharma would have no ground to cast any aspersion on the Muslim religion.