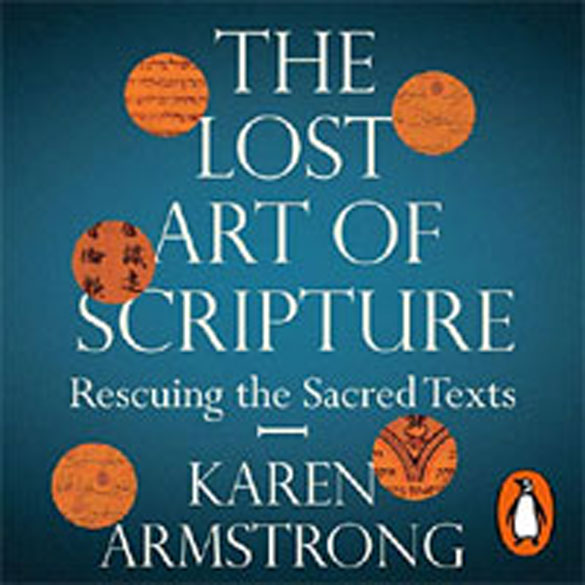 We usually think of scripture as a written text, part of a closed canon, as sacrosanct, as literal truth. But for author Karen Armstrong, who, at 75, is an ambassador for the United Nations Alliance of Civilizations, this misconception is why we have “current difficulties with religion.” That is, people today either take religion too literally or dismiss it altogether. Hoping to rectify this misunderstanding, Armstrong in her latest book ambitiously presents the story of how the world’s scriptures were produced and developed. Instead of trying to make scripture say what we want, using it to promote division and intolerance, she thinks we should look at scripture’s “ambiguity as being more expressive of the complexity of the human dilemma,” and understand scriptures as evolving works of art that facilitate transcendence and moral transformation.

The introduction and conclusion of “The Lost Art of Scripture” have the tone of a manifesto, but this hefty work is otherwise a panoramic tour of religious history. In it, Armstrong does not deeply explore any single scripture. There is no exegesis nor any original ideas — she’s a scholar but not an academic. She repeatedly refers to scripture as an art form. And despite the book’s title, she doesn’t satisfactorily explain why the art is “lost” or the sacred texts need “rescuing.” But Armstrong is an exceptional storyteller, and “The Lost Art of Scripture” is an amazing story. It is, admirably, a compendium of religious philosophy.

She begins by retreading material from her previous books, particularly “A History of God,” tracing the development of the Hebrew Bible, unpacking and nitpicking as she goes. From Israel she jumps to India for the origins of the Vedas, and then over to China for the earliest scriptures, in the modern sense of written sacred texts: oracle bones. Among this roaming history, Armstrong occasionally stresses that scripture was not meant to be read “with eyes passing swiftly over a written page” but that “its message had somehow to be ingested, inscribed on the heart and mind, and fused with the depths of one’s being.” Through rituals combining music and body movement, scripture enabled participants to embody tradition — to entextualise themselves. In this way, scripture yielded not only transcendence but moral transformation.

Cycling through Israel, India and China, Armstrong traces the scriptural revolutions that reflected the “major social, political and economic transformation” in the 6th century B.C. There was Ezra, Confucius and the Upanishads. Then there was Mencius, Mahavira, Laozi and the Buddha — as he is portrayed in both the Pali Canon and the innovative Mahayana sutras, which may be the world’s first fan fiction. About midway through the book, Armstrong gets to the Gospels, which she aptly calls midrash, “weaving scriptural verses together to create a story that injected meaning and hope into the perplexing present.” With meticulous sections on Talmudists, neo-Confucians, medieval theologians and Kabbalists, Armstrong continues the story through the Great Awakening, Hasidism and the rise of modern fundamentalism — easily the most misguided religious development in the book.

In several sections, she contextualizes the aggressive tendencies of Islam, explaining that in the Quran, “jihad is chiefly associated not with warfare but with non-violent resistance,” as the “struggle” for spiritual surrender. Each violent Surah of the Quran, she argues, was written during the early Muslims’ struggle for survival, and they were mostly ignored until the modern era, when colonialism provoked a violent backlash that needed religious justification. Significantly, Armstrong does not have similar apologetic explanations for any other scripture. Rather than Islam, Armstrong — a former Catholic nun — saves her criticism for Protestantism. She thinks we took a wrong turn at the Reformation, with its emphasis on the written word divorced from ritual — on literalism at the expense of metaphor. Armstrong condemns the Reformation as “a resurgence of the left hemisphere of the brain,” and if there’s a unique slant in her book, it’s her attempt to screen religious history through a neurobiological lens.

“Neurologists have discovered that the right hemisphere of the brain is essential to the creation of poetry, music and religion,” she writes in the introduction. This discovery enables her to write that “in India the recitation of mantra is used to achieve the transition from the wordy, analytic left hemisphere of the brain to a deeper and more intuitive form of consciousness.” She also asserts that the God of the Bible “could not be known cognitively in the manner of the brain’s left hemisphere; this perception requires the holistic vision of the right in which good and evil may be fused in some indescribable way.” There are about a dozen similar lines scattered throughout the book.

Yet this appeal to neuroscience comes off as rather simplistic. For one thing, scripture is about the mind, not the brain, and Armstrong hardly gives the mind a mention — maybe because neuroscientists know so little about it. Also, by filtering scriptural understanding through this right-brain/left-brain prism, she falls into the same trap she condemns: trying to understand religion rationally.

Perhaps she’s trying to appeal to sceptics, but even Armstrong admits that such an approach is misconceived. As she writes near the end, science and scripture “are chalk and cheese and to apply the disciplines of one to the other can lead only to confusion.”

Armstrong’s mission to spread compassion through understanding is certainly laudable. But despite being extensively researched and lucidly written, the aims and means of “The Lost Art of Scripture” are unfortunately confused.

Randy Rosenthal has a master’s in theological studies from Harvard University, where he teaches writing.

Original Headline: The art and ambiguity of the world’s scriptures