Rumi’s Message Of Love And Pluralism Is Relevant Even Today

1.    Rumi’s Mathnavi is the greatest treatise on Sufism.

2.    Rumi held the view that all the beings have emerged from the same Divine Principle.

3.    Love was central to his poetic and philosophical message.

Rumi is one of the greatest poet philosophers of all times. His thoughts and philosophy had great impact on the poetic and political thinking of the modern times. He was a great Sufi, an Islamic jurist and a great poet of Persian and had good command over Turkish and Arabic. His masterpiece called Mathnavi is in six volumes and is regarded as one of the greatest poetic masterpieces of Persian language.

Rumi is better known as a Sufi and one of the great proponents of the philosophy of Wahdat ul Wajood (Monism). He believed that man did not have an independent existence but was the part of the existence of the Supreme Being. He sang about the humanity and saw the presence of God in each human being and so he held the view that every human being felt the urge to return to Him. In fact, like the Vedantists, Rumi also believers that all the beings have emerged from the same Divine Principle and so even the matter is divine to him. Rumi also believed in the truth of all the religions and believed that all the religions lead man to the same goal, the realization of God. All the religions were only the means to reach Him. The essence of Rumi’s poetic and philosophical thinking is love. Without love, man cannot achieve God’s realization. It is Love that drives the universe and it is love that has been holding the universe together. Therefore, Rumi’s ideas and philosophy is very much relevant in the present multicultural society in which followers of different religions live and follow their own religious beliefs.

A World-View That Brings Out A Spiritual Perspective On Universe 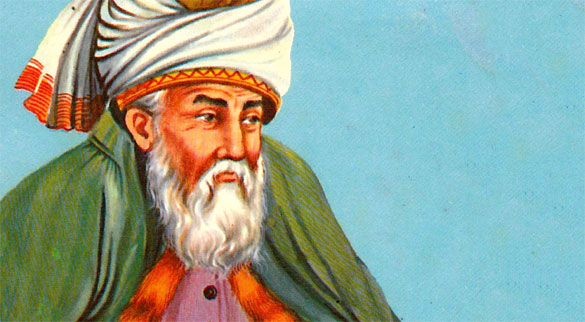 “My religion is, to live through Love.” Rumi

The article envisages carrying out a study of Rumi's views on Universal Religion and their impact on the development of composite culture. The thirteenth century poet-philosopher Maulana Jalal-ud-Din Rumi is one of the foremost spiritual geniuses of human history. With the passage of time his perennial wisdom is yielding profound spiritual insights. His exceptional creativity is globally being acknowledged in our times and climes. Universal religion has emphasised the basic unity of all the world's great religions. This teaches reverence for all. It teaches that multiple spiritual paths lead to the same purpose. Higher values depend on the growth of human personality and the growth of human society. Universal religion claims that by virtue of the creative spark inside him, every man will create direct contact with the eternal. After all, the everlasting is the true ground of his life. The bottom line message is that even while one finds his own path to be real and others to be false, he can still have peaceful coexistence with the travellers of other routes.

Rumi's World-View brings out Rumi's spiritual perspective on universe. For Rumi, the ground of Being is akin to what we feel in ourselves-a spirit or an ego. The entire cosmic existence is comprised of an infinite number of egos emerging out of the Cosmic Ego. The cosmological vision of Rumi is thoroughly teleological like that of classical Aristotle. Like modem Bergson he is also a creative evolutionist. He also seems to be subscribing to the emanationistic cosmology of Plotinus. Metaphysically speaking, every being has emerged from a kind overflow of ‘the Divine Spirit'. However, every being is impelled by an irresistible urge to return to its origin. This urge is nothing but love, according to Rumi. Love is the primal evolutionary principle of all existence. Every ego or monad is essentially spiritual and each ego or monad has emerged from the same Divine Principle. For Rumi, God is the origin and destiny for the entire process of evolution. He is not only the ground but also the goal of all existence. Rumi is in full agreement with mechanistic evolutionists that life has evolved out of Matter. However, Matter itself is essentially spiritual for Rumi.

In Rumi's worldview there is an unqualified emphasis on uncreatedness of the transcendental Self of man. The essence of Rumi's religious consciousness is his advocacy of identity between Divine and human Orders of existence, although man is painfully and wistfully conscious of by the pangs of separation. Human soul is essentially or originally from God.

However, the soul is painfully conscious of the fact of separation. Our entire moral and spiritual struggle is aimed at self-realization- a realization of our essential identity which God, signifying a return to car Origin. All of us are evolving back to God. According to Rumi, in this evolutionary process, the minerals develop into plants, plants develop into animals and animals develop into men. The men are destined to develop into superhuman being. We are ultimately reaching back to the starting point i.e. God who according to the Quran is the beginning and the end and to whom everything has to return.

With respect to Love Rumi says that it is a cosmic feeling, a spirit of oneness with universe. Love, says Rumi, is the remedy of our pride and self-conceit. Any form in which love expresses itself is good not because it is a particular expression, but because it is an expression of love. Forms of love are irrelevant to the nature of religious experience. Love is different from feelings of pleasure and pain. It is not regulated by any consideration of reward and punishment. Not only is faith generated by love, but, what is more, faith generated by any other motive is worthless. Faith developed out of imitation, custom or scholasticism is not acceptable to Rumi. Love is the essence of all religion.

The religion is not the creed of any one particular religious community but being the religion of the universe is a universal religion. Rumi describes his search for God after having realized the nature of his own ego. He moves from creed to creed and dogma to dogma. Not finding Him in temples, institutions, and symbols, he returns unto himself and discovers Him there in the sanctuary of his own heart. He is not satisfied with any creed until God is directly experienced by him. Here is one of the finest mystical lyrics of Rumi:

objects of which they were the names; the names and the

when egos were not yet individualized and there was not yet

any question of `I' and `We.' I searched for God among the

Christians and on the Cross but there in found Him not. I went

into the ancient temples of idolatry; no trace of Him was there.

I entered the mountain cave of Hira (where the Archangel

Gabriel appeared to the Prophet) and then went as far as

Qandhar but God found I, not neither in low nor in high

places. With set purpose I fared to the summit of Mount

Caucasus and found there only 'anga's habitation. Then I

directed my search to the Ka'bah, the resort of old and young;

God was not there even. Turning to philosophy I inquired

about Him from ibn Sina but found Him not within his range. I

divine manifestation only a `two bow-lengths' distance from

him' but God was not there even in that I exalted court.

Finally, I looked into my own heart and there I saw Him\He is

This is the experience and language of the great mystics of all spiritual religions who were not satisfied with institutional religion, and who based their spiritual life on personal experiences and convictions not derived from theologies and philosophies. These experiences are the common heritage of all great souls and the common ground on which great religions meet, disregarding intellectual formulation of dogmas and diversities of modes of worship which have made religion a dividing instead of a unitive and harmonizing force. Rumi is one of those rare saints and mystics whose intellectual fibre and creative moral and social effort is not weakened by subjective emotional experiences unrelated to the realities of everyday life. In him spirituality, rationality, and universal morality have found a healthy synthesis. God, universe, and humanity are embraced in a single all-encompassing vision, the vision of creative love. (Sharif, p. 838).

The religion of a mystic philosopher like Rumi is Universal Religion, which could not be enclosed within any orthodox or dogmatic boundaries. In one of his lyrical compositions Rumi claims' that he is not a Muslim, a Jew or a Christian. He is neither from East nor from West; neither from Land nor from Sea; neither from Iraq nor from Khurasan. He is neither of India nor of China nor of Bulgaria. He is placeless and traceless. He is neither body nor soul, for be belongs to the Beloved. He has put duality away and has seen two worlds as one. One he sees and one he knows, One he sees and One he calls. Rumi's ethical philosophy is a culmination of Sufi beliefs and values. As an anti-establishmentarian, he has advanced liberal, horizontal and pluralistic values. He is sincere enough to stipulate that one moment of companionship with men of God is superior to hundred years of prayers offered to God. He is iconoclastic enough to suggest that being considerate to a fellow human being is better than going on pilgrimage to Kabah, for one human heart is superior to thousands of houses of God. He belongs to the religion of lovers is nothing but God. He is neither formalistic nor sanctimonious for religious symbols do not necessarily signify spiritual authenticity. Ethical values stem from self- realization leading to God-realisation. It is realization of God by recourse to love of God that can inculcate in us love and compassion for fellow human beings.

Disclaimer: The views and opinions expressed in this article are the personal opinions of the author.