Monotheistic Religions Have Hospitality, Graciousness, Kindness, Compassion and Inclusiveness with Other Positivities of Life Rooted In Their Ethics

1.    Let the world adopt humility, compassion, love and brotherhood so that it brings back our inborn humane qualities.

2.    Hospitality and graciousness are the divine qualities that awaken the spiritual trait that the human being has inborn in his persona.

3.    Humanity has stopped practising the lessons of spirituality that introduce the society with Sufis, Saints, Rishis and Munis hospitable and generous acts.

4.    'Hospitality' had a special place in Prophet Muhammad Pbuh’s life. 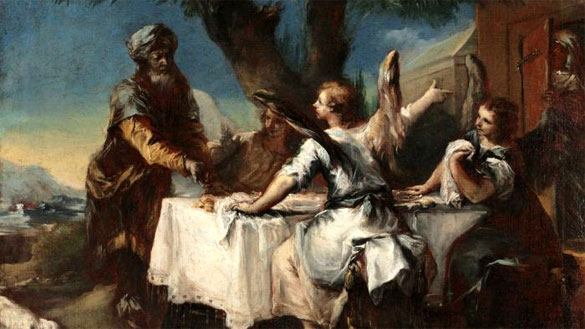 Hospitality, understood as both an act and an attitude to life, demands a transformation of the self towards goodness and grace — to how God wants us to be with one another. Image: Rembrandt van Rijn, “Abraham Welcoming the Three Angels” (Photo by Heritage Arts / Heritage Images via Getty Images). (Adh-Dhariyat: 24-27)

Monotheistic religions have hospitality, graciousness, kindness, compassion and inclusiveness along with other positivities of life rooted in their ethics. These are divine qualities that awaken the spiritual trait that the human being has inborn in his persona.

Even the animals have some of these qualities in them. Animals also exhibit love and compassion in their wildlife, for the breed they belong to. The pet animals are pets because of their inborn qualities of faithfulness and compassion for their masters.

Allah the Most Compassionate created the universe with innumerable signs that teach the human being the lesson of compassion and inclusiveness. Among all these humane characteristics of human beings 'hospitality' had a special place in Prophet Muhammad Pbuh’s life. The holy Prophet is reported to have said, “There is no good in the one who is not hospitable”. According to this tradition, hospitality is one humane quality that Prophet Muhammad Pbuh takes supreme. Even before the Prophet Muhammad Pbuh was bestowed prophethood, he was hospitable to strangers, the guests and the destitute. His inborn humane qualities of compassion, honesty, hospitality and generosity were witnessed by his family and society.

Allah is All Generous. He dislikes meanness and miserliness. The Holy Quran and the Holy Bible have various verses describing the practice of hospitality and generosity that are handsomely rewarded by the Most Generous Allah on the Day of Judgment.

And they give food in spite of love for it to the needy, the orphan, and the captive, - (Al-'Insan: 8)

Righteousness is not in turning your faces towards the east or the west. Rather, the righteous are those who believe in Allah, the Last Day, the angels, the Books, and the prophets; who give charity out of their cherished wealth to relatives, orphans, the poor, ˹needy˺ travellers, beggars, and for freeing captives; - (Surah Al-Baqarah - 177)

They ask you as to what they should spend. Say: “Whatever good you spend should be for parents, kinsmen, orphans, the needy and the wayfarer; and whatever good you do, Allah is all-aware of it.” - (Surah Al-Baqarah - 215)

So fear Allah as much as you are able and listen and obey and spend (in the way of Allah); it is better for your selves. And whoever is protected from the stinginess of his soul - it is those who will be the successful. - (At-Taghabun: 16)

And He also says: O you who believe! Give of the good things which you have [honourably] earned, and of the fruits of the earth which we have produced for you…And whatever you spend in charity or devotion, be sure Allah knows it all.  - (Al-Baqarah: 267–270)

“Has the story reached you, of the honoured guests [three angels; Jibril (Gabriel) along with another two] of Ibrahim (Abraham)? When they came into him and said: `Salam (peace be upon you),’ He answered: `Salam (peace be upon you),’ and said: `You are a people unknown to me.’ Then he turned to his household and brought out a roasted calf [as the property of Ibrahim (Abraham) was mainly cows]. And placed it before them, (saying): `Will you not eat?” (Adh-Dhariyat: 24-27)

Is it not to share your food with the hungry and to provide the poor wanderer with shelter— when you see the naked, to clothe them, and not to turn away from your own flesh and blood? - Isaiah 58:7

Verses from Bible on the Divinity of Hospitality

Above all, love each other deeply, because love covers a multitude of sins. Offer hospitality to one another without grumbling. - 1 Peter 4:8-9

...and is well known for her good deeds, such as bringing up children, showing hospitality, washing the feet of the Lord’s people, helping those in trouble and devoting herself to all kinds of good deeds. - 1 Timothy 5:10

Rather, he must be hospitable, one who loves what is good, who is self-controlled, upright, holy and disciplined. - Titus 1:8

At that hour of the night, the jailer took them and washed their wounds; then immediately he and all his household were baptized. The jailer brought them into his house and set a meal before them; he was filled with joy because he had come to believe in God—he and his whole household. - Acts 16:33-34

When a foreigner resides among you in your land, do not mistreat them. The foreigner residing among you must be treated as your native-born. Love them as yourself, for you were foreigners in Egypt. I am the LORD your God. - Leviticus 19:33-34 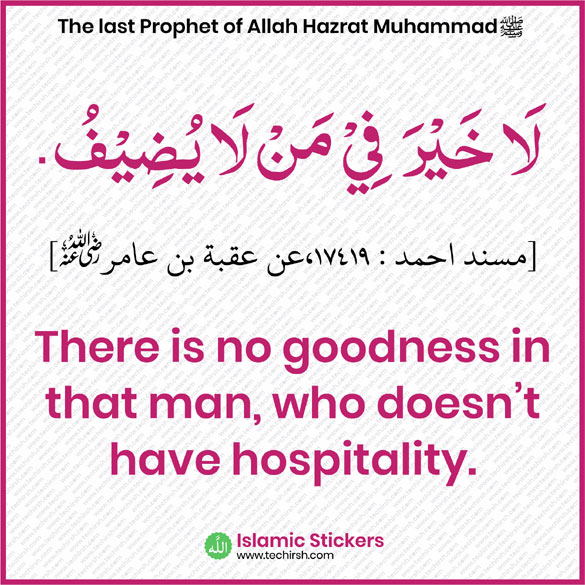 Prophetic Tradition of Hospitality and Graciousness

“Islam began in strangeness and it will return to strangeness just as it began, so blessed are the strangers.” - Prophet Muhammad Pbuh

“Indeed whoever believes that Allah is All-Generous, Who provides for His creation and rewards those who are hospitable towards their guests, should look after his guest.” Prophet Muhammad Pbuh

Abu Shuraih reported: The Messenger of Allah, Pbuh said, “Whoever believes in Allah and the Last Day, let him honour his guest and recompense him.” They said, “O Messenger of Allah, what is his recompense?” The Prophet said, “It is for a day and a night, as good hospitality is for three days and after that it is charity.”  - Saheeh Al-Bukhari 5673, Saheeh Muslim 3255

Prophet Muhammad (SAW) reportedly said, "If you stay with some people and they entertain you as they should for a guest, accept is; but if they do not do then you should take from them the right of the guest, which they ought to give."  Sahih al-Bukhari 6137 and Sahih Muslim 1727(Book 18, Hadith 4289)

A Companion asked the Prophet (SAW), "O Messenger of Allah! If I visit a man, and he does not entertain me or show hospitality, and later this man visits me, should I entertain him or treat him in the way he treated me?" The Prophet (SAW) replied, "Entertain him." - At-Tirmidhi

Narrated Abu Huraira(R): The worst food is that of a wedding banquet to which only the rich are invited while the poor are not invited. And he who refuses an invitation (to a banquet) disobeys Allah and His Apostle. Sahih al-Bukhari and Sunan Ibn Majah

“A man visited a brother in another town. Allah (SWT) sent an angel to lie in wait for him along his way. When he came upon the angel, he asked him: ‘Where are you going?’ He answered: ‘I am going to visit a brother of mine in this town?’ The angel asked further: ‘Is there any favour that you want to get from him?’ The man said: ‘No, it is only that I love him for Allah’s (SWT) sake.’ The angel then said: ‘I am a messenger of Allah to you (to tell you) that Allah (SWT) loves you, as you love your brother for His sake.” (Muslim)

“There is no person like a person who takes the reigns and fights for the sake of Allah, avoiding people’s evil, and a person among his sheep in the outskirts giving meal to his guest, honouring his right.” [Ahmad & al-Haakim]

Above mentioned verses from the Holy Bible and Holy Quran and the Prophetic traditions pinpoint the necessity of looking after the strangers (travellers and poor) akin to our family members. In the present context of a war-ridden world and innumerable refugees all over the world, it can be said that human beings hospitable behaviour and compassion for them will bring the world again to its true origin of compassion and brotherhood.

Given the monotheistic religions’ inclusive regard for hospitality and graciousness, it can be said that the chaos created by war, terrorism, sectarianism and regionalism is the result of us forgetting our duty of being hospitable and compassionate towards the poor creations of Allah, the Most Gracious.

Hospitality a Duty towards Others

The above-mentioned verses from the Holy Quran and the Holy Bible are calling men, the followers and the believers, to join hands together and be hospitable and generous to all the strangers and those who have come from other countries (refugees), keeping the Bible verse in view, ‘When a foreigner resides among you in your land, do not mistreat them. (Leviticus 19:33). And the Holy Quran says, ‘And whoever is protected from the stinginess of his soul - it is those who will be the successful. - (At-Taghabun: 16)’

Like many other negativities that have crept in in our society, hospitality has also been forgotten as a sign of a cultured society. Humanity has stopped practising the lessons of spirituality that introduce the society with Sufis Saints Rishis and Munis hospitable and generous acts. We have forgotten the relevance of Kabir Das’ following Doha which is a Dua to understand and practice.

The stories of hospitality and generosity of our Sufis, Saints Rishis and Munis are adoring the literary books and have become a lesson best forgotten.

The world is bereft of the heartfelt Dua and blessings that a hungry gives after the hospitality he receives. These acts of hospitality were a real shield for our society and the world at large.

Righteous people among us feel something missing from the world environment and that is the blessings of the poor, the needy and the destitute.

The world today is not giving water to the thirsty and bread to the hungry. The world is sending the widows and orphans of the war-torn countries empty-handed. And so many people are killed either due to terrorism, militancy, war or hunger. We cannot expect God to be kind to us if we are being unkind to His creation, in need. Consider the following verses from the Holy Bible:

“You have given no water to the weary to drink, and you have withheld bread from the hungry” (Job 22:8)

“You have sent widows away empty-handed, and the arms of the orphans you have crushed” (Job 22:9)

Le the world adopt humility, compassion, love and brotherhood so that it brings back our inborn humane qualities and we could transform our lives in a beautiful gift that Allah the Most Compassionate and Gracious has bestowed upon us.