Given That the World Is On the Verge of Collapse, Encouraging Constructive Interactions between Muslims and Non-Muslims Is Imperative

1.     The topic of interactions with non-Muslims has become extremely crucial.

2.     The Qur'an views humanity as the progeny of a single mother and father.

3.     Every human being is our brother, just as a believer is the brother of another believer.

4.     Mischief and discord amongst people based on religion and race are not appropriate.

5.     It’s essential to foster constructive interactions without resorting to religious or sectarianism-based violence. 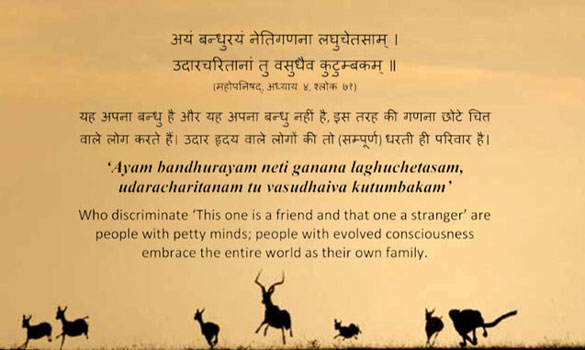 In the twenty-first century, the topic of interactions with non-Muslims has become extremely crucial. It is regrettable that this subject is only handled from a material and political standpoint; yet, because we regard Islam to be a comprehensive system of life and universal religion, we must also address the issue of non-Muslim interactions from an Islamic perspective and discover what the genuine teachings of Islam are on this subject.

First and foremost, keep in mind that the Qur'an views humanity as the progeny of a single mother and father. According to the Qur'an, humanity as a whole is a family.

“O mankind, fear your Lord, who created you from one soul and created from it its mate and dispersed from both of them many men and women. And fear Allah, through whom you ask one another, and the wombs. Indeed Allah is ever, over you, an Observer.” (Surat an-Nisa/ 4:5)

Considering the text above, it is apparent that humanity as a whole is one family. It's as though the entire human race is made up of tree branches and flowers from the same bouquet. This passage stresses the importance of human brotherhood. In terms of human relationships, every human being is our brother, just as a believer is the brother of another believer. The bond is so strong that it has expanded over the globe. Regardless of where a person resides, whether in a country, a city, or an area, that person is a member of our family. Because the entire human race is our family, we must live in love and peace with one another and demonstrate our brotherhood by looking after one another's lives, finances, families, and human rights.

Muslim Sharif has narrated: “The creature is the family of Allah and the person who is more beloved to Allah is more useful to his family.”

Praise be to Allah because He loves His servants so deeply that He refers to them as His family, despite the fact that He is without flaws and does not require any family.

Human dignity and respect for mankind, according to the Qur'an, is the second foundation of human relationships. The Qur'an declares all people, regardless of faith or nationality, to be honourable and revered as human beings.

Allah says in the Quran: “And We have certainly honoured the children of Adam and carried them on the land and sea and provided for them of the good things and preferred them over much of what We have created, with [definite] preference.” (Surah Bani Isra'il/ 17:70)

At one point, the Qur'an described the human body as the best stature. Allah says: “We have certainly created man in the best of stature” (Surat at-Tin/ 95:4)

After considering these verses, it is clear that Fitna and mischief amongst people based on religion are not appropriate. Because of race, it is not appropriate to cause discord. It is not proper to consider someone honourable and dignified because of wealth, nor is it proper to consider someone degraded because of poverty; rather, who is devout and whose deeds are virtuous is the measure of good and evil, honour and dignity. Allah declares:

“O mankind, indeed We have created you from male and female and made you peoples and tribes that you may know one another. Indeed, the noblest of you in the sight of Allah is the most righteous of you. Indeed, Allah is Knowing and Acquainted.” (Surah Hajarat/ 49:13)

This passage is addressed to all human beings, not just Muslims, and sends a clear message that there is no distinction between them and that they are all formed in the same way. They are split into tribes and families, but this does not mean that they degrade and fight with one another because of their tribal and family distinctions; rather, it means that they recognise one another and acquire a good understanding of one another.

Only one standard of honour and pride has been established by Allah Almighty, and that is Taqwa, which is the fear of one's Creator and Master, as well as the sense of responsibility for one's conduct after death. This standard carries the concept of merging human hearts and living in a loving and affectionate manner. The pious man does not do anything that is displeasing to Allah for the purpose of his own personal gain, but he always considers his Lord's pleasure. Even if he was born into an ordinary family, if this enviable feature is present in someone, he is dignified, trustworthy, and deserving of respect. Then Allah is the Protector of such individuals. He prevents them from getting into any trouble and assists them in such a way that it does not even enter their minds. Allah declares: “And whoever fears Allah - He will make for him a way out” (Surah Talaq/ 65:2)

As previously said the Holy Qur'an created humanity as a whole with one soul and made it honourable. In practise, the Prophet of Islam has made this fact very clear. He was sitting with his Companions one day. When the Prophet (peace be upon him) saw a burial of a Jew from the people of Medina passing by, he rose up. "O Prophet of God!" his Companions exclaimed. “He's a Jew”, says the narrator. “Isn't he the deceased Jew a soul created by God?” the Prophet said, teaching them how to be courteous Muslims who were attentive to others’ sentiments. (Bukhari, Hadith 1312).

How far do our snap perceptions of people go? How many rash decisions do we make about our fellow beings without realising it? Don't we learn from the Prophet’s regard for a dead soul in the preceding example? He never sneered at or cursed a human or an animal. He was a lovely and compassionate individual. His dictionary does not include the words “violence” or “harshness”.

If we look at the Sira, we can see that the Prophet (peace be upon him) made numerous agreements with infidels, polytheists, and People of the Book for the protection of humanity and the establishment of peace in order to avoid oppression and bloodshed, and to ensure that no one kills others simply because they belong to a different religion, tribe, or family. People should instead appreciate one another as human beings. At the same time, the Prophet (peace be upon him) kept a vigilant eye on mankind's enemies in order to prevent any damage or threat to humanity.

When a person loses sight of his position or believes he is superior, he is more prone to sedition and mischief. Jealousy, hatred, backbiting, stealing, gossip, murder, and immorality are among the disorders that afflict him. It must be reformed and trained in this scenario. Maulana Hali has remarked on this, saying:

Meaning: (Being human is preferable to being an angel

However, it necessitates a significant amount of effort)

Man has lost his greatness today. He's looking in the wrong place for his sense of decency. He has made the world's transient luxury his life's objective. Lust crosses the line into dishonour and disrespect by entirely enslaving the self. There is no longer any regard for human life. When someone is in authority, his subordinates are oppressed. If there is a person in power, he is drunk on arrogance and has adopted an oppressive and unfair attitude toward his subjects, making it impossible for the average man to exist by putting him in trouble with new laws and regulations. All of the moral values that separate man from Satan are vanishing. As a result of these factors, the entire globe is on the verge of collapse. In such a situation, it is critical for humans to build positive relationships and exchanges, as well as to guide lost wanderers the proper road, without resorting to religious or sectarianism-based violence. They should be educated about the system, which is both a benefactor to humanity and a guarantor of well-being.