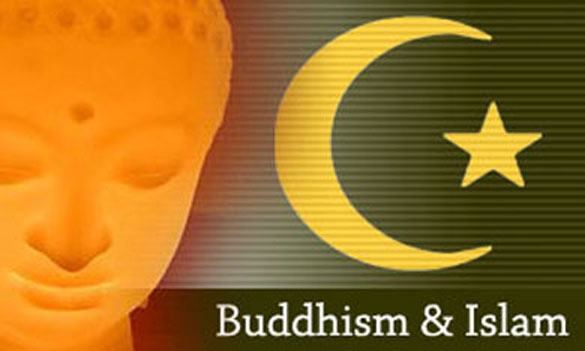 At a time when we are fated to realise that the world is moving towards another ‘clash of civilizations’, the pressing need of the time is to recall and refresh the thought resources of the global peacemakers for the complete cessation of the imminent conflicts among countries, cultures and religions. It requires a holistic exploration of the worldviews of the global peace actors.  The key is not the blurring of religious distinctions or categories, but the great resources of peacemaking deeply inherent in their thoughts and practices.

While the extremist fringes of violence and conflict are weakening the social fabric of our communities, the sane voices of peace, pluralism and nonviolence still reverberate across the globe.

There is no dearth of peaceful references and spiritual commonalities among our faith traditions, as diverse as even Islam and Buddhism. But we often overlook them in an unconscious bid to further the nefarious ends of the religious bigots.

Though we entertain acute differences in numerous theological, doctrinal and jurisprudential matters of faith, we cannot reject the mystical “common grounds” deeply seated in the sacred texts of Islam and Buddhism. They exhort the two communities not only to tolerate, but rather accept and honour each other, not merely as human beings in general, but also as adherents of the two distinct faith traditions—Islam and Buddhism.

Just as eternal salvation (Nijat-e-Abadi) in Islam is well-embedded in the “Five Pillars of Faith”, the spiritual enlightenment in Buddhism is summed up in the “Four Noble Truths” Much like the earlier were revealed to the Prophet Muhammad (pbuh) starting from the cave of Hira until his demise in Madina, the latter were delivered by Gautam Buddha to five monks at Isipatana in Banaras.

The Buddha’s first two noble teachings identify the root-causes of suffering, sadism and their consequences, while his second and the third teachings lay down the spiritual panacea for these ills. Inevitably, the four noble truths lead to a completely compassionate, peaceful and humane living style which ultimately ushers in peacemaking and conflict resolution. Ultimately, the way leading to the end of sufferings, in the Buddhist tradition, is the noble eight-fold path, that is, to purify one’s view, intention, speech, action, livelihood, effort, mindfulness and concentration.

Remarkably, these are repeatedly enunciated in the Quran as well. The broader notion of salvation in Islam, as stated in several Quranic verses, is pertinent to the “cessation of suffering”. Quran calls for the right view, right intention, right speech, right action, right livelihood, right effort and right mental concentration to save oneself from the sufferings of this world and the hereafter. (2:62)

The principle of karma, which is central in the Buddha’s teachings, is very similar to Islamic ethics (Akhlaqiyat). Similarly, there are candid commonalities between the noble eight-fold path of the Buddhist dharma and the ethical Islamic Shariah.

The great Gautam Buddha is primarily known for his spiritual enlightenment, also known as Nirvan or the eternal salvation in the Buddhist thought. It is summed up in the ‘Four Noble Truths’ (Catur-Aryasatya) as delivered by Gautam Buddha, to five monks in the Deer Park at Isipatana, Banaras, popularly known today as Varanasi:

Fourth, this state can be realized by engaging in the Noble Eightfold Path (Marga-Satya).

In his exhortation of the four noble truths, Gautam Buddha asks and then convincingly answers this question: ‘What is suffering?’

Buddha, then, asks as to what is the origin of suffering? The answer given in his teachings is: It is craving, accompanied by delight and lust, craving for sensual pleasures, craving for being, and craving for non-being.

Ultimately, the way leading to the cessation of sufferings, conflict and violence, in the Buddhist thought, is the Noble Eightfold Path. That is: Right View, Right Intention, Right Speech, Right Action, Right Livelihood, Right Effort, Right Mindfulness and Right Concentration.

Gautam Buddha further explains his enlightenment in terms of the ‘Dhamma’ meaning: ‘law’, ‘way’ or ‘norm’ and implying an ‘ultimate truth’ resulting into the spiritual salvation.

Remarkably, the broader notion of salvation in Islam, as clearly stated in several Qur’anic verses, is also pertinent to the ‘cessation of suffering’. The Qur’an repeatedly calls for the right view, right intention, right speech, right action, right livelihood, right effort and right mental concentration as the desired ways to salvation from the sufferings of hell. The Holy Qur’an says:

Indeed, those who believed and those who were Jews or Christians or Sabeans [before Prophet Muhammad] - those [among them] who believed in God and the Last Day and did righteousness - will have their reward with their Lord, and no fear or grief will befall them, nor will they grieve. (2:62)

Thus, the moral values in the Buddhist thought have close resemblance to the ethical teachings of Islam. There are candid commonalities between the Noble Eightfold Path of Buddhist Dharma and the Ethical in the Islamic Shariah. This spiritual symbiosis is patently clear in this famous Hadith tradition of the Prophet Muhammad (pbuh):

‘O My servants’, Allah tells us in his divine decree (Hadith Qudsi): ‘it is nothing but your actions (karma) that I reckon up for you and then recompense you for.’ (Reported by Imam Muslim, Imam Tirmidhi and Ibn Majah)

The Buddha also relays the Dhamma as ‘profound, peaceful and sublime, unattainable by mere reasoning, subtle, to be experienced by the wise’. This draws close resemblance to the basic tenet of Islamic spirituality, known as Ihsan or Rabbaniyah in the Qur’an.

Noted Islamic scholar, Fethullah Gulen has elucidated the concept of Ihsan (Perfect Goodness) in his book on Sufism: “Emerald Hills of the Heart” (Key concepts in the practice of Sufism):

“Ihsan has two literal meanings, doing something well and perfectly and doing someone a favour; it is sometimes used in the Qur'an and the Sunna with either meaning. At other times, as pointed out in the reflections on Heart - 2 while describing Prophet Joseph's consciousness of Ihsan, it is used to encompass both meanings”.

Gulen further writes: “According to truth-seeking scholars, perfect goodness is an action of the heart that involves thinking according to the standards of truth; forming the intention to do good, useful things and then doing them; then performing acts of worship in the consciousness that God sees them. To attain perfect goodness, an initiate must establish his or her thoughts, feelings, and concepts on a firm belief, and then deepen that belief by practicing the essentials of Islam and training his or her heart to receive Divine gifts and be illuminated by the light of His manifestations. Only one who has attained such a degree of perfect goodness can really do good to others just for the sake of God, without expecting anything in return”.

In order to explain the most comprehensive and precise meaning of Ihsan (perfect goodness), we should focus on these two famous Prophetic traditions (Hadiths):

2)       Ihsan, in the sense of doing good to others, is summed up in the Prophet's principle of desiring for one's fellow Muslim whatever one desires for oneself.  [Al-Bukhari, "Iman," 7; Muslim, Imaan, 71]

The goal of mysticism within all faith traditions is not simply to destroy the materialism. Rather, it is the dialogue of sprit and mind which is well-embedded in all religions. Given the spiritual symbiosis between the peace narratives of Islam and Buddhism, the two can be brought on the same philosophical plane in the global peace policies today. Therefore, we need to highlight the common ethical and moral approach that underlies philosophical discourses of Prophet Muhammad (pbuh) and Gautam Buddha, who offer great hope for peacemaking exercises in the increasingly violence-prone globe. Their thought resources for peacemaking can be blended together to produce a discourse of positive action. In fact, Prophet Muhammad (pbuh) has envisaged his teachings of right conduct, unconditional love and tolerance in full synergy with the Buddha’s Noble Eight-fold Path: Right View, Right Intention, Right Speech, Right Action, Right Livelihood, Right Effort, Right Mindfulness and Right Concentration.

Ghulam Rasool Dehlvi is a scholar of classical Islamic studies, cultural analyst and researcher in media and communication studies and regular columnist with NewAgeIslam.com