1.   We can share our stories and bond as human beings.

2.   Develop an appreciative understanding of other religions.

3.   Look at aspects of one’s own religious tradition that are awkward. 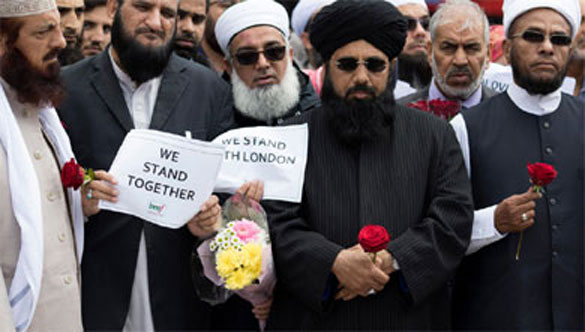 Shortly after the event of 9/11, my friends Pastor Don Mackenzie and Rabbi Ted Falcon and I formed an alliance called the Interfaith Amigos (‘Amigo’ means ‘friend’ in Spanish). We began to travel around the U.S. and speak at conferences and seminaries, spreading the message of spiritual inclusivity, and this is something we continue to do. We have also written books together. One of these books is titled Getting to the Heart of Interfaith. In this book, we discuss various stages or steps in successful interfaith dialogue.

The first stage is about simply connecting, at the human level, with someone who is different from us in terms of religion—connecting as fellow human beings. There is this wonderful insight that the universe is not made up of atoms. Rather, it is made up of stories. So, can we simply share human stories and bond as human beings? There is no need to immediately delve into heavy discussion of theology, but there is a great need to share each other’s life stories and to bond or connect as fellow humans.

This Is The First Step Of Interfaith Dialogue

This understanding is necessary if we really want peace in a pluralistic society.

The third step in interfaith dialogue comes after one has established a friendship with another and there is a level of trust between them. This third step involves taking a close look at aspects of one’s own religious tradition that are awkward or difficult and that do not conform to the core teachings of the faith. The fact of the matter is that all religious traditions, as they have evolved over time and have become institutionalized, contain both truths as well as untruths. The latter are often a result of the fact that human consciousness is less than divine, and so our interpretation and understanding of religious scriptures can be less than divine. Are we willing to be vulnerable by feeling free to talk about these difficult aspects of our own tradition?

The fourth step in interfaith dialogue is possible only after there is close interpersonal bonding and a willingness to be vulnerable. At this stage, interfaith partners are able to enter into more difficult conversations even in difficult times. For example, over the years, Pastor Don, Rabbi Ted and I have travelled all over America and have given more than 200 presentations in universities, seminaries and churches. We have addressed many challenging questions and issues regarding interfaith relations. We have encountered, in the course of our work, many beautiful Abrahamic alliances—Jews, Christians and Muslims—doing wonderful interfaith events and dialogues. But, when there is a crisis in the world—say, for example, violence flaring up between Israelis and Palestinians— then, the dialogue stops and cannot proceed further. The alliance weakens or dissolves unless some people in that group have established an abiding friendship and have bonded as human beings so that, despite the current political tensions, the difficult conversations can continue and create understandings and alliances.

By the way, a very common complaint about interfaith programmes, particularly Abrahamic ones, is that they are intermittent and infrequent. When people do get together, the talk and behaviour are, one might say, “absurdly nice.” But once they go home, many go back to their stereotyping of the other’s religion and community. However, if the gatherings are more frequent, they provide the environment and opportunity for people to connect and become friends. Differences might remain, but the friendship makes it difficult to dehumanize people of another faith.

The fifth stage in interfaith dialogue is to be open to the beauty and wisdom in other religious traditions. So, when I as a Muslim am open to the beauty and wisdom of other religious traditions, it waters my Islamic roots. I become a better Muslim and a more developed human being. This is why we say that interfaith is not about conversion; it is about completion—becoming a more complete and developed human being.

Some people get scared at the thought of visiting places of worship other than those of the religion they identify with. They are reluctant to learn about other traditions, fearing that it might dilute their connection with their religion. However, all the anecdotal evidence suggests that if a person is rooted in a particular religious tradition and then becomes open to the beauty and wisdom of other traditions, it enriches their connection with ‘their’ tradition. They acquire a deeper understanding of ‘their’ faith. In my personal experience, my study of holy books from other traditions has deepened my understanding of the Qur’an.

The sixth stage of interfaith dialogue is about engaging in spiritual practices, focusing on the inner work essential to becoming a better and more complete human being. One can benefit from spiritual practices from various different religious traditions. We can focus on practices that help transform the ego and open up the heart so that one can truly embrace all the bewildering paradoxes of life and have much more space for joy, love and passion to flow inside oneself. By evolving into the fullness of our being, we can be of authentic service to God’s creation.

To overcome the overwhelming social justice issues of our times, we have to move beyond our prejudices and stereotyping of others. To heal our planetary degradation, we must change our lifestyle and overcome our selfishness, greed and apathy. All religions offer an extraordinary variety of universal techniques and practices to help us raise our consciousness and help us to become more developed human beings. Let us use the gift of these practices to become more spiritually developed.