Muslims Are Regularly Being Stopped From Performing Friday Prayers

1.    Muslims have been petitioning the government to allocate them land to build mosques but to no avail.

2.    In the absence of mosques, they have to pray in public places but only in those that were allotted to them by the administration.

3.    Hindu right-wing groups, in their visceral hatred of Muslims, have been disrupting namaz at multiple sites.

4.    The continued silence of mainstream and liberal Hindus is deeply troubling. 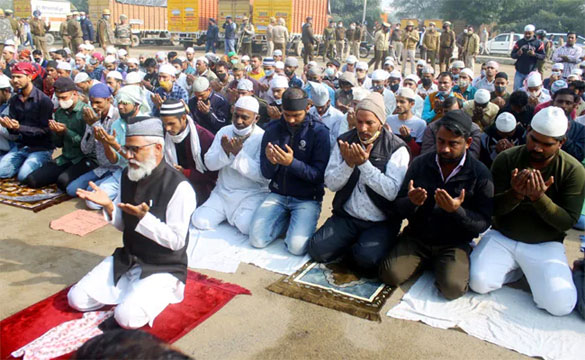 “This is all politics. There are vested interests on both sides. I don’t really like what is happening here.” This was the refrain from a friend of mine living in one of the many high rises in Gurgaon. Working for one of the many IT companies which dot the millennium city, I was generally inquiring from him about the ongoing disruption of Friday namaz happening through a concerted effort by Hindu right wing groups. I understand that many Hindus, like my friend, would not associate themselves with such groups. But their continued prevarication and silence on the issue is only emboldening these groups and their visceral anti-Muslim actions. In articulating the issue as arising from ‘vested interests of both sides’, my friend tries to create a false balance of forces which in fact does not exist.

The issue is fairly simple and there is really no “both sides to the story”. Many years ago, Muslims were allocated land to perform their prayer ritual in the absence of adequate number of mosques. The practice continued for years without any hiccup when various right wing Hindu groups started to object to Muslims ‘occupying’ public spaces to perform namaz. The very term occupation ignites sentiments that this is some diabolical plot by Muslims to acquire land in the name of religion. They even coined a name for it: land jihad. Muslims, however, have been petitioning the government to allocate them so that they can build mosques. It is the responsibility of the government to do, an act in which they have singularly failed. In the absence of adequate number of mosques, Muslims have been praying in the open.

One can certainly have positions for or against Muslims praying in public spaces. Many Muslims themselves have opposed the idea of a praying in public spaces and have advised them to pray in their homes instead. One is also aware that Muslim groups have as a matter of right, blocked public roads to perform their Friday prayers which is patently wrong. But the issue in Gurgaon is different. Muslims are not occupying roads here, neither are they praying at unauthorized places. They were simply praying at places that were allotted to them by the administration for that very purpose. And it is rather rich when such an argument comes from Hindu groups who themselves wont blink an eye to claim public spaces for religious rituals. For these Hindu groups then, it is not about the sanctity of public spaces; it is rather about an assertion that only Hindus have the right to such places. 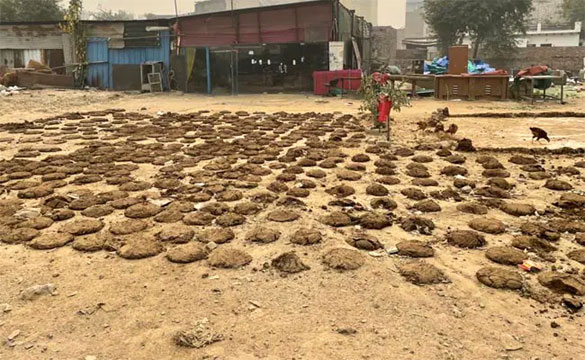 Cow dung was spread across a prayer site in Gurgaon

At sector 37 in Gurgaon, Muslims used to conduct Friday prayers in a parking lot. But due to the belligerence of Hindu groups, they were forced to give it up and move to some other locations; until some other group decides to disrupt their namaz there too. But it is not that the place in sector 37 has now been reclaimed as a parking space. I saw a huge tent erected there under which some Hindu religious ritual was going on. While the namaz normally does not take more than half an hour, the puja went on for nearly half a day. So, this is a very dishonest argument by the Hindu right that their campaign is to reclaim public spaces. By that logic they should not be performing the puja at the same site. But then we know that this is fundamentally about ‘showing Muslims their place’.

The signal is loud and clear: that Muslims will have to live at the mercy of Hindus; that any public manifestation of Muslim religiosity needs to be curbed in this new definition of Hindu nation. If at all a Muslim prayer has to be ‘permitted’, it can only be allowed at obscure places. I saw one of those obscure places in sector 29 which was surrounded by big hotels; away from the hustle bustle of residences and factories. The message is clear again: Muslims will be tolerated only to the extent that they are not visible.

India need not become a legal Hindu state; groups within Hindus are creating social conditions which would not require any legal framework to do so. In this they are ably helped by the ruling dispensation, particularly the chief minister of Haryana who some days ago declared that he will not tolerate namaz in public places. The police, whose responsibility it is to uphold law and order, stands as mute spectators at many of these orchestrated protests by Hindu groups. Under such conditions, Muslims have acted wisely and have avoided confrontation. But this gives further signal to the right- wing Hindus that they can get away with anything.

Ultimately, it depends on sane Hindus like my friend in Gurgaon to come forward and condemn what is happening in the name of protecting their faith. Why is it that we hear such ominous silence from liberal mainstream Hindus when it comes to condemning such brazen attack on Muslim religious practice? Why is it that we do not see any “Not in My Name” rallies and protests demanding that such hateful politics in the name of Hinduism must stop.

Where are the stalwarts saving the constitution when the rights of Muslims to freely practice their religion is being threatened now more than ever? Why is it that there is no effort from their side to stem this tide of hatred? Why is it that they are not doing any outreach amongst among Hindus to tell them what is being done in their name? Many of these stalwarts in fact became so only because Muslims across the country provided them with platforms and numbers. Now when Muslims in Gurgaon need them, where are they?

And where is the scholar politician who educated us about the difference between Hindutva and Hinduism? How should we understand this complicit silence of ‘liberal and tolerant’ Hinduism?