1.    Suffocating freedom of expression is strangulating out humanity from the human being.

2.    The ban on freedom of expression makes a human being an animal that is there to obey their masters, even if it is at the cost of their lives.

3.    Islamic Advocates Freedom of Expression As A Basic Human Right.

4.    Freedom of Speech is Freedom to Question in Hinduism

Freedom of expression is the lifeline of human life. Suffocating freedom of expression is strangulating out humanity from the human being. The ban on freedom of expression makes a human being an animal that is there to obey their masters, even if it is at the cost of their lives. But a human being is not an animal as it possesses intellect and wisdom that creates understanding. The understanding of things around create thoughts and their opinion. If the opinion of a person is suppressed, it is not that the world will lose a worthwhile opinion only but a wise person. A wise person is that who can think and make his opinion count. If a wise person is forced to live without his opinion he will either be mental dead roaming around like a zombie or will be a nuisance for society, losing his sense of living.

Religions are either divine driven or are commanded by the human being possessing extreme intelligence and wisdom with a heart full of love and sympathy for the fellow human being and the universe. In either of the cases, the human being is allowed to think and react to the matters that influence his life. All the faith traditions and religious groups, especially in India, advocate the necessity and importance of freedom of expression for human life to let it progress and grow in the realm of the diversity of opinion.

Islam Advocates Freedom of Expression As A Basic Human Right

Mankind does not like abusive and cursing words against his family and friends, because of the respect one has for them in his heart and mind. When it comes to religion, that is the pillar on which society stands, many among us do not allow others freedom of speaking against their religion. Although it is a fact that if one abuse it harms the abuser, not the abused. How come the respect and dignity of the religious leaders will affect if somebody of no standing in the society utters blasphemous words against him.

Karl Marx had written, ‘religion is the opium of the people’. This saying of him comes true only in the sense when humankind does not respect the freedom of speech of others and loses his patience.

Blasphemy in every religion and faith is considered the most hated speech. The followers and believers of the religions and religious faith take it to be a heinous crime. But Allah, the All knower does not take it as a crime and therefore there is no punishment commanded by him. The noble Quran says:

Allah loveth not the utterance of harsh speech save by one who hath been wronged. Allah is ever Hearer, Knower. (Ayah an-Nisa: 148) – Marmaduke Pickthall

Freedom of speech in Islam has been given one of the high pedestals for Allah the Most Gracious has bestowed wisdom and intellect to the human being. The Holy Quran says:

We have created man in the best composition, (Surah At-Tin: 4) — Mufti Taqi Usmani

The human being created by Allah has a best of composition than many of His creations. One of those best compositions is certainty the power to think and establish his own opinion by having discussions with the fellow human being. Allah the Most Kind has even permitted Iblis, the devil to express his opinion. Iblis, the devil discussed with Allah, the All-Knower as under:

[Allah] said, "O Iblees, what prevented you from prostrating to that which I created with My hands? Were you arrogant [then], or were you [already] among the haughty?" (Ayah Sad:75 ) - Sahih International

..... and those who control anger and forgive people. And Allah loves those who are good in their deeds, (Surah Ali 'Imran - 134) — Mufti Taqi Usmani

Let there be no compulsion in religion, (Al-Baqarah - 256) - Dr Mustafa Khattab

And had your Lord willed, those on earth would have believed, all of them together. So, will you (O Muhammad SAW) then compel mankind, until they become believers. (Surah Yunus: 99) - Mohsin Khan

Rasulullah (SAW) said: Remember, do not let fear of man prevented with the right person to say if he knew. " (Narrated by Ibn Majah, Hadith No 2191)

And the following Hadees in which Prophet Muhammad Pbuh addresses the Muslims of a Muslim dominated place:

A Muslim is one from whose tongue and hand other Muslims are safe (Muslim, No. 69). 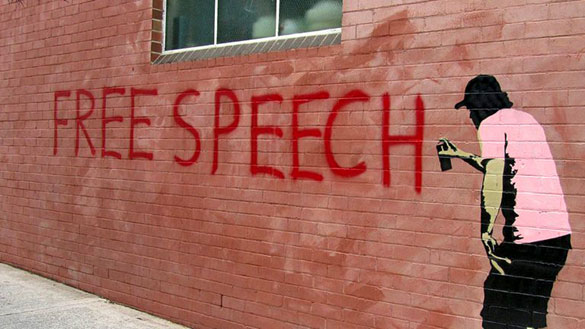 Freedom of Speech Is Freedom to Question in Hinduism

Following poem from the Rigveda Samhita, known as ‘Nasadiya Sukta’ is a live example of Hindu religion giving importance to question to understand the creation of the universe. Consider the following:

There was neither non-existence nor existence then;

Neither the realm of space nor the sky which is beyond;

What stirred? Where? In whose protection?

There was neither death nor immortality then;

That One breathed, windless, by its impulse;

Other than that there was nothing beyond.

Darkness there was at first, by darkness hidden;

Without distinctive marks, this all was water;

That which, becoming, by the void, was covered;

That One by force of heat came into being;

Who really knows? Who will here proclaim it?

Whence was it produced? Whence is this creation?

Gods came afterwards, with the creation of this universe.

Who then knows whence it has arisen?

Whether God's will created it, or whether He was mute;

Perhaps it formed itself, or perhaps it did not;

Only He who is its overseer in highest heaven knows,

Only He knows, or perhaps He does not know.

In fact in Hinduism education is equated with enquiry, to question. In the following from Bhagwat Gita we will find what Lord Krishna had to say about acquiring knowledge:

Learn that knowledge from

those who have realised the truth

a spirit of sincere enquiry

and serve them with humility

They will impart that knowledge to you 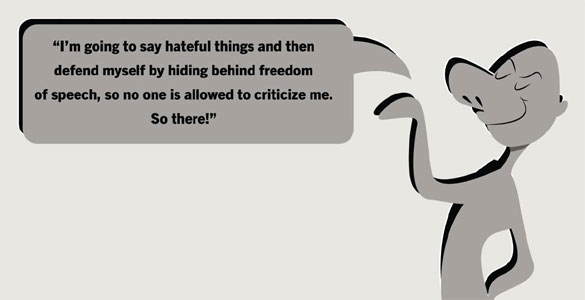 Misuse of Freedom of Expression Creates Disharmony and Commotion

Today's world is a perfect example of both freedoms of expression being throttled and being abused. Anything that we overuse or are not allowed to use brings disharmony and commotion in society. We must therefore be aware of the limits or freedom of expression whether on social or religious platforms. We should not be advocates at the end of anything that certainly becomes the reason for disquiet and harms the society we live in.

Islam, therefore, has warned human being of the misuse of freedom of expression. The Holy Quran says:

.....And what can be beyond truth except error? So how are you averted? ( Surah Yunus 10:31) - Sahih International

Necessary restrictions on the freedom of expression are obligatory to maintain peace and tranquillity and diversity of the society. This restriction does not harm humanity rather provides it with an opportunity to understand its role in social life.

The followers of other religions like Christianity and religious faiths have advocated in favour of freedom of expression and have acknowledged its value in the value system of humanity. A humane society is one where the speeches are not throttled rather given a place of respect to make the society liveable with all its citizens having the freedom of expressing their opinions on every matter of their concern and feel a part of it.