Baba Farid in Jerusalem: The Indian Hospice—Al-Zawiyya Al-Hindiyya—Marks A Spiritual Battle for Peace in Palestine

•        India’s peace-making efforts in Jerusalem could be traced back to over 800 years ago when the prominent Indian Sufi saint of the Chishti order, Hazrat Baba Farid Ganj Shakar from Ajodhan.

•        Since then, Sufi mystics from across the world have come to Jerusalem with their divine music, whirling and ecstasy, and have been engaged in a spiritual battle for peace in Palestine.

•        In the old holy city of Jerusalem, there is still a place called Al-Zawiyya Al-Hindiyya—Indian hospice (also known as Al-Hindi Sarai or Indian lodge), where Baba Farid lived and meditated in the early 13th century.

•        Traditionally, Indian pilgrims have gathered at Baba Farid's lodge, bringing with them instruments and melodies from the famous Indian province of Punjab.

•        Sufis have been singing verses written by Baba Farid and poems and hymns from Guru Granth Sahib, the central scripture in Sikhism. 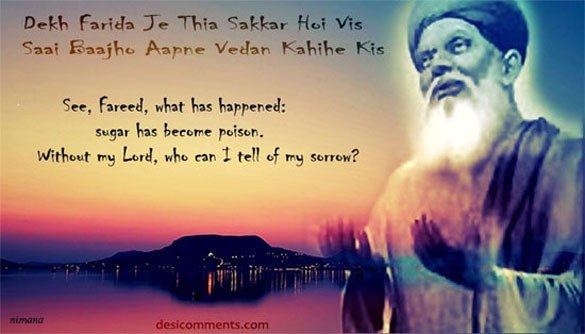 At the United Nations, speaking on clashes between Israel and Palestine, India’s Permanent Representative to the UN Ambassador T S Tirumurti said: India is “deeply concerned at clashes & violence in Haram Al Sharif/Temple Mount” and “equally concerned about evictions in Sheikh Jarrah & Silwan neighbourhoods." He also said India calls on both sides to avoid changing the status-quo on the ground and highlighted that the old city also houses Al Zawiyya Al Hindiyya—the Indian Hospice.

In fact, India’s peace-making efforts in Jerusalem could be traced back to over 800 years ago when the prominent Sufi saint of India, Hazrat Baba Farid Ganj Shakar from Ajodhan (now known as Pak Pattan) came for pilgrimage to Jerusalem.

We don’t exactly know how long Baba Farid stayed in the holy city of Jerusalem. However, long after he had returned to the Punjab, where he eventually became head of the Chishti Sufi order, Indian Muslims passing through Jerusalem on their way to Mecca started to pray where he had prayed. Thus, over a period of time, a holy shrine or lodge called, the Indian Hospice, was formed in the memory of Baba Farid.

Known in Arabic as al-Zawiyya al-Hindiyya or “Zawiyat al-Hunud”, this Indian Sufi hospice or Khanqah in Jerusalem greatly marks the great historic contributions that the Indian mystics have rendered as peacemakers. As the legend has it, Baba Farid came to the old city of Jerusalem around the year 1200, and meditated in a stone lodge for 40 days. Ever since, Indian Muslim pilgrims on their way to or from Mecca have been attracted to the site and eventually it became the Indian Hospice. The Zawiyah has been extensively documented.

Baba Farid arrived in Jerusalem at a time when the holy city had just returned to Muslim hands after almost a century of Christian rule. The Crusaders, ensconced along the Mediterranean coast, had not gone away, and Salahuddin Ayyubi understood that if Muslims were to keep Jerusalem, they would need to match the Crusaders not only on the battlefield but in their spiritual veneration of the city as well. It was the Indian Sufi Baba Farid who realised and translated it into reality.

Since then, Sufi mystics had been drawn to Jerusalem from across the world. Some Sufis who came to Jerusalem were barefoot drifters. They wandered from town to town in search of solace and tranquillity. They mostly wore rough woollen robes and slept in the desert. They wept in the pain of people and sang for the love of God. Thus, the Sufis in Jerusalem, with their music, whirling and ecstasy, have been engaged in a spiritual battle for peace in Palestine.

When Sultan Salahuddin Ayyubi re-consecrated Jerusalem and had the rock beneath the golden dome, he welcomed Sufi saints with open arms and encouraged popular devotion to the holy city's cultural and spiritual heritage, shrines and sanctuaries. In this beautiful historical ambience, Indian pilgrims gathered at Baba Farid's lodge, bringing with them instruments and melodies from the famous Indian province of Punjab. Since then in Jerusalem, these Sufi seekers have been singing verses written by Baba Farid and his disciple, Guru Nanak Dev. This beautiful peace poetry in Palestine binds together the Sufi and Sikh traditions of India in Jerusalem. Dozens of Baba Farid's poems and hymns are found in the Guru Granth Sahib, the central scripture in Sikhism which is a compilation of mystical verses.

The medieval traveller Evliya Chelebi has identified Al Zawiyya Al Hindiyya—the Indian Hospice—as one of the largest Zawiyahs in the city in 1671. Over the next 300 or 400 years, Sufi travellers from across the world have joined the Indians in Jerusalem in the construction of therapeutical Sufi centres, hospitals, schools and lodges that have housed mystics from Morocco and the Crimea, Anatolia and Uzbekistan.