Iqbal, Rumi, And Sartre: Is There Any God Who Created Man? 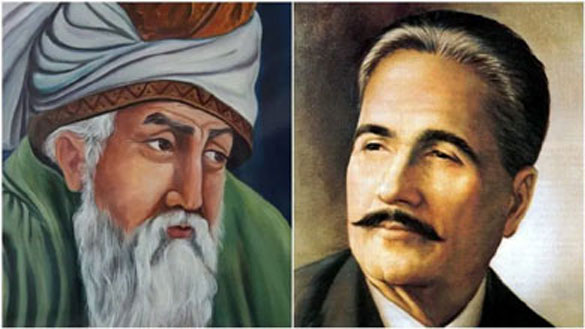 The eyes that cannot see the beauty of Allah are better to be blind.

The book is a treasure trove. The philosophical nuances with special reference to Iqbal, Maulana Rumi, and Sartre provide crystal clear concepts and the process of conceptualization regarding the nature of man with God. Man as vice-regent, his affinity with the material and the metaphysics, God as the Creator, His reason behind the creation etc. Thus this exceptional scholarly manual is helpful to all those coteries of philosophy in general and those who deal with Islamic philosophy in particular. Prof Kazmi justifies comparatively the serious issues without the slightest incoherence in demonstration.

It discusses the concept of God under the purview of Dr Iqbal, whose all philosophy is yoked upon the Quran and Islamic cannon called Shariah. Here, Prof Kazmi optimistically commenting comes-up with Dr Iqbal’s faith that God is above all without partners and noble in His Divine plans and decisions. A formless entity He is as the Creator and Re-creator. All issues whether physical or metaphysical are submitted to Him. Man is subjected to ills and pains, death and decay, elevation and retrogression, while as God is beyond such limitations which make Him-Lord, Creator, Sustainer and Destroyer, Omnipotent and the Cherisher, and Merciful. None and nothing goes wrong and defective in His issues. This is what the absolute must be. Everywhere is seen no form of Him and thus He is above all the anthropomorphic state. The same concept in Bharma-Sutra is mentioned.

God is only One and no second of Him is there, not at all, not at all, even of the least limit. It also mentions merit in Yajur-Veda: ‘He has no Form (Reflection) 32:2. Quran clearly mentions His majesty: No object of the world resembles Him. He does see and listen to everything (42: 11). Dr Iqbal concedes emphatically as a philosopher that inactiveness is not the attribute of God; it lies in the nature of creation. The existence of God is purged with defeats and the whole universe with events and occurrences has not reached on the station of whole, it is Becoming in Becoming and will be Becoming and Becoming for the cause and effect cycle is on run.

The concept of time and space has been beautifully argued in the book.

God is Supreme in super-time and Super-space. So even at the stage of high elevation, man cannot contrive to shun the bodily fate and become God, never can he be. Time Space, Causality and Duration are mere objects of interpretation of the world phenomena seen, shown, felt and assumed thereof and however the same belonging to God are Immeasurable. This proves that God in the universe of God-Being is of ontological scheme. Prof Latif in this regard gives reference to Iqbal’s work, Reconstruction of Religious Thought in Islam as: “The Quran has a clear and definite conception of nature as a cosmos of mutually related forces. At the same time, the Quran conceives God as holding all goodness in His hand.’

The book sheds light on the pure ontological existence of God. In Rumi’s creed, God is Love, and love begets love. It is there always but to proclaim it is in the application of the same over the reason in man’s existence. In love, he is in majority with the Superbeing. Like Iqbal, the book vividly clarifies that Rumi’s school of thought after keen reading and inferring is in the middle of Shahood and Wajuud. He clearly claims that God is in man but not man is God and there is a perennial and everlasting closeness between the two existences. God is Love and all of the love and the reach to Him is available when man loves Him selflessly.

Two aspects of philosophies are given space in the book: spiritual and atheistic with special reference to Jean Paul Sartre. Never the two meet together on any point of agreement. Sartre as the book mentions in his work, (Being and Nothingness) rejects any God there as Super Ego or Super Soul and if there existent has nothing to do with the man so holds it that there is freedom which makes man Self-reliant, self-responsible and none is there to whom he has to face. He is all of the universe and his life is actualized and idolised because of his own actions and thoughts. Rest is nothing. So, religious or spiritual substance is in negation. Freedom is not a being; it is the being of man so whole of the existentialism is based on the subjective nature of man which is clearly espoused by Karl-Jaspers when he says, the dignity of man is in his freedom. Let’s dig deep in both the couplets here.

Sartre in his philosophy says:

God is absence. God is the solitude of man. On freedom he says, man is condemned to be free; because once thrown in the world, he is responsible for everything he does.

The author has tried to give clear understanding of Rumi, Iqbal and Sartre which raises certain questions.  Is man the maker of his own destination? Is there any God who created him? The same are discussed comprehensively at length, but still the substance in the book demands exploration. In a nutshell, it is helpful to all the scholars and teachers in knowing the two different approaches on man.