The Myth of Quranic Preservation

1.    Muslims believe that the Quran is the very word of God and hence cannot be changed for all eternity

2.    Muslim tradition itself records that some verses, like the verse of Rajm, were not included in the Quran

3.    In early Islamic history, we do not see any systematic attempt to preserve and compile the Quran.

4.    Was Quran really that important in the eyes of the early believers?

The Quran holds a special place amongst all religious texts. While Judaism and Christianity believe their holy texts to be inspired by the Almighty, Muslims believe that the Quran is the very word of God. They further believe that not even a word of the holy text has been modified or changed through centuries. They argue that God has promised that He will protect his book and hence alteration in the text is understood as an impossibility.

Due to this and blind adherence to their own version of ‘history’, many Muslims find themselves living in two separate worlds. In the world of Quranic mythology, they continue to believe that the earth is flat and that the sun, stars and planets revolve around the earth, while they learn something fundamentally different in their schools. Similarly, they keep believing in creationism while the evidence that they learn in their science classes points towards evolutionism.

There are Muslims who would go to ridiculous lengths just to prove that every assertion of the Quran is backed by the science. But most Muslims keep living in these two separate worlds, unable to resolve the contradiction between the two. Since the belief is that Quran is the literal word of God, they cannot question any assertion of this text as it can only be done by painfully compromising one’s religious faith which not every Muslim is willing to do. Such a dichotomous worldview can only mean that fine minds would suspend their natural inquisitiveness when it comes to matters which have the potential of questioning some of the postulates in the Quran. No wonder, Muslim countries have been laggards when it comes to scientific research. 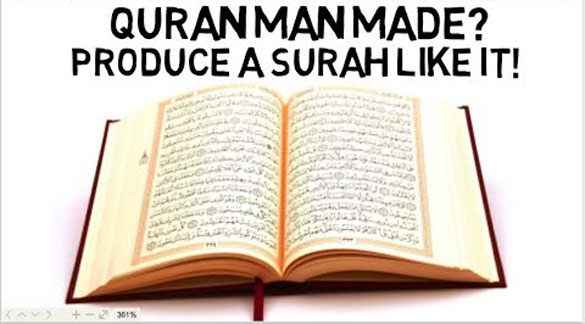 Debates within these pages have argued that in terms of language, scientific claims and historical assertions, the Quran cannot be said to be an extraordinary text. But even at a more basic level, if we simply look at the story of Quranic compilation, then also it becomes difficult to believe that the text is free from human mediation. It is too much of a flight of fancy to argue that the revelation (Wahy) that got engrafted on the heart of the Prophet is the same as what is today understood as the Quran.

But more importantly, it needs to be asked why the Prophet himself never gave much importance to the compilation of the Quran. The Muslim story is that whenever a revelation occurred, there were scribes (khatib) around the Prophet who would write it down. Some traditions also tell us that the Prophet himself at times corrected what was written on parchments and animal bones. But the Prophet never felt the need to compile the revelations in a single book. According to Muslim claim, Muhammad was the last of the Prophets and was sent as a guide to all mankind, not just Muslims. The Quran is similarly claimed to be the book of eternal guidance, which will continue to light up the path of truth till the end of days. So, it is rather intriguing, giving the central importance of the Quran in disseminating Islam, that it was never compiled during the Prophet’s lifetime.

Such an important text like the Quran should have been written down with utmost care. Rather what we find within the tradition is that it was handled rather in a cavalier fashion. Otherwise, it does not make sense why it would be written down on animal bones and leaves, some of which were even eaten up by animals. If the Quran was really upheld as the world of God, then the Prophet’s most important mission should have been its safe transmission to the next generation. He could have done so in one of the many collective functions which he presided over such as during the last Hajj. But Islamic traditions do not record anything like this ever happening or even the Prophet hinting at it.

Some Sunni traditions tell us that the Quran was compiled during the time of the first caliph, Abu Bakr while others tell us that it was done during the reign of the third caliph Usman. The Shia hold that it was Ali who had a complete copy of the Quran which he had compiled within six months of the death of the Prophet. Why is it that there is no unanimity amongst Muslims as to when their most important text was compiled especially given the fact that that all agree that Islam is impossible without the Quran. Does it tell us something about the importance attached to this book during the early years of Islam?

Whether it compiled by Abu Bakr, Usman or Ali, why is that we do not have any extant copy of the Quran attributed to these caliphs? After all, Islam, as they say, was born in the full light of history. We are not talking about a text at the dawn of civilization but that which came into worldly existence in the 7th century. Are we to believe that the Quran had no special importance to early Muslims? If not, then how should we reconcile the fact no copies of the early texts were preserved by Muslims? What we get scattered through different museums are some fragments and that too from a later period.

The Muslim tradition also tells us that when Usman compiled the Quran, he ordered the destruction of all other existing copies scattered throughout the fledgling empire. What was the need to do so? There were revolts at some places as their codices did not become part of the official Quran. The Shia still complain that Ali’s Quran was not taken into consideration. If Muslims believe that only Usman possessed the correct version of the Quran, then what about those early Muslims who were revolting against such a compilation? Is there any way to ascertain that Usman’s compilation did not omit any of the verse that were previously considered part of the Quran? Certainly not. We know that the verse of Rajm did not become part of this Quran. Does this mean that ultimately the consensus on Usman’s Quran was more a matter of politics rather than faith?

Muslims might have been wise to give their allegiance to a single official Quran so that dissensions within the community can be minimized. But then, this takes away their claim that the Quran is the very word of God as recorded on the very heart of Muhammad.